MANILA: The Philippine justice department on Monday struck down an order for the deportation of an Australian nun after she joined a political rally, sparking celebrations among her supporters.

The Catholic nun, Patricia Anne Fox, 71, who is head of a congregation, had angered President Rodrigo Duterte after she was spotted in April at a rally in support of human rights.

Duterte had accused her of "disorderly conduct", and ordered she be investigated as part of moves against "undesirable foreigners".

The immigration bureau said Fox had engaged in activities not allowed under the terms of her visa and revoked it. She was due to leave on Monday.

But the Department of Justice said the bureau's order "has to be struck down" because it had acted "beyond what the law provides". 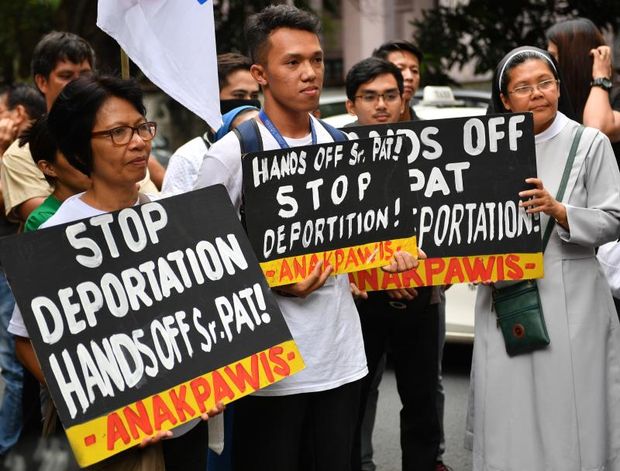 Supporters of Australian nun Patricia Fox display placards in front of the Department of Justice office as the nun filed an appeal for her deportation order in Manila on May 25, 2018. (AFP photo)

The decision means she can stay in the Philippines until her visa expires in September.

The left-wing Bayan (Nation) group and the nun's supporters celebrated with a mass in a church in Manila.

"We are happy for Sister Pat and hope that she continues her good work for the Filipino poor," Renato Reyes, Bayan secretary-general, said, thanking the justice department "for exercising fairness".

Fox has been living in the country for more than 27 years and has been very active in poor communities.