ZHARKENT, Kazakhstan: Secretive "re-education camps" allegedly holding hundreds of thousands of people in a Muslim-majority region in western China are the focus of an explosive court case in Kazakhstan, testing the country's ties with Beijing.

On trial is Sayragul Sauytbay, an ethnic Kazakh Chinese national who is accused of illegally crossing the border to join her husband and two children in Kazakhstan.

But it is the 41-year-old's testimony about her forced work in the camp system in the Xinjiang region that has drawn the most attention.

Beijing has stepped up a crackdown in Xinjiang against what it calls separatist elements.

At a public hearing, Sauytbay said she was granted access to classified documents that shed light on the sprawling network of re-education centres. 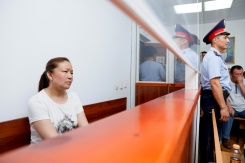 China's predominantly Muslim ethnic minority groups are believed to make up the majority of the camps' populations.

Chinese authorities have denied the existence of such facilities despite mounting evidence from both official documents and testimonies from those who have escaped them.

Asked under oath about a so-called "camp" where she worked as an employee of the Chinese state, court spectators gasped when Sauytbay replied it held some 2,500 ethnic Kazakhs.

"In China they call it a political camp but really it was a prison in the mountains," she said.

Sauytbay said authorities had told her she would never be allowed to enter Kazakhstan, where her family had obtained citizenship.

"That I am discussing this camp in an open court means I am already revealing state secrets," said Sauytbay, who asked Kazakhstan not to send her back to China.

Ethnic Kazakh woman is appealing to the Kazakh govt for political asylum after illegally crossing the border from Xinjiang into Kazakhstan. In Almaty court she told a judge that she worked for the Chinese state and oversaw 2,500 prisoners in reeducation camp in northwest China. pic.twitter.com/p2foBA3eCn

- 'This person will disappear' -

Sauytbay is one of many ethnic Kazakhs separated from relatives over the border after a crackdown in Xinjiang, where authorities cite separatist and extremist threats as justification for repressive policies.

There are about 1.5 million ethnic Kazakhs in Xinjiang.

They had however avoided extreme state repression suffered by Uighurs, another mostly Muslim Turkic group that forms a demographic majority in many parts of the region.

Unlike Uighurs, ethnic Kazakhs had long moved freely between China and their historic homeland.

About 200,000 of them became Kazakh citizens since the Central Asian country's independence in 1991.

That freedom disappeared however after a Chinese official known for his aggressive surveillance and population control measures in Tibet took charge of the nominally autonomous region in 2016, overseeing mass detentions and programmes of re-education for Muslims.

In late 2016 authorities took the unprecedented step of calling in Muslim minorities' passports, forcing anyone needing to leave the country to file official requests.

Sauytbay's husband Wali Islam testified that for several months the family lost contact with her after she was reassigned to a re-education centre from a state kindergarten.

Sauytbay told the court she had been tricked into working at the camps by authorities.

The family was reunited only after she crossed the border this April. Kazakh security services arrested her on May 21.

Sauytbay's lawyer Abzal Kuspanov said the testimony of his client -- who briefly consoled her 13-year-old daughter as she was ushered into the dock by police -- was a sufficient indicator as to what will await her if she returns to China.

"We are not saying that she has not committed a crime by violating state borders using false documents. We have admitted that to the court and we are prepared to accept punishment," Kuspanov told AFP Friday.

"What we are saying is -- don't give her back to China. If we do send her back, this person will simply disappear," said Kuspanov.

After two sessions with Chinese since April, Kazakh Foreign Minister told journalists in Astana today that there are 170 known cases of ethnic Kazakhs in detention or reeducation camps in China's Xinjiang province. Kazakhstan is working with Beijing to get them resolved. pic.twitter.com/FWEyrToxzz

The situation of ethnic Kazakhs in Xinjiang is embarrassing for Kazakhstan, which is China's leading economic partner in Central Asia.

While the government is hesitant to confront Beijing, it is under growing pressure to speak out against the repression.

China has enlisted oil-rich Kazakhstan as a key partner in its trillion dollar Belt and Road initiative aimed at improving overland trade routes between Europe and Asia.

So far Beijing has kept silent on the allegations: two Chinese diplomats present at the hearing refused to answer questions from activists and journalists.

Under public pressure, Kazakhstan's foreign ministry has called for "an objective and fair review" of detentions of Kazakh citizens in the region.

But Kazakhstan, which is seeking massive investments from China, is in a poor position to lobby for the rights of Chinese citizens like Sauytbay.

Her trial is a test "of the maturity of Kazakhstan-China relations", said Serikzhan Mambetalin, a Kazakh political activist.

But if Kazakhstan hands a member of the diaspora back to China, "people will say the government cannot protect its own people," he said.

Russian and UK defence ministers to meet over Ukraine