NORFOLK, Virginia: Adrian Cronauer, the man whose military radio antics inspired a character played by Robin Williams in the film <i>Good Morning, Vietnam</i>, has died. He was 79.

Mary Muse, the wife of his stepson Michael Muse, said Thursday that Cronauer died Wednesday from an age-related illness. He had lived in Troutville, Virginia, and died at a local nursing home, she said.

During his service as a US Air Force sergeant in Vietnam in 1965 and 1966, Cronauer opened his Armed Forces Radio show with the phrase, "Goooooood morning, Vietnam!"

Below is an actual air check from Armed Forces Vietnam (AFVN) radio of a Cronauer opening of his Dawnbusters show.

Williams made the refrain famous in the 1987 film, which was very loosely based on Cronauer's time in Saigon.

The film was made almost entirely in Thailand, principally on sets in Bangkok and Nakhon Pathom. A disused Thai radio station was decorated as the Saigon radio studio,

It was a departure from other Vietnam war movies that focussed on bloody realism, such as the Academy Award-winning Platoon. Instead, it was about irreverent youth in the 1960s fighting the military establishment.

"We were the only game in town and you had to play by our rules," Cronauer said in an interview in 1987. "But I wanted to serve the listeners."

The military wanted conservative programming. American youths, however, were "not into drab, sterile announcements" with middle-of-the-road music, Cronauer said, and the battle over the airwaves was joined.

In the film, Williams quickly drops Perry Como and Lawrence Welk from his 6am playlist in favour of the Dave Clark Five.

Cronauer said he loved the movie, but he said much of the film was Hollywood make-believe. Robin Williams' portrayal as a fast-talking, nonconformist, yuk-it-up disc jockey sometimes gave people the wrong impression of the man who inspired the film.

"Yes, I did try to make it sound more like a stateside station," he said. "Yes, I did have problems with news censorship. Yes, I was in a restaurant shortly before the Viet Cong hit it. And yes, I did start each program by yelling, 'Good Morning, Vietnam!'"

The rest is what he delicately called "good script crafting." 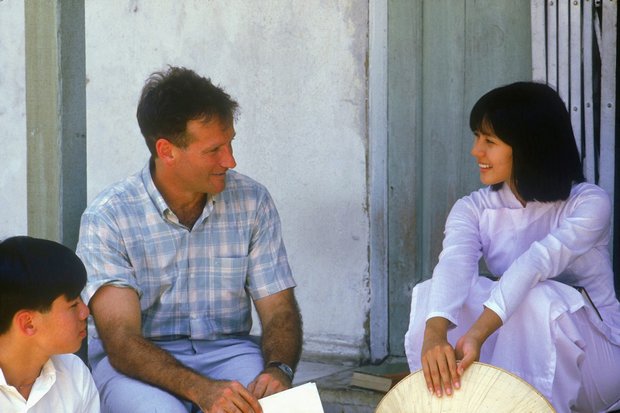 When the film was released, the presidential campaign of Democrat Jesse Jackson called asking if Cronauer would help out. The conversation died quickly after Cronauer asked the caller if she realised he was a Republican.

"In many ways, I'm a very conservative guy," he said. "A lifelong, card-carrying Republican can't be that much of an anti-establishment type."

Cronauer was from Pittsburgh, the son of a steelworker and a schoolteacher. After the military, he worked in radio, television and advertising.

In 1979, Cronauer saw the film Apocalypse Now with his friend Ben Moses, who also served in Vietnam and worked at the Saigon radio station.

"We said that's not our story of Vietnam," Moses recalled Thursday. "And we made a deal over a beer that we were going to have a movie called 'Good Morning, Vietnam'."

It wasn't easy. Hollywood producers were incensed at the idea of a comedy about Vietnam, said Moses, who co-produced the film and wrote the original 30-page story.

Moses said the film was a pivotal moment in changing the way Americans thought about the Vietnamese and the war.

Muse, the wife of Cronauer's stepson, said the movie "helped open dialogue and discussion that had long been avoided."

"He loved the servicemen and servicewomen all over the world and always made time to personally engage with them," she said.

She added that he was "a loving and devoted husband to his late wife Jeane (as well as a) father, grandfather and great-grandfather."

Cronauer attended the University of Pennsylvania's law school and went into the legal profession, working in communications law and later handling prisoner-of-war issues for the Pentagon.

"I always was a bit of an iconoclast, as Robin (Williams) was in the film," Cronauer said in 1999. "But I was not anti-military, or anti-establishment. I was anti-stupidity. And you certainly do run into a lot of stupidity in the military."

SAO PAULO: When she saw 13-year-old Brazilian Rayssa Leal win silver in the first-ever street skateboarding competition at the Summer Olympics in Tokyo, Giovanna Alves Farias only had one wish: to start flying around a skate park herself.