An injured woman waits alongside patients who were moved out of the Mataram City hospital into the street after the earthquake struck. (Antara Foto via Reuters)

LOMBOK, Indonesia: A powerful earthquake rocked Indonesia's Lombok Sunday, sending people running from their homes and triggering a tsunami alert that was cancelled.

The latest tremor had a magnitude of seven and struck just 10 km underground according to the US Geological Survey. It was followed by two aftershocks.

Many buildings are thought to have been damaged by the quake in Lombok's main city of Mataram, said Sutopo Purwo Nugroho, spokesman for Indonesia's disaster mitigation agency.

It occurred just a week after a quake killed 17 people on the holiday island.

Officials issued a tsunami warning, which was later cancelled

"Please go to a place with higher ground, while remaining calm and not panicking," Dwikorita Karnawati, head of the agency for meteorology, climatology and geophysics, told local TV.

"The latest data we have is 19 people are dead at Tanjung Hospital (North Lombok)," said Agus Hendra Sanjaya, Mataram search and rescue spokesman.

Two hours later, Muhammad Rum, head of the disaster management agency in West Nusa Tenggara province, which includes Lombok, told Indonesian TV the death toll had risen to 39 and could be worse.

Residents in Mataram described a strong jolt that sent people scrambling out of buildings.

"Everyone immediately ran out of their homes, everyone is panicking," said a local resident, Iman.

Electricity was knocked out in several parts of the city and patients were evacuated from the main hospital, witnesses and officials said.

Pictures showed patients lying on their beds outside the clinic while doctors in blue scrubs attended to them.

Singapore’s Home Affairs Minister K Shanmugam, who was in Lombok for a security conference when the earthquake struck, described on Facebook how his hotel room on the 10th floor shook violently.

"Walls cracked, it was quite impossible to stand up," he said. 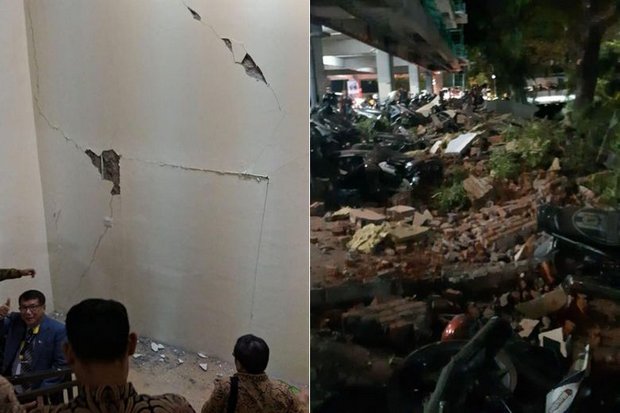 Singapore Law and Home Affairs Minister K. Shanmugam, in Lombok for a conference, was working on his laptop in his room on the 10th floor of a building when the quake struck. (Photos FB/k.shanmugam)

Sutopo Purwo Nugroho, spokesman for Indonesia's disaster mitigation agency, said many buildings were thought to have been damaged in Lombok's main city of Mataram.

"They are mostly buildings with weak construction material," Nugroho said.

Residents in Mataram described a strong jolt that sent people scrambling out of buildings.

"Everyone immediately ran out of their homes, everyone is panicking," Iman told AFP.

Another resident Rita Siswati, 47, said the quake knocked out electricity and patients were evacuated from the main hospital.

The epicentre was in the sea 18 km northwest of Lombok, the USGS said, far from the main tourist spots on the south and west of the island.

The USGS reported two aftershocks, one with a magnitude of 5.4.

The quake was felt some 100 km (60 miles) away on the bustling resort island of Bali, and there were early reports of damage including to Ngurah Rai International Airport.

"The first one lasted quite a while, the second one was only about 2-5 seconds. The first one was the bigger one," he said.

People could be heard screaming as locals and tourists ran onto the road.

The tremor came a week after a shallow 6.4-magnitude quake hit Lombok, killing 17 people and damaging hundreds of buildings.

Indonesia, one of the most disaster-prone nations on earth, straddles the so-called Pacific "Ring of Fire", where tectonic plates collide and many of the world's volcanic eruptions and earthquakes occur.

In 2004 a tsunami triggered by a magnitude 9.3 undersea earthquake off the coast of Sumatra in western Indonesia killed 220,000 people in countries around the Indian Ocean, including 168,000 in Indonesia.