KABUL - The wrestling mats were spattered with blood, the sports bags and water bottles still strewn across the floor Thursday, hours after a double bombing ripped through the Maiwand sports club in Kabul, killing at least 26 people. 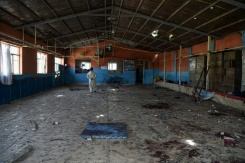 A suicide attack in a sports hall in Kabul targeted scores of wrestlers, some as young as 10

A regular training session on Wednesday afternoon turned into a massacre when a suicide bomber shot dead a young, unarmed guard at the entrance before blowing himself up near the scores of wrestlers, some of whom were as young as 10.

An hour later a car packed with explosives detonated outside the club, apparently targeting reporters and emergency workers who had gathered at the scene.

"There were dead and wounded everywhere," 14-year-old wrestler Sayed Rohullah told AFP from his bed at Isteqlal hospital, where dozens of casualties were taken after the twin blasts.

"Everyone was covered in glass and pieces of shrapnel, and shouting for their loved ones.

"After the explosion I couldn't feel my legs."

Most of the deaths were caused by severe burns and shrapnel, doctors said.

Ali Seena, 20, said the wrestlers had been in the middle of the training session when they heard cracks of gunfire outside. He did not see the suicide bomber enter the room, but he felt the "flying shrapnel" as it pierced his abdomen.

"I felt so much pain after the blast," said Seena, whose right hand was also hit by pieces of metal.

The Islamic State group claimed responsibility for the latest attack, which Afghan health and interior ministries said had killed at least 26 people and wounded 91.

Maiwand club manager Pahlawan Shir said he feared the real death toll may be much higher.

As many as 150 people were inside the hall in the heavily Shiite neighbourhood at the time of the attack, he said.

"Some people have already taken their martyrs home. I am still searching for many missing students and coaches."

Club employee Eid Mohammad said he saw a vehicle parked near the entrance as he carried some of the dead and wounded from the building.

"We were busy... and then the second explosion happened," said Mohammad, 50, who escaped injury.

Grieving relatives, friends and colleagues began the grim process of burying their loved ones on Thursday morning in dusty, barren cemeteries around the city -- rituals that have become all too familiar for war-weary Afghans.

The attack was widely condemned by Afghan and foreign officials.

"This latest cynical act of terror targeting ordinary citizens of Kabul, along with first responders and journalists, is deeply shocking," Tadamichi Yamamoto, the UN Secretary-General's Special Representative for Afghanistan, said in a statement.

"We join Afghans in expressing our revulsion at such a callous attack."

IS considers Shiite Muslims apostates and has ramped up attacks against the minority group in recent years.

The last major attack on Shiites in Kabul was on August 15 when a suicide bomber blew himself up in an education centre, killing dozens of students.

The group said it was behind that attack, which drew international condemnation and came amid a wave of deadly violence across the country.