US braces for 'major' hurricane Florence

MIAMI: The eastern United States braced Monday for the impact of "major" hurricane Florence as it threatened catastrophic flooding in areas already soaked by heavy rain. 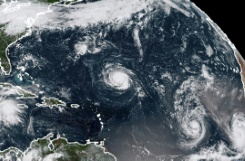 This US satellite image taken on September 9, 2018, shows (L-R) hurricanes Florence, Isaac and Helene in the Atantic Ocean

The storm was 625 miles (1,005 kilometers) southeast of the British North Atlantic island territory of Bermuda at 0900 GMT Monday, and was forecast "to become a major hurricane" Monday morning, the National Hurricane Center said.

Florence "is expected to remain an extremely dangerous major hurricane through Thursday," the NHC in Miami said.

It added: "The largest threat to life from hurricanes is not the high winds. Flooding is the deadliest result of these storms."

The US Navy ordered ships at its major base in Hampton Roads, Virginia, to put to sea, saying "the forecasted destructive winds and tidal surge are too great to keep the ships in port."

Heavy rain in the Washington area over the weekend had already led to flooding in historic Alexandria, Virginia, local media reported, and the National Weather Service issued a flood watch for part of the Potomac River.

Florence was "rapidly strengthening," with maximum sustained winds increased to 105 miles per hour, making it a Category 2 storm, the second-weakest on the five-level Saffir-Simpson hurricane scale.

"The center of Florence will move over the southwestern Atlantic Ocean between Bermuda and the Bahamas Tuesday and Wednesday, and approach the southeastern coast of the United Sates on Thursday," the NHC said.

The storm was moving west-northwest at around nine miles per hour, and was forecast to drench a large swath of the US East Coast running from northern Florida to New Jersey.

On its current track Florence is expected to slam the Carolinas and Virginia the hardest -- and all three states have issued emergency declarations to speed preparations.

"Everyone in North Carolina needs to keep a close eye on Florence and take steps now to get ready for impacts later this week," Cooper said.

The storm "is too powerful and its path is too uncertain to take any chances," South Carolina Governor Henry McMaster said, issuing his state's emergency declaration.

Florence was producing large swells expected to reach from the northern Caribbean to the southern coasts of Canada's Maritime provinces.

At this height of the Atlantic hurricane season, Florence was being trailed on east-to-west paths by two other hurricanes, Helene and Isaac.

Helene -- 305 miles west of the Cape Verde islands off the African coast -- had winds up to 85 miles per hour, and was expected to continue moving west-northwest for another couple of days, the NHC said in its 0900 GMT bulletin.

Hurricane Isaac -- which late Sunday became the fifth hurricane of the season -- is heading west towards the Caribbean.

At 0500 GMT Isaac, which the NHC called a small hurricane, was about 1,200 miles east of the Windward Islands -- a region still recovering from last year's powerful Hurricane Maria -- with maximum sustained winds near 75 miles per hour.

Isaac is expected to gain strength in the next day or two before beginning to weaken mid-week when it approaches the Lesser Antilles.

Maria -- which killed at least 3,057 people, most in Puerto Rico -- is believed to be the third-costliest tropical cyclone on record.