YANGON: Myanmar's powerful army should be removed from politics, UN investigators said Tuesday in the final version of a damning report reiterating calls for top generals to be prosecuted for genocide against the Rohingya Muslim minority.

A brutal military crackdown last year forced more than 700,000 Rohingya to flee over the border to Bangladesh. Demands have mounted for those who waged the campaign to face justice.

The UN's 444-page probe is the most meticulous breakdown of the violence to date. It says the military's top leadership should be overhauled and have no further influence over the country's governance. 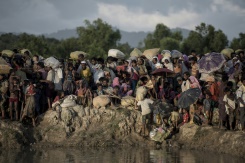 Myanmar's military dominates the Buddhist-majority nation, holding a quarter of seats in parliament and controlling three ministries, making their grip on power firm despite political reforms which began in 2011.

But the report said the country's civilian leadership "should further pursue the removal of the Tatmadaw from Myanmar's political life", referring to the nation's armed forces.

The UN's analysis, based on 18 months' work and more than 850 in-depth interviews, urges the international community to investigate the military top brass for genocide, including commander-in-chief Min Aung Hlaing.

Myanmar's army has denied nearly all wrongdoing, insisting its campaign was justified to root out Rohingya insurgents who staged deadly raids on border posts in August 2017.

But the UN team said the military's tactics had been "consistently and grossly disproportionate to actual security threats".

The report says an estimated 10,000 people were killed in the crackdown and that was likely a conservative figure.

Investigators said the Tatmadaw should be restructured and the process should begin by replacing the current leadership.

Myanmar only recently emerged from almost a half-century of military junta rule and Aung San Suu Kyi's democratically-elected government remains in a delicate power balance with the generals.

Their presence in parliament gives them an effective veto on constitutional changes, making any transition to full civilian control extremely difficult.

"It is impossible to remove the army out of political life without changing the constitution, and the military have a veto over constitutional changes," Mark Farmaner, from Burma Campaign UK, told AFP.

The UN team said there were reasonable grounds to believe that the atrocities -- including systematic murder, rape, torture and arson -- were committed with the intention of destroying the stateless Rohingya, warranting the charges of genocide.

The mission, created by the UN Human Rights Council in March 2017, did not focus its sights entirely on the army.

It directed specific criticism at Suu Kyi, whose global reputation has been shattered by her failure to speak up for the Rohingya against the military.

While acknowledging that the civilian authorities have little influence over military actions, the report said that their "acts and omissions" had "contributed to the commission of atrocity crimes".

Pointing to "deeply entrenched" impunity in Myanmar, the investigators said the only chance to obtain accountability was through the international justice system.

They also pointed to failings of the UN's office within Myanmar, alleging that "quiet diplomacy" was prioritised and that those who tried to push the UN's Human Rights Up Front approach were "ignored, criticised, sidelined or blocked in these efforts".

The independent UN team will present its findings to member states of the Human Rights Council in Geneva later on Tuesday, after which Myanmar will have a chance to respond to the allegations.

It also repeated suggestions that crimes against the Rohingya be referred to the International Criminal Court, which concluded in August that it had jurisdiction to investigate even though Myanmar is not a member of the treaty underpinning the tribunal.

Myanmar has dismissed the tribunal’s authority and analysts have pointed to the court's lack of enforcement powers.

The investigators also recommended an arms embargo and "targeted individual sanctions against those who appear to be most responsible".

The level of brutality used by Myanmar's military against the Rohingya minority is "hard to fathom" –– UN investigator https://t.co/QQ5Z3aaTpJ pic.twitter.com/7gcNyjBHHO