The Asian Development Bank has raised its forecast of Thai GDP growth, but it is still the lowest among Asean's developing nations. (File photo)

The Asian Development Bank (ADB) has raised Thailand's economic growth forecast to 4.5% this year and 4.3% in 2019 after robust growth of 4.8% in the first half amid improving economic prospects.

Public investment should remain strong based on the government's big-ticket infrastructure investment, while exports and tourism should also contribute to growth, Mr Ng said.

But high household debt of 77% of GDP at the end of the first quarter may constrain household spending, according to the latest report.

ADB's outlook supplement report issued in July upgraded Thailand's economic growth outlook to 4.2% from 4% predicted in the April report but kept its forecast for 2019 unchanged at 4.1%.

The Manila-based institute's latest view is more optimistic than the Bank of Thailand's forecasts of 4.4% this year and 4.2% in 2019.

Mr Ng said Thailand's inflation remains benign at 1.3% this year and 1.4% next, hovering at the bottom end of the Bank of Thailand's target range of 1-4%.

In the first eight months of this year, headline inflation year-on-year averaged 1.1% and core inflation averaged 0.7%, both up from 0.6% in the same period last year.

Regarding the US Federal Reserve's continuous rate hikes that have caused several emerging markets to come under pressure, he said that ample foreign reserves and a considerable current account surplus should safeguard Thailand from external shocks.

The second-largest economy in Southeast Asia has international reserves of more than US$200 billion (6.49 trillion baht), enough to cover 10 months of imports and then some.

"With inflationary pressures edging up but firmly under control, and with the balance of payments still comfortable despite capital outflow and baht depreciation, the central bank kept its policy interest rate unchanged at a low 1.5% to support the economy and firm up the economic rebound," ADB said.

Southeast Asia's growth is forecast at 5.1% this year, slightly lower than the previous view, as a combination of factors -- moderation in export growth, softer domestic demand, subdued agriculture, higher inflation, net capital outflows and a worsening balance of payments -- is dimming the growth outlook for this year in six of the 10 economies in the subregion, the ADB's updated report said.

The six economies are Indonesia, Laos, Malaysia, Myanmar, the Philippines and Vietnam.

Thailand and Brunei, by contrast, look set to outperform earlier forecasts, while Cambodia and Singapore will likely meet prior projections, the report said. 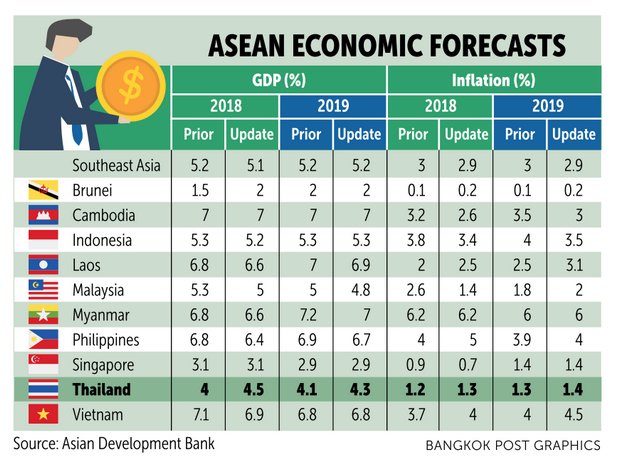