5,000 missing as aid pours into Indonesian city hit by quake-tsunami

This aerial photograph shows devastation from soil liquefaction at Petobo in Palu on Sunday following the Sept 28 earthquake and tsunami. (AFP)

PALU, Indonesia: Five thousand people are now thought missing as aid poured into disaster-ravaged Palu on Sunday after days of delays as efforts ramped up to reach 200,000 people in desperate need following a deadly quake-tsunami in the Indonesian city.

The number of people believed missing has soared to 5,000, an official said Sunday, an indication that far more may have perished in the twin disaster than the current toll.

Indonesia's disaster agency say they have recovered 1,763 bodies so far from the 7.5-magnitude and subsequent tsunami that struck Sulawesi on Sept 28.

But there are fears that two of the hardest-hit neighbourhoods in Palu -- Petobo and Balaroa -- could contain thousands more victims, swallowed up by ground that engulfed whole communities in a process known as liquefaction.

"Based on reports from the (village) heads of Balaroa and Petobo, there are about 5,000 people who have not been found," agency spokesman Sutopo Purwo Nugroho told reporters Sunday.

"Nevertheless, officials there are still trying to confirm this and are gathering data. It is not easy to obtain the exact number of those trapped by landslides, or liquefaction, or mud." 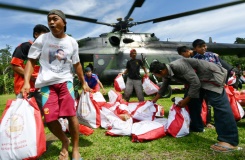 Nugroho said the search for the unaccounted would continue until Oct 11, at which point they would be listed as missing, presumed dead.

The figure drastically increases the estimates for those who disappeared when the disaster struck 10 days ago. Officials had initially predicted some 1,000 people were buried beneath the ruins of Palu.

But the latest tally speaks to the considerable destruction in the worst-hit areas of Petobo and Balaroa as the picture on the ground has become clearer.

Planeloads of food, clean water and other essentials were offloaded at Palu on Sulawesi island, where at least 1,649 people were killed when a powerful earthquake and a wall of water levelled parts of the region.

Looters ransacked shops in the aftermath of the disaster more than a week ago, as food and water ran dry and convoys bringing life-saving relief were slow to arrive.

But the trickle of international aid to Palu and local efforts to help the survivors have accelerated in recent days.

More than 82,000 military and civilian personnel, as well as volunteers, have descended on the devastated city while Indonesian army choppers are running missions to deliver supplies to remote parts of the region that were previously blocked off by the disaster.

"They are in great need because the road is cut off and it's accessible only by air", Second Lieutenant Reinaldo Apri told AFP after piloting a chopper to rugged Lindu district, some 40 kilometres (25 miles) south of Palu.

Tonnes of donations from Australia and the United States reached Palu on Sunday morning aboard Hercules military aircraft.

A plane chartered by Save the Children was also expected to land in the coastal city with emergency shelters and water purification kits, along with another aircraft carrying a medical team from South Africa.

Palu beach front. Wiped out. A little further down the road, The smell of dead bodies was almost overwhelming #gempa pic.twitter.com/kc25Is7Db3

Teams of Indonesian Red Cross workers set up warehouses and fanned out to distribute supplies across the region, where the double-punch disaster reduced entire neighbourhoods to rubble.

Getting vital supplies to the affected areas has proved hugely challenging, with only a limited number of flights able to land at Palu's small airport, forcing aid workers to take gruelling overland journeys.

The tens of thousands left homeless by the disaster are scattered across Palu and beyond, many squatting outside their ruined homes or bunkered down in makeshift camps and entirely dependent on handouts to survive.

In Palu's central market, hundreds of people waited in line for essential food items being distributed by soldiers.

"There is nowhere else to get food, nowhere is open," said 18-year-old Sela Fauziah as she queued for aid.

Even as aid trickled into the region, exhausted survivors were heading in the opposite direction.

Thousands have streamed out of Palu to nearby cities, many waiting days to board military flights.

Anam was among 100 civilians at Palu airport lucky enough to board a Hercules military flight on Sunday.

"I am happy to finally get a plane. I have been waiting for three days," the 33-year-old told AFP.

Hope of finding survivors has all but faded, as authorities moved closer to calling off the search for the dead and declaring devastated areas mass graves.

Muhammad Syaugi, the head of Indonesia's search and rescue agency, said it was unlikely anyone trapped would still be alive.

"This is Day 10. It would be a miracle to actually find someone still alive," he told AFP on Sunday.

There are fears that vast numbers of decomposing bodies could still be buried beneath mud and concrete with rescue workers struggling to extract bodies trapped in the muck, as the earth hardens in the tropical sun.

With hospitals overstretched and short on staff and supplies, medical teams were yet to reach some of the hardest-hit far-flung villages.

"Today, my team and I want to go to Sigi, because that area has been untouched by paramedics," doctor Arsanto Tri Widodo told AFP, referring to one of the worst-hit areas.

The United Nations said Friday it was seeking $50.5 million "for immediate relief" to help victims.

Indonesia sits along the world's most tectonically active region, and its 260 million people are vulnerable to earthquakes, tsunamis and volcanic eruptions.

MADRID: Opera star Placido Domingo, facing multiple allegations of sexual harassment, on Tuesday apologised for "the hurt" caused to his accusers, saying he accepted "full responsibility" for his actions.

Five of the six suspects in the abduction-murder of a senior judge's elderly brother have confessed, but accused mastermind Banyin Tangpakorn was holding out, police sources said.