PORT MORESBY - As an openly gay man in Papua New Guinea, where sex between men is illegal and stigma and violence widespread, 24-year-old Kapera Patrick remembers thugs pelting him with abuse, stones and bottles. 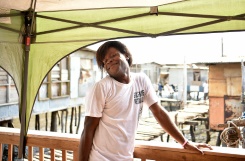 Kapera Patrick outside his home in Hanuabada, a settlement in Port Moresby that has become a haven of tolerance, offering sanctuary for dozens in a gay community that is gradually coming out of hiding

His life changed when he was taken in by a family in Hanuabada, a settlement in Port Moresby that has become a haven of tolerance, offering sanctuary for dozens in a gay community that is gradually coming out of hiding.

A ramshackle collection of thousands of dwellings built on stilts over the water and connected by rickety and treacherous wooden planks, Hanuabada is a world away from the sanitised districts of the capital that recently played host to Asia-Pacific leaders.

The sprawling settlement, whose name means "big village" in the local Motu language, was built over the sea as locals believe the water protects them from sorcery coming down from the mountains.

A caged pig squats outside many of the huts -- for meat or barter -- and naked children at play squeal with delight as they skip expertly on the narrow and often broken planks that serve as the village's "streets".

Home to as many as 50,000, Hanuabada has become synonymous with a small but thriving gay, lesbian and transgender community that has flocked here as word spread that they would be safe.

"I used to live in a place called Joyce Bay and I got abused. They threw bottles at me, stones at me. And then I heard about this place. I came here and the family brought me in and accepted me," says Patrick, who does informal jobs to get by.

Hanuabada is "a very free place and the people know me. They don't abuse me. I've been accepted for my sexuality," he told AFP, speaking through an interpreter in his native Pidgin.

While nothing like as open as the West, the community has still hosted small drag parties and men both gay and curious come to Hanuabada to meet up, many having their first sexual experiences here.

"They used to live outside but some of their friends brought them here," she said. "The community knew them and protected them."

Now the only "abuse" Patrick gets is affectionate and good-natured.

His friends refer to him as "she" and "sister", and wolf-whistle when he poses with -- possibly exaggerated -- campness for photos.

People in the village have accepted the gay community "because that's the way they are," said Baita.

Parker Hou, who was once beaten up and deliberately burned for his sexuality, said the law meant "illegal" gay people lack access to medical services -- explaining the high rate of HIV.

The law "causes most of our friends to go into hiding. If I'm infected, I'm too scared to go to the clinics," said the 44-year-old, who is campaigning to change what he derides as an "English Victorian law from the 1800s".

"We are using this English law to discriminate against our own Papua New Guinean citizens. I find it just silly," he said with sadness in his voice.

Low levels of education -- nearly half the population is illiterate in the poverty-stricken country -- also plays a huge factor in prejudice faced by the community, says David Lawrence, a prominent gay rights activist.

Bullied and hounded out of school, Lawrence twice attempted suicide but has since become a vocal campaigner and met Queen Elizabeth in 2015 after winning an award for his work.

He said he has met gay people raped for their sexuality and at least three have been murdered, allegedly by "ashamed" members of their family or community.

Members of the community mainly contact each other via Facebook -- often using fake accounts -- and "can express themselves freely" without fear of retribution, said Bola, adding that he had seen a shift in the past 10 years.

Bola works with clinics on changing attitudes in the medical profession but admits it can be a struggle at times.

Being gay in Papua New Guinea is "like survival of the fittest", said the affable 51-year-old.

But small pockets of tolerance like Hanuabada show that attitudes can change with increased "exposure" to the LGBT community, campaigners say -- something Marelyn Baita has seen first-hand with her father.

"When he first came here, seeing gay people, my father couldn't try to understand them. He was so angry. They are men but they tend to... dress up like ladies," she said with a smile.

"He was angry but they continued to live with us year after year and he came to accept them."