PANAMA CITY - The government of Panama awarded Tuesday a Chinese consortium a $1.4 billion contract to build a bridge over the Panama Canal, a day after a visit by President Xi Jinping. 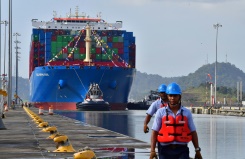 A Chinese firm has won the $1.4 billion contract to build a bridge over the Panama Canal

That tour was part of China's efforts to extend its political and economic influence in Latin America.

"Panama is moving ahead in its relations with China and without a doubt this project that begins its construction today is part of that message and trust between the two countries," Panamanian President Juan Carlos Varela said.

The order will allow a consortium called Panama Cuarto Puente, composed of China Communications Construction Company (CCCC) and its unit China Harbour Engineering Company (CHEC), to design and build a bridge over the Panama Canal.

It will be one of the largest construction projects in Panamanian history.

During his visit Xi and Varela signed a score of infrastructure, tourism and development cooperation agreements as Panama became the first Latin American country to partner with Beijing's giant multi-billion dollar "Belt and Road" development initiative.

A 63-year-old US national accused of defrauding bank customers has been arrested in Hua Hin one day before the statute of limitations expired, police said on Friday.