Roma desperate to avoid nightmare before Christmas at Juve
World

Roma desperate to avoid nightmare before Christmas at Juve

MILAN - Embattled Roma travel to Turin on Saturday desperate to bring some Christmas cheer back to their beleaguered fans in the capital by pulling off an upset against Cristiano Ronaldo's Juventus. 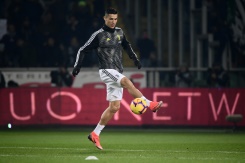 Cristiano Ronaldo will play Roma for the seventh time, but first with Juventus

Unbeaten Italian champions Juventus have had a record-breaking start to the season since their blockbuster signing of Ronaldo in the close-season for 100 million euros ($117 million).

The 33-year-old has started every one of Juventus' 16 league games, scoring 11 goals, being substituted just once, in the final ten minutes against Fiorentina this month after he scored the third goal from the spot.

Massimiliano Allegri's side have dropped just two points at home against Genoa, and are on course for an eighth consecutive Scudetto -- eight points clear of second-placed Napoli, with Inter Milan a further six points adrift in third.

By contrast Roma, after finishing third last season, are in the doldrums after the departure of key players including goalkeeper Alisson and midfielders Radja Nainggolan and Kevin Strootman.

They are seventh, with just six wins, including last weekend's 3-2 success over Genoa, but are 22 points behind Juventus.

A defeat on Saturday would see them slip 25 points behind before they host Sassuolo on December 26 and travel to promoted Parma to round off the year.

Juve travel to Atalanta and host Sampdoria in their final two matches before the three-week winter break.

"We are prepared and know that they are prepared too, so I expect it to be a great game for players and fans."

Juventus clinched their seventh straight league title last May with a 0-0 draw against Roma at the Stadio Olimpico.

Ronaldo will play his first match against Roma for Juventus but the former Manchester United and Real Madrid striker knows the club well.

He has faced them six times -- winning five -- including a memorable Champions League quarter-final return leg at Old Trafford in 2007.

United lost at the Stadio Olimpico 2-1, but thrashed Roma 7-1 at home.

"When it was 6-0, an opponent begged me to stop dribbling. Others threatened to hurt me," recalled Ronaldo, who scored a double on the night, and has claimed five goals in five Champions League games against the Romans.

Roma captain Daniele De Rossi pulled a goal back that night for his side in Manchester, but the 35-year-old is currently one of a number of key players out injured.

"Perhaps we can find some luck through our bad luck," said De Rossi, whose side are nevertheless through to the Champions League knockout rounds.

"We are in a tough spell, we know that all of us, not just the coach, are under scrutiny.

"Then the pressure of facing Juventus is only something on top of that.

"So we all really want to put in a great performance in Turin, more for us than because it is a big, important game."

Roma's record in Turin is poor, however, having never won in seven previous trips to the Allianz Stadium.

Behind the champions, Napoli will be pushing to keep pace as they host SPAL, who are four points clear of the relegation zone, before a tricky trip to Inter Milan on Wednesday.

Inter also have a chance to close the gap against bottom club Chievo before locking horns with Carlo Ancelotti's southerners.

Fourth-placed AC Milan host Fiorentina after being held to a goalless draw against Bologna this week, to drop five points behind their city rivals.

Lazio, in fifth, host Cagliari after losing to Atalanta last time out, to stretch their winless run to five league games.