LIMA - Australia's Toby Price clinched his second Dakar motorcycling title despite riding the 5,000km route with a broken wrist and feeling like "five people were driving a knife" into his injury. 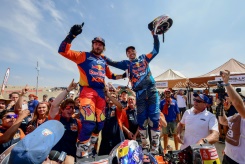 The 31-year-old followed up 2016 Dakar crown with success in the 10th and final stage on Thursday's final run over the sand dunes of Peru.

Victory was achieved despite Price having suffered a broken bone in his wrist on the eve of the race.

"I'm so damned stoked. It's been a long 10 days. Now I'll just wait and see what damage I've done to my wrist," said Price.

"The pain and torture has been worth it. I thought I would only be able to do two stages and then pull out and that would have been me done, but the support from everyone back home in Australia and then having some things go my way and a bit of luck, it just worked out in the end.

"Pretty much all I can say is that it feels like there are about five people driving a knife in my wrist now."

The KTM rider seized overall command of the bikes category on Tuesday and after crossing the finish line in Lima he took the 2019 honours by over nine minutes from his teammate and defending champion Matthias Walkner.

Price wrapped up his second title in style, taking the closing stage from Pisco to the Peruvian capital with a near two-and-a-half minute advantage over Chilean rider Jose Cornejo.

This was an 18th consecutive bikes title for Austrian bike manufacturer KTM.