TAMPA - Should healthy people take aspirin to ward off heart disease? The notion has been controversial, and the medical advice mixed. 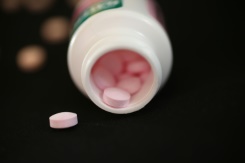 Aspirin can help prevent blood clots -- but also boosts the risk of hemorrhage in the brain, stomach and intestines

But a review of scientific data on the topic Tuesday showed that any benefits are slight, and are counterbalanced by a matching rise in bleeding risks.

Aspirin is a blood thinner and can help prevent clots that may lead to heart attack or stroke. But aspirin also boosts the risk of hemorrhage in the brain, stomach and intestines.

"When considering the totality of evidence, cardiovascular benefits associated with aspirin were modest and equally balanced by major bleeding events," said the report in the Journal of the American Medical Association.

The meta-analysis examined 10 prior studies involving a total of more than 164,000 people with an average age of 62.

Comparing aspirin users to those who don't take aspirin, researchers found "significant reductions" in strokes, heart attacks and deaths from cardiovascular disease among those who took aspirin.

Aspirin use was also linked to an increased risk of "major bleeding events compared with no aspirin," it said.

Statistically, the benefits were close to the risks.

If 10,000 people without heart disease took no aspirin for a year, 61 of them would have a heart attack or stroke, explained Kevin McConway, emeritus professor of applied statistics at The Open University.

If 10,000 similar people took aspirin for a year, 57 of them would have a heart attack or stroke.

"Only four fewer in 10,000, but that still has some importance given how common such diseases are and how serious cardiovascular disease is," said McConway, who was not involved in the study.

Heart disease is the top killer of people worldwide, taking 17.9 million lives around the planet each year, for one-third of all deaths, says the World Health Organization.

"The downside is the increase in major bleeding events, including bleeding inside the skull and brain or major bleeds in the stomach or gut," added McConway.

In a non-aspirin-taking pool of 10,000 people, 16 would have such an event in a year, compared to 23 among aspirin-takers.

In other words, about seven more major bleeds annually, which McConway described as a "substantial increase," even though the annual risk of a hemorrhage "is still not high."

According to Jeremy Pearson, associate medical director of the British Heart Foundation, the meta-analysis "valuably updates our knowledge, but does not change the current perspective.

"It confirms that the average risk of harm exceeds benefit, so that guidelines should not be changed."

Aspirin is not recommended in Britain for prevention of heart disease.

But in the United States, the US Preventive Services Task Force recommends "initiating low-dose aspirin use for the primary prevention of cardiovascular disease (CVD) and colorectal cancer in adults aged 50 to 59 years who have a 10 percent or greater 10-year CVD risk, are not at increased risk for bleeding, have a life expectancy of at least 10 years."

According to a recent nationwide survey of US adults, about half reported regular aspirin use.

Sean Zheng, a cardiologist at King's College Hospital and lead author of the JAMA report, said the public may not understand that taking low-dose, or baby aspirin, carries significant risks.

"In my opinion, there is no place for routine use of aspirin in patients who are healthy," he told AFP.

"Maybe it's because it's over the counter and it's described as a baby aspirin, but actually our data show that there is a very real risk, and you shouldn't take it with the expectation that it's completely benign and safe."

The study also delved into aspirin's preventive benefits when it comes to cancer, and found "no overall association between aspirin use and incident cancer or cancer mortality."

The review pointed out one study that had found a 15 percent reduction in cancer death associated with aspirin use after five years of follow-up.

However, the same findings were not replicated in a second trial, which followed almost 500 patients for seven years.

"The findings of this study suggest that the association of aspirin with cancer outcomes is neutral, with no suggestion of harm or benefit from the available current evidence," said the JAMA report.