ISLAMABAD: Saudi Arabia's powerful crown prince arrives in Pakistan on Sunday, the start of an Asian tour during which he will seek lucrative contracts and demonstrate he still has allies five months after the Khashoggi affair. 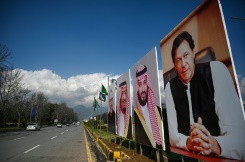 Crown Prince Mohammed bin Salman will kick off his Asia trip in Pakistan, one of Saudi Arabia's key regional allies

Mohammed bin Salman, widely known as "MBS", is expected to land in the capital Islamabad and stay in Pakistan until Monday.

His trip comes amid high tensions in the region: India and Saudi Arabia's arch-rival Iran -- both bordering Pakistan -- have accused Islamabad of backing militant groups which have carried out bloody suicide attacks on their soil in recent days.

After Pakistan, MBS will travel to India, where he will meet Prime Minister Narendra Modi and Petroleum Minister Dharmendra Pradhan.

He is expected to finish the trip with a visit to China on Thursday and Friday.

Two short stops initially scheduled for Sunday and Monday in Indonesia and Malaysia were postponed on Saturday without explanation.

The Asia trip comes five months after the murder of journalist Jamal Khashoggi, a fierce critic of MBS, at the Saudi consulate in Istanbul ignited a diplomatic crisis.

Riyadh initially denied the murder, then gave several conflicting accounts of Khashoggi's death, and now claims he was killed in an unauthorised operation.

Turkey said Friday it has not yet revealed all the information it has uncovered in the extraordinary case, which launched a global wave of revulsion and has profoundly tarnished the image of the kingdom, especially that of the crown prince.

But for analysts, the Asia tour -- the largest outing on the international scene for the crown prince since his participation in the G20 summit in Argentina last December -- is a timely demonstration to the West that he still has friends in rising Asia.

He "wants to demonstrate that he is not an international pariah", said James M. Dorsey, a researcher at the S. Rajaratnam School of International Studies in Singapore.

It is a matter of proving that he still has "international access and he can function... as the most senior representative of Saudi Arabia beyond the king".

Li Guofu, director of Middle East studies at the China Institute of International Studies, a government-affiliated think tank, noted that the Khashoggi case continues to cause indignation in Western countries, so visiting them would have been "inconvenient".

"Not travelling to the West does not mean that he cannot come to the East. Saudi Arabia is also making strategic adjustments, and Asia is the new main direction of Saudi diplomacy," he said.

Asian countries, he added, "have an important special characteristic -- that is, we don't interfere in the internal affairs of other countries".

"China is the largest buyer of Saudi crude, and Saudi Arabia's other largest clients are all Asian: India, Japan, South Korea," said Dorsey.

"Asia is a source of inward investment into Gulf energy and infrastructure investment; and the future growth of the global economy will be in Asia," said Karen Young, an analyst with the American Enterprise Institute.

Saudi Arabia is not the only Gulf state to pivot east, she added -- for all of them, it is a "logical shift".

As for Pakistan, where MBS will begin his tour and which is facing a serious balance of payments crisis, it hopes its old ally will throw the struggling economy a lifeline, specifically in the form of a $10-billion investment in a refinery and oil complex in the southwest of the county.

The crown prince's visit to Islamabad will also apparently coincide with possible new talks between the Taliban and the United States on Afghanistan.

The militants announced the discussions would be held in the Pakistani capital on Monday, adding they would also meet Khan. But the US said it has not been invited and Pakistan has not confirmed talks are being held that day.

Saudi Arabia and Pakistan are both involved in a months-long push led by Washington aimed at ending the conflict in Afghanistan.

It was not immediately clear if MBS would participate in any further discussions on the topic Monday.