PARIS - A second person is in sustained remission from HIV-1, the virus that causes AIDS, after ceasing treatment and is likely cured, researchers were set to announce at a medical conference Tuesday. 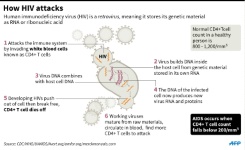 Ten years after the first confirmed case of an HIV-infected person being rid of the deadly disease, a man known only as the "London patient" has shown no sign of the virus for nearly 19 months, they reported in the journal Nature.

"By achieving remission in a second patient using a similar approach, we have shown that the Berlin patient was not an anomaly," said lead author Ravindra Gupta, a professor at the University of Cambridge, referring to the first known functional cure.

Millions of people infected with HIV around the world keep the disease in check with so-called antiretroviral therapy (ARV), but the treatment does not rid patients of the virus.

"At the moment, the only way to treat HIV is with medications that suppress the virus, which people need to take for their entire lives," said Gupta.

"This poses a particular challenge in developing countries," where millions are still not receiving adequate treatment, he added.

Close to 37 million people are living with HIV worldwide, but only 59 percent are receiving ARV. Nearly one million people die every year from HIV-related causes.

A new drug-resistant form of HIV is also a growing concern.

Gupta and his team emphasised that bone marrow transplant -- a dangerous and painful procedure -- is not a viable option for HIV treatment.

But a second case of remission and likely cure following such a transplant will help scientists narrow the range of treatment strategies, he and others said.

Both the London and Berlin patients received stem cell transplants from donors carrying a genetic mutation that prevents expression of an HIV receptor, known as CCR5.

"Finding a way to eliminate the virus entirely is an urgent global priority, but is particularly difficult because the virus integrates into the white blood cells of its host," Gupta explained.

The study describes an anonymous male patient in Britain who was diagnosed with HIV infection in 2003 and has been on antiretroviral therapy since 2012.

Later that year, he was diagnosed with advanced Hodgkin's Lymphoma, a deadly cancer.

He underwent a so-called haematopoietic stem cell transplant in 2016 from a donor with two copies of a CCR5 gene variant, a combination carried by about one percent of the world population.

CCR5 is the most commonly used receptor by HIV-1.

People who have two mutated copies of CCR5 are resistant to most HIV-1 virus strains, frustrating the virus' attempts to enter host cells.

As with cancer, chemotherapy can be effective against HIV as it kills cells that are dividing.

But replacing immune cells with those that do not have the CCR5 receptor appears to be key in preventing HIV from rebounding after the treatment.

After the bone marrow transplant, the London patient remained on ARV for 16 months, at which point ARV treatment was stopped.

Regular testing has confirmed that the patient's viral load remained undetectable since then.

The Berlin patient -- treated for leukaemia -- was given two transplants, and underwent total body irradiation, while the British patient received just one transplant and less intensive chemotherapy.

The research team is presenting the findings at the annual Conference on Retroviruses and Opportunistic Infections (CROI) in Seattle, Washington.

"The second case strengthens the idea that a cure is feasible," Sharon R Lewin, director of the Peter Doherty Institute for Infection and Immunity and the University of Melbourne, told AFP.

"A bone-marrow transplantation as a cure is not viable. But we can try to tease out which part of the transplant might have made a difference here, and allowed this man to stop his anti-viral drugs."