China lists fentanyl as controlled substance in US gesture
World

China lists fentanyl as controlled substance in US gesture

BEIJING: China announced Monday it would add fentanyl analogues to its controlled substance list from May 1 following US pleas for Beijing to crack down on a drug fuelling a deadly opioid crisis. 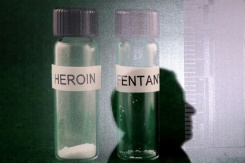 Fentanyl and its analogues are 50 times more powerful than heroin and blamed for a massive opioid epidemic in the United States.

China is suspected of being the main source of the narcotic, which is 50 times stronger than heroin and has caused record overdose deaths in the United States.

The issue has figured in trade talks between the United States and China, and Beijing promised to list the drug when presidents Donald Trump and Xi Jinping agreed to a tariffs truce in December.

The American concerns have "all been resolved", Liu Yuejin, deputy director of the National Anti-Drug Commission, said at a press conference on Monday.

"The US is concerned about all variants (of fentanyl), and it's all been resolved," said Liu.

American officials listening in the audience declined to comment.

In December, Trump said the move could be a "game changer", noting that Chinese courts can sentence drug traffickers to death.

"If China cracks down on this 'horror drug,' using the Death Penalty for distributors and pushers, the results will be incredible!" Trump tweeted at the time.

"What China did today was extremely important," said Stefan Thorsell, a police and customs liaison officer for the Swedish embassy in Beijing.