SYDNEY - Australia star Israel Folau's future and his participation in the Rugby World Cup were called into doubt Thursday as Wallabies sponsor Qantas joined a chorus of outrage at his latest homophobic rant. 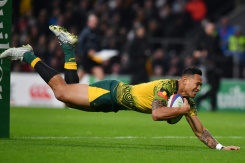 Australia fullback Israel Folau has been widely condemned for his latest comments about homosexuals.

The comments "clearly don't reflect the spirit of inclusion and diversity that we support", Qantas said.

But his extreme religious views have repeatedly rankled with supporters and the game's governing bodies.

He suggested they should "repent" as "only Jesus saves".

Rugby Australia called the post "unacceptable" and said it was looking at the matter further.

"It does not represent the values of the sport and is disrespectful to members of the rugby community."

Qantas said it was "pleased to see Rugby Australia's condemnation of the comments and will await the outcome of their review".

Folau recently signed a multi-season, multi-million dollar contract and could be fired if he is found in breach.

Some leading Australian commentators called for that to happen, including former Wallabies forward Peter FitzSimons.

"Israel Folau has to go, and will go," FitzSimons wrote in the Sydney Morning Herald. "Rugby must surely move quickly, or be made to look ridiculous."

New Zealand Prime Minister Jacinda Ardern said the comments were "damaging" from someone many consider to be a role model.

England's Joe Marler tweeted an image of two men kissing at Folau, accompanied by a heart.

Gay former Welsh star Gareth Thomas said that no one should "be influenced by his words".

"Be the better person and be YOU. Whoever YOU is..Hell doesn't await YOU. Happiness awaits YOU," he posted.