The 40m high Rain Vortex, the world's tallest indoor waterfall, is seen from inside Jewel Changi Airport in Singapore on Thursday. (Reuters photo)

SINGAPORE: A sprawling retail complex with the world's tallest indoor waterfall is what Singapore hopes will bring more travellers and visitors to the airport to shop and dine.

As global competition for travellers heats up in the aviation industry, Singapore's Changi Airport is set to open its S$1.7-billion (40-billion-baht or $1.3-billion) Jewel complex on April 17.

"[We want to] provide a wide range of amenities that allows the passenger to make the best use of their time as they transit through us," Jayson Goh, managing director, airport operations management at Changi, told a news conference. The airport also aims to attract domestic visitors and tourists to its shops, cinemas and food and beverage outlets.

Housed under a dome of glass and steel, the building spread over 135,700 sq ms is designed by Moshe Safdie, the architect known for the Marina Bay Sands resort, a boat-shaped landmark that has become synonymous with Singapore's skyline. (continued below) 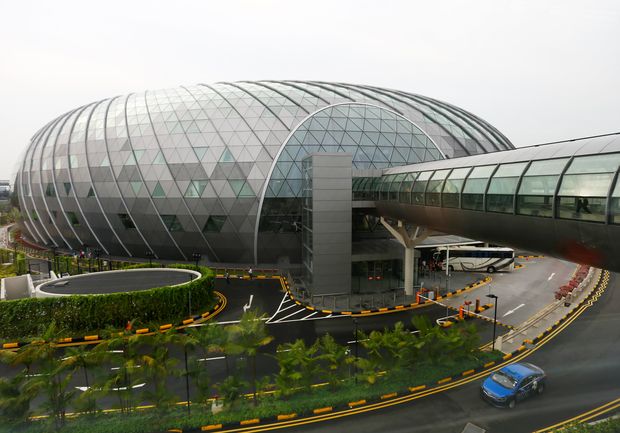 A general view shows the facade of Jewel, along with a walkway linking it to the various terminals in Changi airport in Singapore on Thursday. (Reuters photo)

Changi airport, recently voted in a Skytrax survey as the world's best for the seventh year running, reported a record 65.6 million passenger movements in 2018.

Sharon Ng, who teaches marketing at Nanyang Technological University's business school, said the concept was unique as other airports mainly target travellers and don't have the scale of retail that Jewel does.

Scores of visitors lined up on Thursday at the pre-opening for a glimpse of the Rain Vortex, a 40-metre tall waterfall that pours rainwater from the centre of the glass and steel dome.

A difference in culture and working styles is causing a rift between Central Group and Chinese internet giant JD.com regarding their e-marketplace joint venture JD Central.

Rare tornado kills one in Netherlands