SAINT PETERSBURG - When Anastasia, a Russian transgender woman, took her employer to court for firing her after a gender reassignment operation, she did not expect to win. 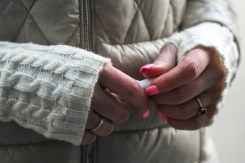 "I knew the chances were slim, I understand what country I live in," the 43-year-old told AFP in her native Saint Petersburg.

But in the first known case of its kind in Russia, a court in the former imperial capital last week ruled she had been unfairly discriminated against and ordered compensation.

Local LGBT rights groups hailed the decision as a small victory in a country where gay and transgender people are often persecuted.

A so-called "gay propaganda" law officially forbids the promotion of "non-traditional sexual relations" to minors but in effect stops most LGBT campaigning.

"It is the first time that this type of case is discussed (in public)," Anastasia's lawyer Max Olenichev told AFP.

"This case has made transgender people visible," Olenichev said.

"That is very important."

For a decade, Anastasia worked for a private printing press in Russia's second city.

In 2017, she underwent a gender reassignment operation, legally changing her name and gender in her documents.

After this, her employer suggested she resign and -- when she refused -- fired her.

The company said she could not continue her job in printing, one of 456 professions from which women are officially banned in Russia.

Under Russian law, women cannot work as welders, long-distance truckers, sailors, blacksmiths, aircraft mechanics or hundreds of other roles, including those in printing.

But she said her reassignment was the real reason behind her firing.

"They did not want a person like me working for them," she said.

Lawyer Olenichev argued in court that Anastasia had done her job for ten years without any problems.

To their surprise, the Frunzensky court in Saint Petersburg ruled the company's decision "illegal" and demanded it pay Anastasia 1.8 million rubles (around $28,000) in compensation.

"This is not surprising, given that all the media says it is not normal," she said.

Anastasia has been with her partner for twenty years, and also has a teenage daughter. She said her family "accepts and loves" her "no matter what my status is".

But she considers herself lucky, saying that is not the case for many transgender people in Russia.

Mark Kandolsky, of the "Our Coming Out" gay rights group in Saint Petersburg, said many transgender people in Russia are forced to cut ties with their families.

"Due to a lack of information, Russian society is hostile to transgender people," he said.

Authorities have banned gay pride parades and since 2017 gay men have spoken of persecution in the Russian republic of Chechnya.

Despite having good relations with her family, Anastasia does not want to reveal her real identity and asks for her face not to be shown on camera.

"After all this, I just want to live quietly," she said.