RIYADH: A Saudi court on Wednesday postponed a hearing in the trial of 11 women activists which has drawn international censure, officials said, just days after campaigners reported a new crackdown on their supporters. 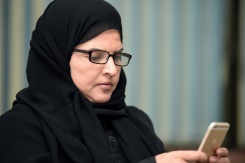 Activist Aziza al-Yousef is among 11 women's rights campaigners who are due back in a Saudi court on charges that include contact with foreign media, diplomats and human rights groups

The activists, among them Loujain al-Hathloul who has accused her interrogators of sexual abuse and torture during nearly a year in custody, face charges that include contact with foreign media, diplomats and human rights groups.

A panel of three judges at the Riyadh criminal court had been expected to examine their response to the charges, which was submitted by the women earlier this month.

But policemen at the courthouse turned away Western media and diplomats -- already barred from attending previous sessions of the high-profile trial -- saying the hearing had been postponed.

No explanation was given and it remains unclear when the trial will resume.

"We learn that the #WomensRightsDefenders trial did not take place today, for reasons that are not known,"ALQST, a London-based human rights group focused on Saudi Arabia, said on Twitter.

Riyadh has faced pressure from Western governments to release the women, most of whom were detained last summer in a wide-ranging crackdown against activists just before the historic lifting of a decades-long ban on female motorists.

In an apparent crackdown on the women's supporters earlier this month, Saudi authorities arrested at least nine writers and academics, including two US-Saudi dual nationals.

Aziza's son, Salah al-Haidar, is among the two Americans detained.

The families of those newly arrested are "very worried" as they have so far not received any information about their whereabouts or conditions, a legal source told AFP.

Last Wednesday, US Secretary of State Mike Pompeo said he had pressed Saudi Arabia –- a close ally of President Donald Trump's administration -- to release the US citizens.

The Saudi government has so far not publicly commented on the latest crackdown, the first since journalist Jamal Khashoggi's murder inside the Saudi consulate in Istanbul last October, which sparked unprecedented global scrutiny of the kingdom's human rights record.

"The Saudi authorities must end this misery for the women activists and their families -- they must immediately release them and drop the ridiculous charges against them," said Amnesty International's Middle East campaigns director Samah Hadid.

"The world is watching the trial and will keep up the pressure until the women are released," Hadid told AFP.

Several of the defendants are considering asking the judges to call the foreign contacts named in their chargesheets -- including journalists and diplomats -- to testify in the trial, a source privy to information about the hearings told AFP.

Loujain's siblings, based overseas, have said they are being pressured by people close to the Saudi state to stay silent over her treatment in detention.

People close to the Saudi establishment have warned that public criticism by family members could prolong their detention.

At one emotionally charged court hearing, some women broke down as they accused interrogators of subjecting them to electric shocks, flogging and groping in detention, two people with access to the trial told AFP.