Despite denials from Beijing and Phnom Penh, US defence strategists see possibility of military use

SIHANOUKVILLE, Cambodia: Along pristine Cambodian beaches, past parades of elephants in the country’s largest national park, sits an area half the size of Singapore that is raising alarm bells among military strategists in the United States and beyond.

Dara Sakor, a US$3.8-billion China-backed investment zone encompassing 20% of Cambodia’s coastline just 100 kilometres south of Trat province in Thailand, is unlike any other in the country. Controlled by a Chinese company with a 99-year lease, it features phased plans for an international airport, a deep-water seaport and industrial park along with a luxury resort complete with power stations, water treatment plants and medical facilities.

The size and scope of the plans for Dara Sakor have fanned US concerns that the resort could be part of a larger Chinese plan to base military assets in Cambodia, according to an official familiar with the situation.

A naval presence there would further expand China’s strategic footprint into Southeast Asia, consolidating its hold over disputed territory in the South China Sea and waterways that carry an estimated $5 trillion worth of trade each year.

It’s not the first time China’s presence in Cambodia has raised alarms with the Trump administration. Vice President Mike Pence last year wrote a letter to Prime Minister Hun Sen expressing fears that Cambodia might be planning to host Chinese equipment at another nearby location, Ream Naval Base, which officials in Phnom Penh have repeatedly denied.

More broadly, the US suspects that President Xi Jinping’s signature Belt and Road Initiative to build ports and other strategic infrastructure in places such as Sri Lanka, Pakistan and Myanmar will pave the way for China to set up more military bases abroad after establishing its first one in Djibouti two years ago.

Cambodia, which obtains three-quarters of its foreign investment from China, has increasingly been Beijing’s most reliable partner in Southeast Asia.

“If you have a naval base in Cambodia it means the Chinese navy has a more favourable operational environment in the waters surrounding Southeast Asia,” said Charles Edel, a former US State Department official who is now a senior fellow at the United States Studies Center at the University of Sydney.

“You have all of a sudden mainland Southeast Asia potentially sitting behind a defensive Chinese military perimeter. This is by far the biggest implication and one that would likely have political effects.”

Since taking office in 2017, President Donald Trump has publicly questioned the value of longstanding US alliances in Asia and elsewhere in the world. That has helped provide an opening for China and Russia to further strengthen strategic ties with friendly countries.

Hun Sen has called reports of a Chinese military base “fake and twisting the truth”. He wrote back to Pence saying his country rejects any foreign military presence as well as any “rivalry that could potentially plunge Cambodia into a proxy war again”, according to a copy seen by Bloomberg.

That did little to reassure the US, however. Last month, Department of Defence official Joseph Felter wrote to Defence Minister Tea Banh asking why Cambodia rejected an offer of US funds to repair facilities in Ream Naval Base after initially submitting a request in January. Felter said the sudden reversal fuelled suspicions that Cambodia would host Chinese military assets at the base, according to a letter seen by Bloomberg.

“We are concerned that any steps by the Cambodian government to invite a foreign military presence in Cambodia would threaten the coherence and centrality of the Association of Southeast Asian Nations,” Emily Zeeberg, a spokeswoman for the US Embassy in Phnom Penh, said by email.

Cambodia’s government insists it has nothing to hide. Tea Banh, who attended the opening ceremony for Dara Sakor in March, told Radio Free Asia this month that Cambodia no longer needed the US funds because the facilities designated for repair would be moved to an unspecified new location.

Phay Siphan, Cambodia’s main government spokesman, likened US worries about a Chinese military base to its search for weapons of mass destruction in Iraq. Cambodia has no intention to host Chinese naval assets at Dara Sakor or anywhere else, he said.

“Dara Sakor is civilian ⁠— there is no base at all,” Phay Siphan said. “It could be converted, yes, but you could convert anything.”

Covering 360 square kilometres of the heavily forested Botum Sakor National Park, Dara Sakor was conceived as a tourism hub in 2008 when the concession was awarded to Tianjin Union Development Group based in the northern Chinese port city. The company, which attracted senior Communist Party leaders to endorse the project, wants to create what amounts to a new Cambodian metropolis.

Brochures on its website show ambitious plans: an airport that receives half of Cambodia’s visitors, docking facilities for full-size cruise ships and high-speed rail connections to the capital Phnom Penh and Siem Reap — home to the famed Angkor temples and currently Cambodia’s top tourist draw. Chinese tourists last year made up about a third of the country’s 6.2 million visitors, which contributed about 13% of GDP.

Tianjin Union didn’t officially provide anyone who could answer questions on the record after repeated phone calls and emails over several weeks. A woman who only gave her last name as Zhong said by phone: “We noticed that the Cambodian government has responded to this issue, and dismissed the speculation of building a military base there. We have nothing further to add.”

A visit to Dara Sakor this month showed nothing out of the ordinary. One employee at the resort said a new airport was necessary because the closest one was currently about a 3.5-hour drive on newly paved roads from Sihanoukville, a beach town where a Chinese investment boom has stirred local resentment in recent years.

At a checkpoint in front of the construction site for the new airport, which is set to become operational next year, a single sleepy guard waved through vehicles to a vast expanse of dirt. Visitors could drive all around the area, including on the newly completed tarmac. Construction hadn’t yet begun on a terminal or other buildings, and only a handful of people milled about.

A guard manning another checkpoint on a 67km dirt road connecting the resort with a deep-water port initially demanded a $5 bribe before relenting. The bumpy stretch showed few signs of life other than streams of elephant dung.

Inside the resort, which opened in 2014, tourists from Cambodia and China ate, swam and lounged about with their families. The staff invited Bloomberg reporters to explore the spacious grounds, which were accessible through an entrance featuring tall roman pillars beneath a large pediment. Nowhere appeared off limits.

The resort had a well-manicured golf course and a white sand beach that curved beneath a tree-lined hill. But it was already showing some wear and tear: man-made ponds were filled with scum, and weeds grew through cracked tiles along the walkways.

“There is no Chinese army here, not that I can see,” said a young driver at the resort who goes by Bob. He laughed at the idea that the resort would one day play host to the Chinese military.

At a security conference in Singapore last month, Chinese Defence Minister Wei Fenghe flatly denied the country is building a naval base in Cambodia. “There is no such thing as for China to establish its military presence in Cambodia,” he said in response to a question.

But military strategists see a few red flags. The new airport will have a capacity of 10 million passengers a year, double the capacity in Phnom Penh and more than 40 times the number of visitors who arrived in 2017 at the airport in Sihanoukville, which has loads of hotels and casinos. Koh Kong received only around 150,000 international visitors last year.

“Unless you have the kind of tourism you need already there, then you don’t build an airport ⁠— especially when there is already an airport nearby,” said retired Indian Army colonel Vinayak Bhat, a former satellite imagery analyst. The deep-water port also doesn’t make sense for tourism, he said, adding: “It can become a naval base overnight.”

Bhat said Indian military planners were also worried about China’s interest in financing the Kra Canal through Thailand, which would allow it to bypass the Malacca Strait and project power into the Indian Ocean.

While Prime Minister Prayut Chan-o-cha ordered an examination of feasibility proposals for the canal in November, little has been done since then. Earlier studies - the Kra Canal has been debated for decades — suggest it could take just nine years to build if given the green light.

Either way, suspicions are likely to persist, in part due to the lack of transparency in Cambodia. Exiled opposition leader Sam Rainsy called for an international investigation into China’s activities, saying they could possibly violate the 1991 Paris Peace Agreements that ended a protracted civil war.

A foreign military base in Cambodia would be “potentially destabilising for the region,” Sam Rainsy said. “This risk clearly needs to be taken seriously and independently assessed.” 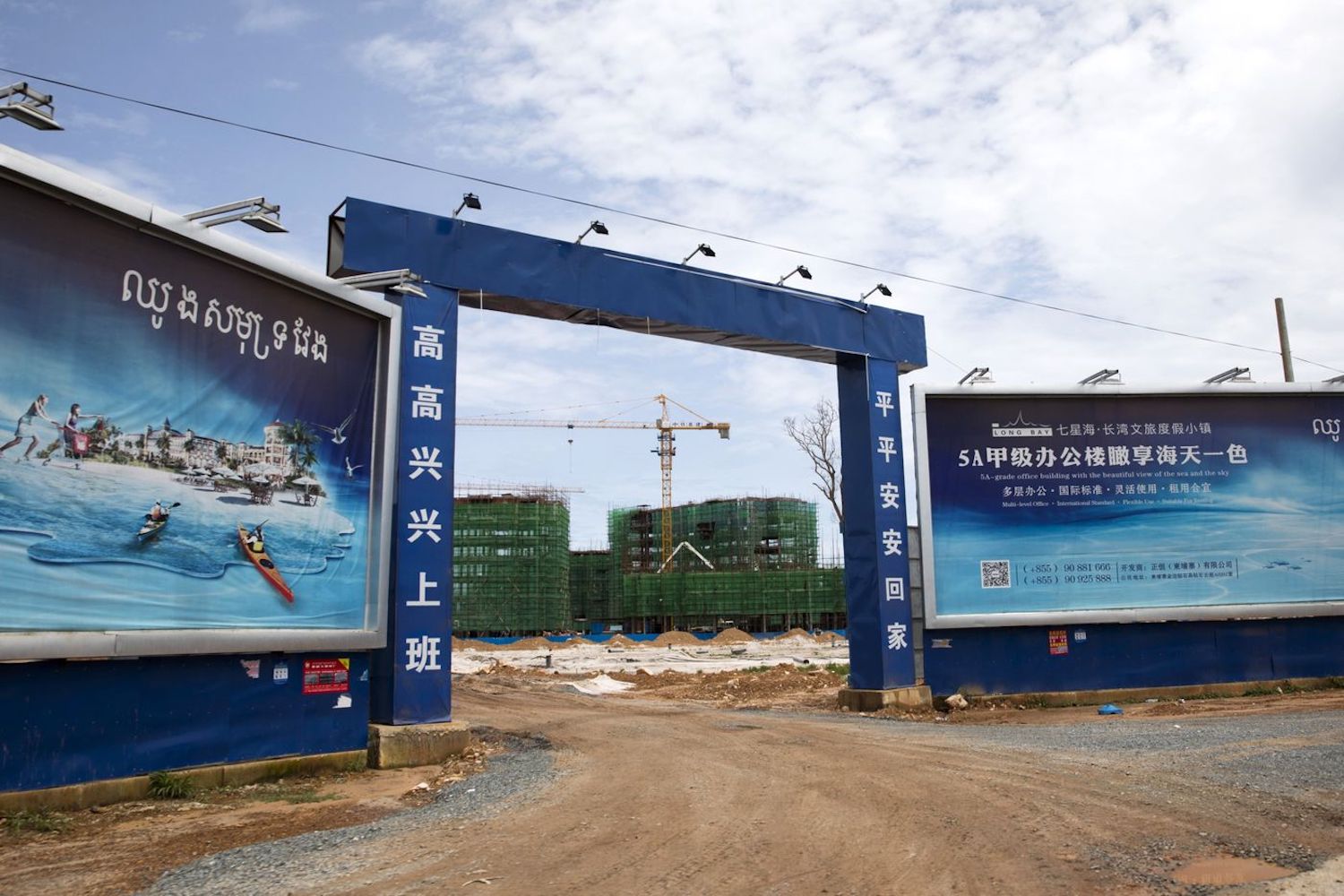