A man gestures during a demonstration against the Hong Kong administration in the To Kwa Wan neighbourhood on Saturday. (Reuters Photo)

HONG KONG: Pro-democracy protesters marched on one side of Hong Kong’s famous harbour on Saturday to demand the government heed their demands. Across the water, a pro-government rally called for an end to the often violent protests.

The duelling demonstrations highlighted the political divide in the semiautonomous Chinese territory, which for 10 weeks has been rocked by protests that show no signs of relenting.

“The government right now doesn’t listen to the people, and the police are too violent,” said Bobby Tse, a 76-year-old retiree who watched the pro-democracy march from a bridge. “It didn’t used to be like this. We didn’t have to protest every week. But now even though we have protests every week, the government still gives no response.”

At the pro-government rally, speakers on a stage said they love both Hong Kong and China and asked the protesters why they are afraid of China. Leo Chen, a 47-year-old driver, said he came out because he wants peace in his city of 7.4 million people.

“Before, everyone in Hong Kong helped each other, it was very harmonious,” he said. “Now to see it become like this, I’m not happy, so I’ve come out to show a little strength.”

China urged Hong Kong to punish demonstrators who break the law as thousands of teachers added their voices to the movement and marched in the rain to Chief Executive Carrie Lam’s residence Saturday.

Protesters who have broken laws must be punished accordingly, You Wenze, a spokesman for China’s National People’s Congress Foreign Affairs Committee, said in an interview with state TV on Saturday.

Some protesters have challenged the one-China principle, and they must be punished accordingly, You said.

“There’s no majesty in laws if breaking laws can go unpunished,” said You, whose committee is a panel of China’s legislature that crafted the Basic Law, the mini constitution of Hong Kong.

The teachers who marched to Lam’s official residence on Saturday said they turned out to show support for the protesters.

Carrying signs that read “Protect the next generation” and umbrellas to ward off intermittent downpours, the teachers tied white ribbons to a metal fence near Government House. They said the government should answer the protesters’ demands and stop using what they called police violence to disperse demonstrators who have taken over streets and besieged and defaced government buildings.

“We want to protect our students, our youngsters, so teachers are willing to come out and speak for the youngsters, and also, to stand by them so they are not alone,” said Fung Wai-wah, president of the Hong Kong Professional Teachers’ Union, which organised the march.

The movement’s demands include Lam’s resignation, democratic elections and an independent investigation into police use of force. A rally in Victoria Park has been called for Sunday by a pro-democracy group that has organised three massive marches through central Hong Kong since June.

“Even though we’re all scared of getting arrested, we have to keep going,” said Minnie Lee, a 31-year-old logistics worker who joined the pro-democracy march. “What we are fighting for is democracy and our rights. We’re not doing anything wrong. If we stop now, things will only get worse.”

One Saturday night, riot police were deployed to chase down a group of pro-democracy protesters they say were assembling illegally after the end of a sanctioned protest march.

The protesters had gathered outside a police station, shining laser pointers and throwing eggs at officers guarding the entrance. Riot police formed a line on a nearby street, thumping their batons on their shields as they started marching.

But by that time, most protesters had already melted away into densely populated Mong Kok district, leaving officers to face the anger of local residents, who yelled for them to go home and accused them of being members of crime gangs.

The protesters had taken part in an approved protest march earlier Saturday, but when it reached the finish they continued, cheered on by supporters honking their horns and raising their fists.

Members of China’s paramilitary People’s Armed Police force have been training this week across the border in Shenzhen, fuelling speculation that they could be sent in to suppress the protests. Officers didn’t appear to hold major drills on Saturday, but could be seen doing jumping jacks and stretching inside a sports stadium. Dozens of army-green armored carriers and trucks were parked inside and outside the facility.

The Hong Kong police, however, have said they are capable of handling the protests.

“I can tell you we’re confident the police have the capability to maintain law and order,” Yeung Man-pun, commander of the Kowloon City district, said Friday when asked about the possibility of a deployment of mainland security forces.

Outside of Hong Kong, demonstrations were held in support of both the pro-democracy movement and China.

In Australia, at least 200 protesters descended on Sydney Town Hall, chanting “Long live China” and singing the Chinese national anthem, while a protest in support of the pro-democracy movement continued in Melbourne.

The Melbourne rally had turned ugly on Friday night, with police moving in to separate some 100 pro-China protesters from those sympathetic to Hong Kong. Saturday’s protest in the southern city was peaceful.

In Taiwan, people held a flash mob demonstration in Taipei in support of the Hong Kong protests.

Police in Hong Kong have made some 750 arrests since the unrest began in June, and have charged some protesters with rioting which can attract a 10-year jail term as punishment.

In some cases, the arrests have been accompanied by extensive property searches and seizure of phones and computers, police sources say.

“They are doing these hit and run lately,” one senior police officer told media earlier this week. “Arrests should be a natural consequence. If we can arrest more and more because they are undertaking illegal acts, so be it.” 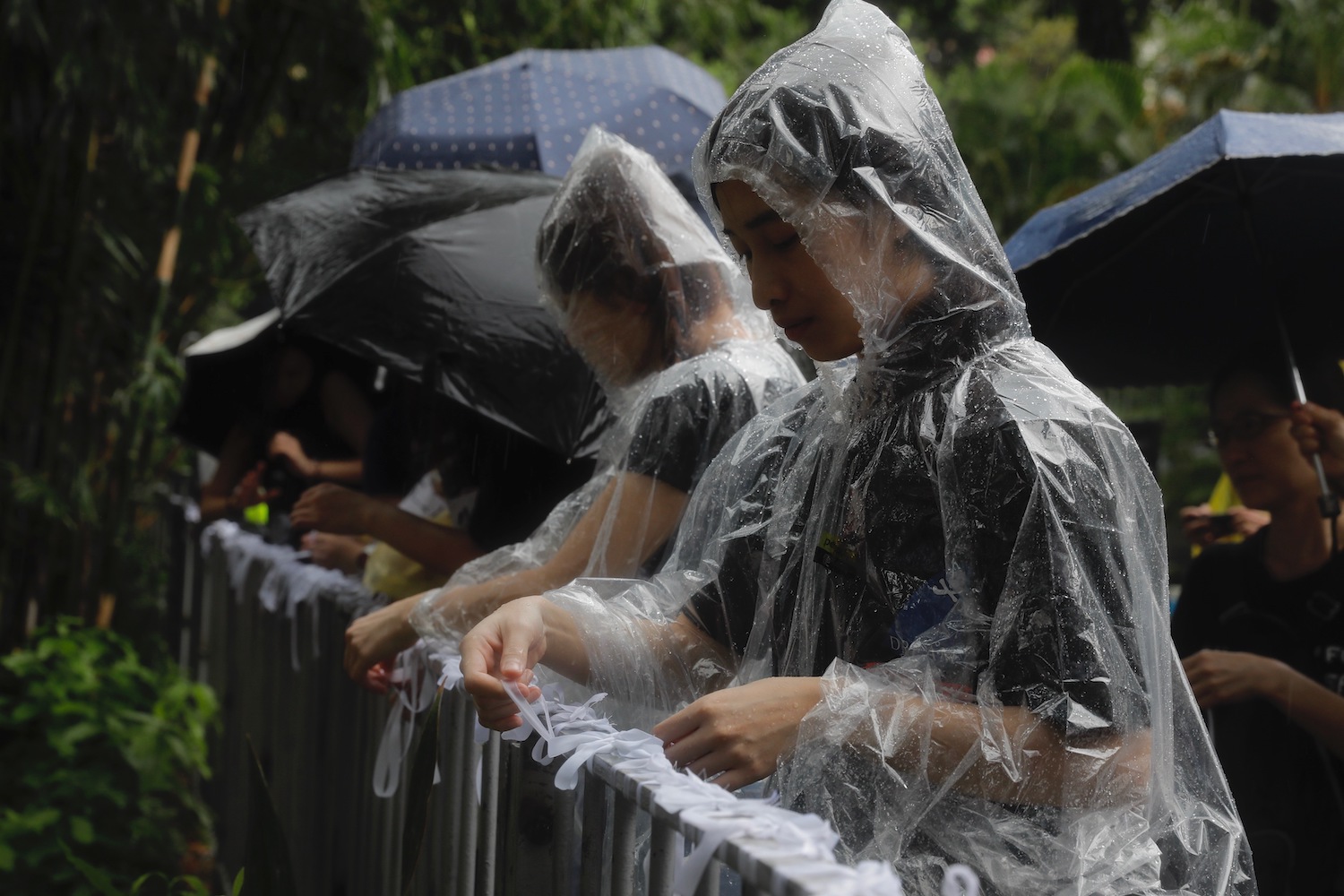