HONG KONG: Seething with anger, the black-clad students hurled gasoline bombs, threw bricks and even aimed flaming arrows at riot police, who answered with tear-gas volleys and rubber bullets that hurtled into Hong Kong’s university grounds for the first time.

And with those battles Monday and Tuesday at the territory’s largest universities, another unspoken rule in the antigovernment protests that have been convulsing Hong Kong for six months was shattered: the sanctity of educational campuses from police.

The clashes turned what had been sanctuaries for the students at the core of the movement into scenes that evoked mediaeval citadels under siege.

They opened a new chapter that threatens to further disrupt the Asian financial capital, which has struggled for normalcy despite the increasingly violent protests against the Chinese Communist authorities in Beijing who have the last word over Hong Kong’s future.

Hong Kong has fallen into recession as tourists have fled and as its busy shopping areas become backdrops for street battles between demonstrators and police officers. The world is asking hard questions about what could befall Hong Kong as Beijing further tightens control over a city that is supposed to operate under its own laws.

The most dramatic student-versus-police clash unfolded late Tuesday night at a barricaded bridge leading to the campus of the Chinese University of Hong Kong. For hours, police officers fired hundreds of rounds of tear gas and rubber bullets and students hurled Molotov cocktails and bricks, and practiced firing bows with flaming arrows. More than 100 injured students were brought to a makeshift first-aid clinic in a gym.

By targeting campuses, police have breached the last refuge of the protesters, a move that brings the violence to the heart of the universities and invokes the pivotal and fraught role of student activism in the global history of democracy movements.

“One thing that people have realized is that the protests, the movement, the conflict, is unavoidable,” Gabriel Fung, a 19-year-old second-year student at the University of Hong Kong, said. “It’s going to reach you wherever you are at some point.” (continues) 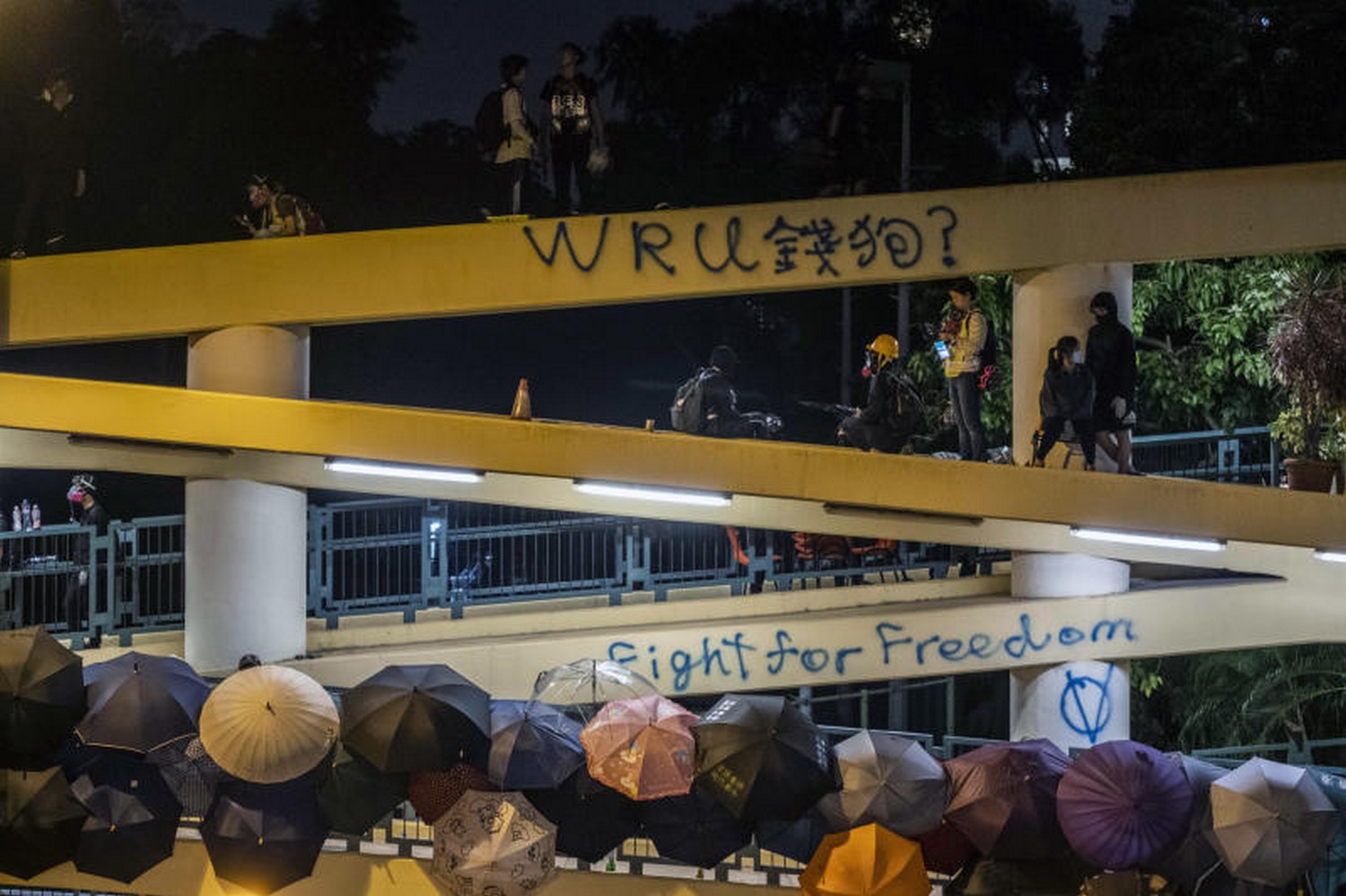 It is at these universities where young leaders and other students have been organizing revolts against the Chinese Communist Party and spreading the pro-democracy ideas that undergird the protests. And here, too, that the students discuss the wealth inequality and cultural homogenization that have led to visions of a bleak future among many of their generation.

In Hong Kong, university administrators and professors now find themselves in a difficult position, trying to preach tolerance and walk a tightrope of furious demands from students, police and government officials. Two schools Wednesday ended their semesters weeks early.

“Not a single place in Hong Kong is exempt from the rule of law, and that includes universities,” John Lee, the secretary for security, said Wednesday at a news conference. “Universities are not supposed to be the breeding ground of violence.”

Student activists in Hong Kong have lived by an exhausting weekly rhythm since the movement began in early June: protest on weekends, show up Mondays for class, study for exams and apply for internships or jobs in between it all. Many argue with parents who disagree with their politics or tactics. Hundreds have been arrested in recent months and quickly released by police, as required by law.

It was the death of a university student this month that set off the current round of protests and violence. Chow Tsz-lok, a student at the Hong Kong University of Science and Technology, sustained a fatal injury after falling from a parking garage near a police action Nov. 4. Thousands attended candlelit memorial rallies last weekend, and his photograph is on posters and makeshift shrines all over campuses because he is now a martyr for other students.

Roiled by the latest unrest, universities canceled classes from Monday to Friday. That meant protesters have been able to hit the streets at dawn on weekdays after sleeping a few hours. On campus, activists have sprayed fresh graffiti, including phrases cursing administrators.

The fraught situation led police officers Wednesday to organize an evacuation of dozens of mainland Chinese students across the border to Shenzhen, where hotels offered them free rooms. (continues) 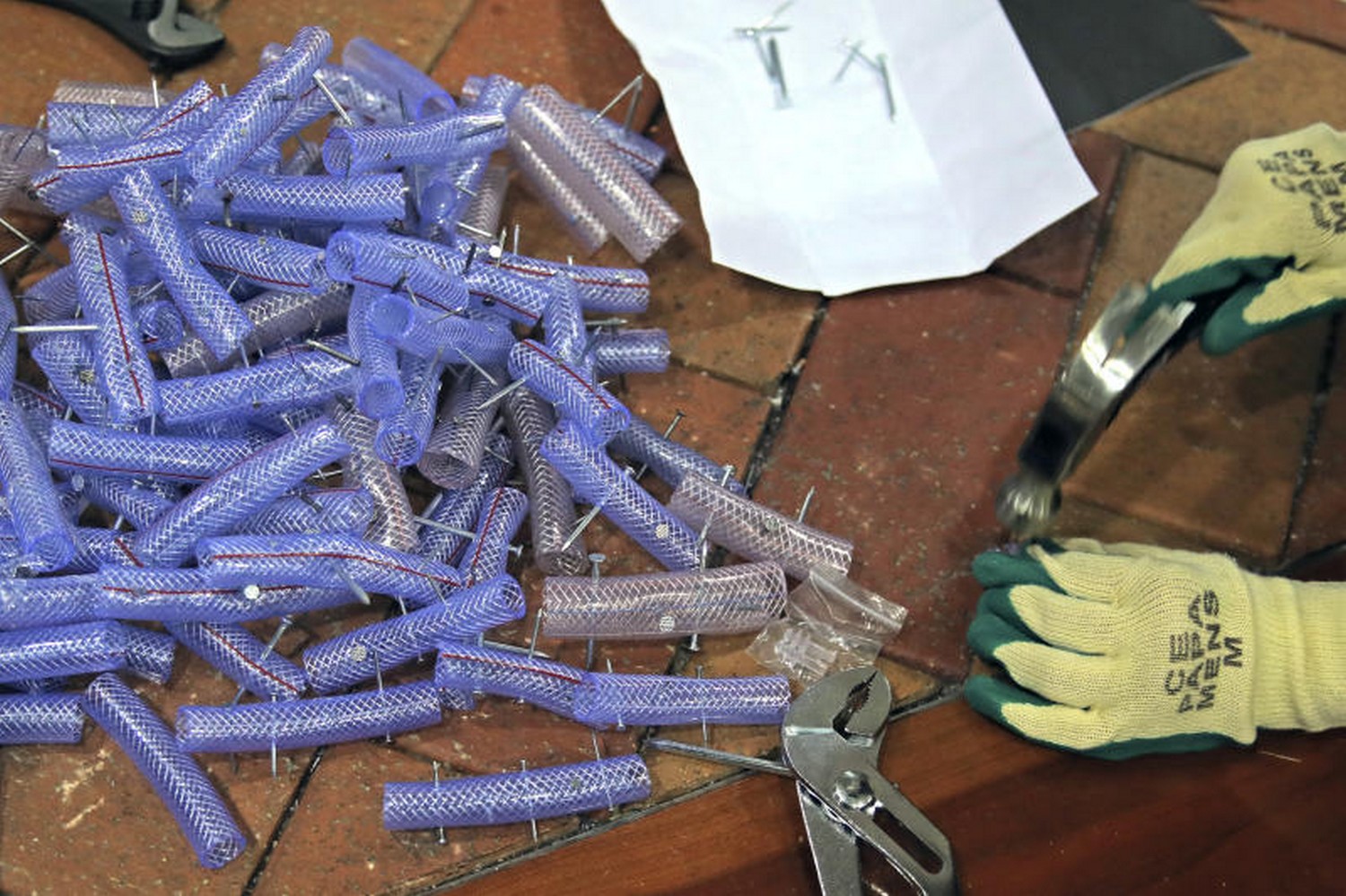 A pro-democracy protester makes nail roadspikes inside the campus of the University of Hong Kong, early on Thursday. University students from mainland China and Taiwan are fleeing Hong Kong, while those from three Scandinavian countries have been moved or urged to leave as college campuses become the latest battleground in the city's 5-month-long anti-government unrest. (Photo: Kin Cheung/AP)

One graduate student at the University of Hong Kong said he and others from the mainland still felt safer on campuses than on the streets. He said many students do not openly express pro-Beijing opinions and sometimes avoid speaking loudly in Mandarin, the dominant language back home. (He spoke on the condition of anonymity because of the tensions.)

Some university departments have delayed recruitment drives of mainland and foreign students to come up with new strategies; a drop-off in enrollment by mainland graduate students, who often pay full tuition, would lead to budget problems.

Hong Kong’s public universities, which have more than 86,000 undergraduate and nearly 11,000 graduate students, each have distinct characters. That means the students have occupied different roles in the movement, and the protests have played out in different ways on each campus.

The Chinese University of Hong Kong, with 20,000 students, is considered the most radical campus. Most of its students are Cantonese-speaking locals, some of whom live nearby with their parents in dense apartment blocks. And the campus is high in the hills of Sha Tin, isolated from the city center, which is an hour’s ride away by subway.

On Monday, police arrested five students on the campus’s edge, administrators said. The next morning, police, still at the border, confronted front line students, and clashes took place over 20 hours. Rocky S. Tuan, the president, who has been known for trying to engage with students during the movement, showed up during a lull in the evening to urge the students to be calm.

“You all should know that I really want to help you. I will do everything within my capability,” he said. “It is the university’s responsibility to maintain peace on campus, not the police.”

But as Tuan began walking away, police fired tear gas. Tuan himself was enveloped in the gas. Students set fires to keep the police from advancing, and scores formed human chains to pass along bricks, umbrellas and bottled water to the front lines. Students sitting on one patch of road made gasoline bombs as if on an assembly line.

“It was a savage move and a type of police violence when they tried to encroach on the university,” said Timothy Chow, 23, an engineering student who graduated in June. “This is why we have to protect our Chinese University of Hong Kong.

“When I saw our compatriots and Chinese University staff being hurt by the police, I felt particularly furious and wanted to come back to defend our university,” he added.

At the University of Hong Kong this week, front-line students also set up barricades and, against the advice of professors, threw paving bricks off balconies, even though it is considered the most established of the territory’s schools.

Founded in 1911, it is the territory’s oldest university. Many of its students are foreigners or Hong Kong residents who attended international schools. English is the main language, and the university aims to open a mainland China campus. Among its alumni are many police commanders and Carrie Lam, the territory’s chief executive who is reviled by protesters.

On Monday, the students were on edge in part because police had taken a student from a dormitory area early that morning.

Two liberal law professors, Hualing Fu and Johannes Chan, urged a group of front-line protesters in masks not to resort to violence and to understand that the struggle for democracy was a lifetime commitment, according to video footage. But one masked woman shouted they had no choice, and asked: “How many people are we going to sacrifice?”

“We are better; we are different,” Fu said.

On Monday and Tuesday mornings, police officers arrived at campus entrances to try to clear the barricades. They fired tear gas but retreated.

Students have called on the president, Xiang Zhang, to forcefully condemn police, but he has refrained from doing so, and, unlike Tuan, rarely holds open forums. On occasion, professors have shown up at the front lines to speak to students, as William Hayward, dean of social sciences, did Tuesday.

“Obviously, as it goes on and as it gets more polarized, this becomes increasingly a challenge,” Hayward later said of student engagement. “Some of them do really open up, but at the same time, you know, of course they’re trying to figure out — is he on our side or is he trying to silence us?”

As night fell on Tuesday, students traded shifts at the barricades, walking past a famous 8-metre statue of orange corpses, “The Pillar of Shame,” that memorializes the 1989 massacre of pro-democracy students and workers around Tiananmen Square in Beijing by the Chinese government.

Pattaya City plans to turn Koh Lan, a popular island just 8 kilometres away from the shore of Pattaya, into "Neo Koh Lan", in an attempt to accommodate economic growth as Pattaya is being upgraded as a tourism and investment hub under the Eastern Economic Corridor (EEC) scheme.

A majority of people think it is now time for a cabinet reshuffle, reasoning that the government has not been able to effectively solve the economic problems although they are satisfied with its handling of the Covid-19 situation, according an opinion survey by the Suan Dusit Rajabhat University, or Suan Dusit Poll.

NEW YORK: Several of opera's biggest stars beamed in from around the world on Saturday to announce the Metropolitan Opera's latest virtual initiative amid the coronavirus outbreak.