A head of a sacrificed buffalo lies on the ground a day after the sacrificial ceremony of the "Gadhimai Mela" festival held at Bariyarpur in Nepal Dec 4, 2019. (Reuters file photo)

The senseless killing of animals is something that should be condemned not celebrated. But a notoriously bloody spectacle that went ahead last week in Nepal reminds us how difficult it can be to overturn centuries of "tradition".

In 2009, around 250,000 animals -- mainly water buffaloes, cows, goats, rats, chickens, pigs and pigeons -- were slaughtered at the Gadhimai Festival, which is staged every five years at the Temple of Bariyarpu, 150 kilometres south of Kathmandu near the border with India. An alarmed world took notice, and the number came down to 200,000 in 2014.

Temple authorities in 2015 announced a ban on future events, and the following year the Supreme Court of Nepal directed the government to discourage the killing.

But the rulings of the temple and the court have been ignored, and the efforts of animal rights activists have come to naught. The world's largest animal sacrifice was back on the calendar last week.

For 250 years, millions of devotees have been travelling to the temple every five years in the belief that animal sacrifices to the Hindu goddess of power, Gadhimai, will lead to their wishes being fulfilled. Now, I am all for culture, but activities that involve killing for nothing more than human vanity and greed do not sit well with me.

"I had four sisters. Eight years ago, I made a wish for a brother and the goddess blessed us with him," Priyanka Yadav of Janakpur told BBC Nepali.

"I believe in the goddess. My mother had asked her for the good health of my son," devotee Rajesh Kumar Das, 30, told AFP while holding a goat in his hand. 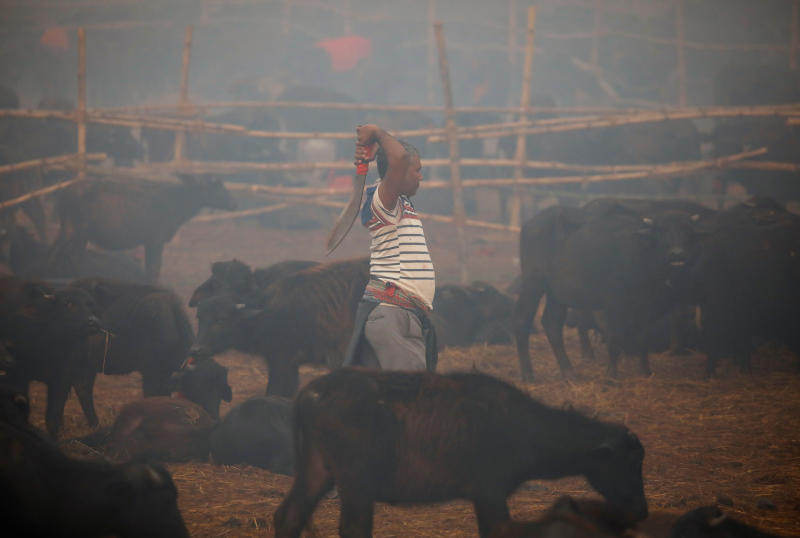 A butcher holding his blade walks inside an enclosed compound during the sacrificial ceremony of the "Gadhimai Mela" festival held at Bariyarpur in Nepal Dec 3, 2019. (Reuters file photo)

I don't want to sound disrespectful, but someone should teach Ms Yadav how the human reproductive system works, and maybe tell Mr Das that killing an animal won't give good health to his son, unless perhaps he cooks and feeds the animal to him.

The festival traces its origins to the tale of a prisoner who claimed that Gadhimai appeared to him in a dream and told him to offer blood and establish a temple to her. When he woke up, he found that his shackles had fallen off. He fled his cell and set about building the temple as a place of sacrifice.

According to the Himalayan Times, around 8 million devotees from 18 countries, the vast majority from India and Nepal, were expected at this year's bloodbath. They brought with them thousands of water buffaloes, goats and fowl for the sacrifice.

Traditionally, the animals are not given any food or water for days prior to the ritual since their heads are going to be chopped off anyway. It was left to animal rights activists to feed and care for the suffering animals in their final hours.

Journalists were barred from the site in an attempt by event managers to keep a low profile. But of course the internet is awash in bloody videos. It was a clip of a buffalo being beheaded in 2014 that led me to write this column because I want this deplorable act to stop.

I have been to a slaughterhouse, and I have also participated in the sacrifice of a cow in northeastern Thailand where my mother's family came from. But it was fed to everyone in the village. These animals are not starved beforehand or forced to witness the beheading of others of their species next to them. Vegetarians will disapprove, but at least these animals are not being killed out of some unfounded superstition.

There is no doubt that culture and beliefs should be respected but rituals and outdated practices that involve the killing of innocent creatures should be amended.

If Thai people can use Red Fanta instead of blood and animal figurines instead sacrificing real animals for spirit houses, there should be no reason why devotees of Gadhimai cannot use coconuts and other plant-based offerings instead.

Meanwhile, the festival organisers, sponsors and donors who were giving away free food and water to millions of devotees might also want to think about the millions other people that are going hungry every day in India and Nepal.

According to the Global Hunger Index, India ranked 102nd out of 117 qualifying countries in 2019. With a score of 30.3, India is suffering from a level of hunger that is considered "serious", so maybe they could consider feeding their countrymen instead of sponsoring this pointless bloodshed.