After bearing the brunt of jihadist dynamite and looting by thieves, the archaeological treasures of Afghanistan’s Bamiyan province are facing a new and possibly more daunting threat from climate change.

BAMIYAN, Afghanistan: After bearing the brunt of jihadist dynamite and looting by thieves, the archaeological treasures of Bamiyan province are facing a new and possibly more daunting threat - climate change.

Nestled in the heart of the Hindu Kush mountains, the Bamiyan valley's picturesque cliffs -- where centuries-old Buddha statues were destroyed by the Taliban in 2001 -- still contain a network of caves housing temples, monasteries, and Buddhist paintings.

The valley is also home to the silk-road era Shahr-e Gholghola fortress and the Shar-e Zohak citadel to the east.

Experts say that a pattern of dry spells followed by heavy rain, and larger than usual spring snowmelts is putting this historic art and architecture at risk of destruction.

Afghan officials warned in a 2016 United Nations report that the structures "may collapse and suffer from severe erosion"due to conditions directly linked to climate change.

"The erosion processes are much faster, the rains more devastating and the wind erosion stronger, which has an extremely harsh impact on the sites," Philippe Marquis, the director of the French Archaeological Delegation in Afghanistan, told AFP.

Marquis -- who has explored and worked in the region for decades -- explains that Afghanistan "is very fragile geologically, especially as vegetation cover has greatly diminished" due to deforestation.

French imaging company Iconem concurred, saying Shar-e Zohak is "very fragile" due to erosion that has increased considerably over the last 30 years. 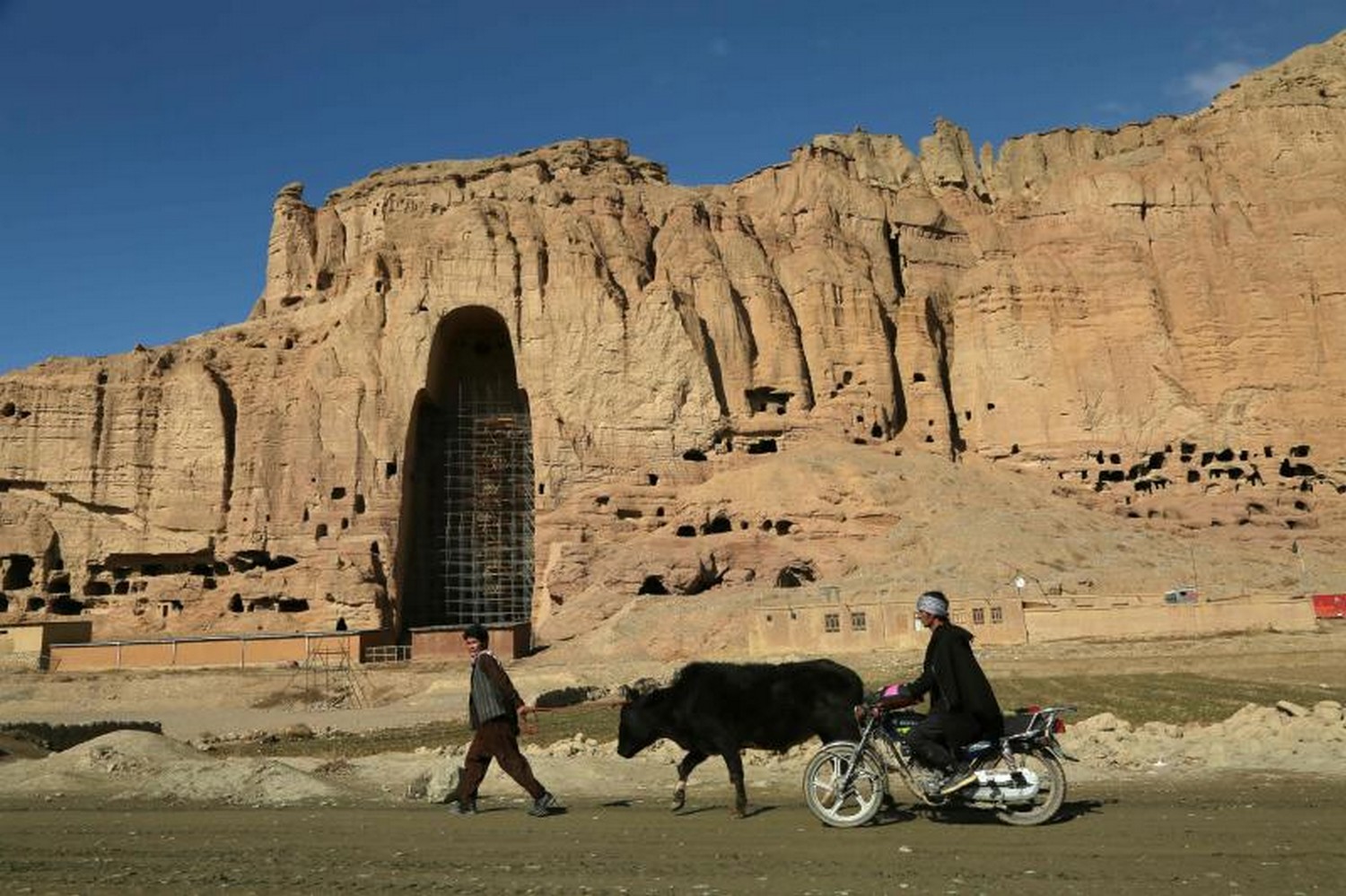 The empty seat of one of the two Buddha statues destroyed by the Taliban in 2001. After bearing the brunt of jihadist dynamite and looting by thieves, the archaeological treasures of Afghanistan’s Bamiyan province are facing a new and possibly more daunting threat - climate change. (Photo: Mohammad Ali Shaida/ AFP)

For Baqe Ghulami, 21, who hails from Saikhand district in northern Bamiyan, climate change has long been a reality residents have had to confront.

"The weather is changing, now summers are warmer and winters colder," he says, while overlooking the empty spaces where the two towering Buddha statues once stood.

Many of the artefacts pre-date the arrival of Islam to the region but despite the fact they come from another religion, the residents who spoke with AFP proudly defended the area's history as their own.

From the empty caves, visitors can see the Cultural Center, which began construction in 2015 but has yet to be completed.

It aims to educate visitors about the urgent need to preserve the area's heritage.

"There is no benefit if people just see (the sites) without information," says Ali Reza Mushfiq, 26, director of the Department of Archeology at Bamiyan University, complaining that a dearth of funding has left many in the dark -- including his own students who lack access to books.

The archaeologist readily admits that "erosion is increasing", but believes the real danger comes from "human influence at the site", including looters, who are rampant in Afghanistan.

The Shar-e Gholghola Fortress and other key sites are now guarded to protect against such issues.

The removal of landmines from the area has seen thousands visit in recent years, but the influx of recent visitors has done little to change the reality on the ground.

"We must start training... (the) local people to teach them how not to destroy the site," says Mushfiq, adding that some residents continue to store feed and house livestock in the historic sites.

A stone's throw from the cave of the great Buddha, Ammanullah, 37, says he and his family have moved into one of the caves, building a home inside made of odds and ends with plastic sheets for windows.

He is not alone, many other poor families have sought shelter next to ancient artefacts and structures.

"There are 18 families here… we didn’t have other options," says Ammanullah.

"We would go if we were given a house."

For Marquis, however, the greatest threat does not come from local residents encroaching on the site or from theft.

"Even if it is dramatic, it is much less damaging than the destruction caused by erosion," he said.

Mitigating the impacts of erosion and the effects of climate change would cost billions of dollars in Afghanistan, but the war-torn country has little ability to shoulder such a burden.

The Global Adaptation Initiative, run by the University of Notre Dame in the US, currently ranks Afghanistan 173 out of the 181 countries it scored in terms of a nation's vulnerability to climate change and its ability to adapt.