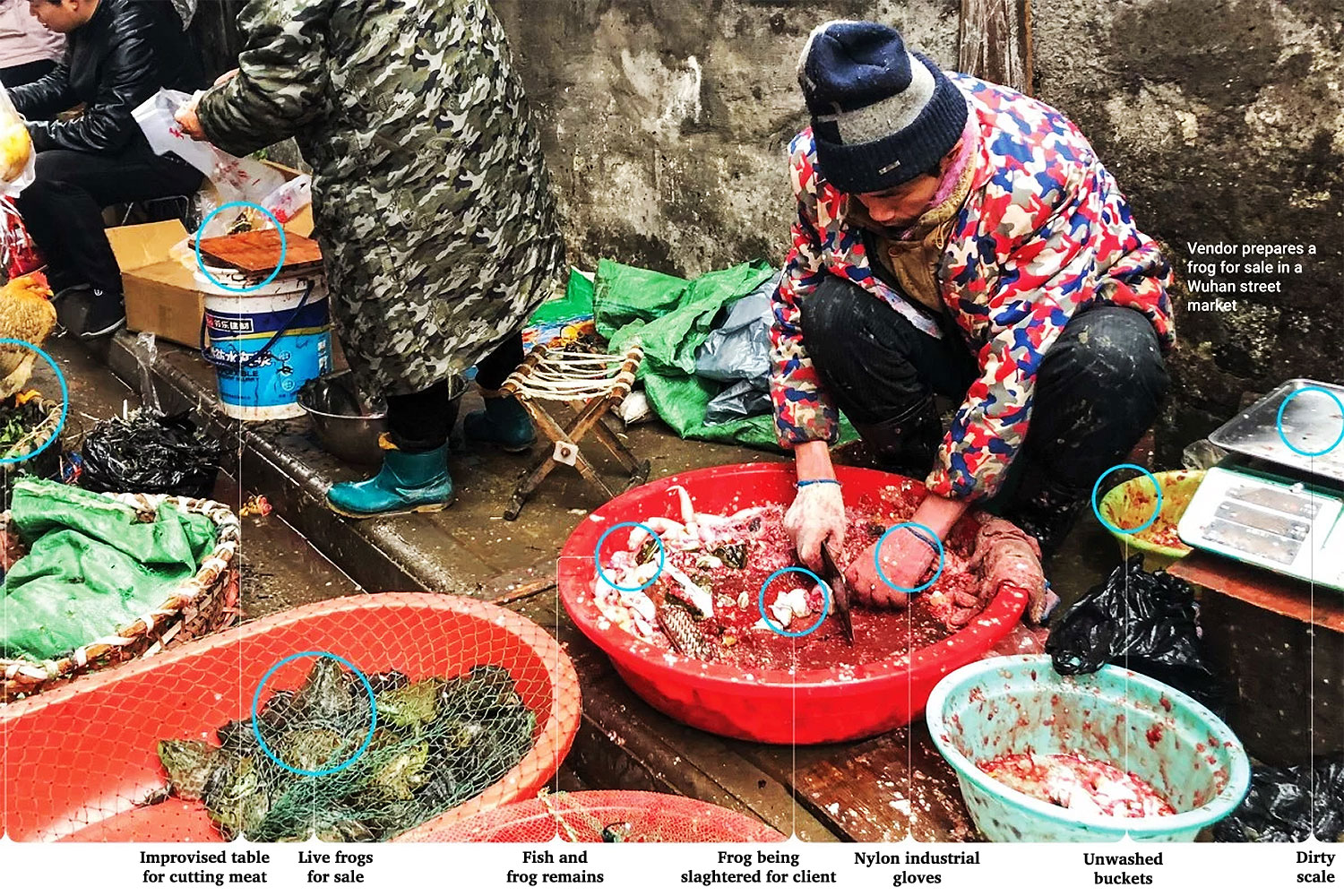 According to official reports, as of 11pm Wednesday, the previously unknown coronavirus had killed 17 people and infected 541 others.

Most of the infections and all of the deaths were in Hubei province where Wuhan is located, including 375 in the city itself. Many worked or lived near Huanan Wholesale Seafood Market, which experts believe is the source of the outbreak, with the virus jumping from wild animals on sale there.

The market was shut down in late December at the start of the outbreak and is now under surveillance by security staff.

One stall that was on the east side of the market caught people's attention online. According to a menu posted by the stallholder on Dazhong Dianping — the most popular review and rating app in China, around 100 varieties of live animals and poultry were available, from foxes to wolf cubs and masked palm civets.

The civets are thought by the World Health Organisation to have been an intermediate host carrying a virus from bats that jumped to humans in a wet market in Guangdong province near Hong Kong that led to the outbreak of severe acute respiratory syndrome (Sars) in 2002-03. Sars killed 774 people worldwide and infected 8,098 in total.

Residents confirmed that crab, shrimp and striped bass were the main items sold in the 50,000 square metre market, but in other corners, exotic animals were also on offer.

A woman living nearby surnamed Ai, 59, said she saw some stallholders selling live animals in the market.

"There were turtles, snakes, rats, hedgehogs and pheasants," she said. She added that more stalls in the west part of the market sold live animals.

Another stallholder who sells vegetables near the seafood market said he knew the market sold live animals.

"Some stalls have more kinds [of live animals] and some have less, but they have sold these for a long time," he said, declining to give his name because of the sensitivity of the issue.

A notice from the Wuhan Administration for Industry and Commerce in September also showed that live animals were on sale in the market. In the notice, it said government officials inspected eight stalls that sold live animals, including tiger frogs, snakes, and hedgehogs, and checked their wildlife business licences and approval documents. "Unapproved wildlife business is strictly forbidden," it said.

Captive breeding of wildlife for commercial purposes is allowed in China but companies must get a licence from provincial authorities, according to the national wildlife protection law.

Health authorities in Wuhan said on Sunday they would increase controls on agriculture and seafood markets, and ban the sale of live poultry and wildlife.

That ban was spelt out in banners hanging from the gate and along the streets to Wuhan's Bashazhou agricultural market just outside the third ring road on Tuesday. The market is the biggest wholesale outlet of its kind in central China and sells vegetables, fruit, seafood and agricultural by-products. But one of the vendors, Duan, who mainly sells salmon, said he had never heard about wild animals being traded in the market.

There was also no obvious sign of live poultry or wildlife for sale 1,000km away at a wet market in Yuexiu district in Guangzhou, a city known for adventurous diners.

Many mainland cities including Guangzhou, Shenzhen, and Beijing have banned sales of live poultry and animals in their downtown area in the wake of epidemic disease outbreaks in recent years.

However, one Yuexiu vendor said he had live chickens for sale. "Wait a moment. I'll get it from the back door," he said.

Trading was hectic in a market in Conghua district, also in Guangzhou, where the sale of live poultry was legal. Live chickens were sold at 17 yuan (75 baht) for half a kilogram at some stands, where dozens of potential customers were in lively bargaining with stall holders, undeterred by developments in Wuhan.

Zhong Nanshan, director of the China State Key Laboratory of Respiratory Disease and a world expert on the Sars virus, said after a visit to Wuhan that the source of the new type coronavirus was probably from wildlife, such as bamboo rats or badgers.

"The outbreak concentrated in two districts in Wuhan, where there are big seafood markets," Zhong said in an interview with state broadcaster CCTV on Monday.

"While they are called seafood markets, many vendors are selling game. According to preliminary epidemiological analysis, the virus is probably transmitted from wildlife [at the markets] to humans."

Shi Zhengli, a researcher with the Wuhan Institute of Virology at the Chinese Academy of Sciences, said the real problem was in people's behaviour, rather than with the animals.

"The simplest way to prevent such infectious diseases is to stay away from wildlife, say no to game, avoid their habitats and livestock and farms mixing with wildlife," Shi said.

"While the West values freedom and other human rights, Chinese people view food as their primary need because starving is a big threat and an unforgettable part of the national memory," Hu said.

"While feeding themselves is not a problem to many Chinese nowadays, eating novel food or meat, organs or parts from rare animals or plants has become a measure of identity to some people."

The 2003 Sars outbreak saw a decline in consumption of exotic animals by normally adventurous Chinese diners in the following years. According to a survey released in 2006 by San Francisco-based WildAid and the official China Wildlife Conservation Association, about 70% of 24,000 people surveyed in 16 mainland cities had not eaten wild animals in the previous year, up from 51% in a similar survey in 1999. While number fell, it showed 30% of those surveyed were still eating wildlife.