WUHAN, China: The Lunar New Year festivities were just hours away, but instead of helping to prepare a joyous family banquet, Chen Yanming stood anxiously outside a hospital where her father was being tested for a dangerous new virus.

"Today should be the Chinese people’s happiest day," Chen, 47, said here in Wuhan, the riverside city of 11 million in central China where the outbreak began. "But this sickness has destroyed that feeling. It came suddenly and unexpectedly. We should have been better prepared."

The emergence of the mysterious coronavirus could hardly come at a worse time for China, turning its biggest holiday into a time of deepening fear, restrictions and frustration.

The pneumonia-like illness linked to the virus has, by official count, stricken nearly 1,300 people in mainland China. At least 41 people have been killed, including 15 new deaths in Wuhan reported by officials on Saturday morning alone. More than 20 other cases have been confirmed elsewhere, including five in Hong Kong, two in the United States, three in France and, on Saturday, one in Australia.

Hundreds of millions of people in China travel during the holiday, increasing the risk of spreading the virus. For many migrant workers from the countryside, the Lunar New Year break is the only opportunity to spend extended time with their children. For growing numbers of Chinese people, it is a time for tourism to Beijing and other cities, or to foreign destinations.

But this year, desperate to contain the disease, Chinese authorities have shut down transport or imposed travel restrictions in 13 cities in Hubei, the province at the center of the outbreak, hemming in 35 million people. Business closures are spreading in other cities.

The streets across Wuhan were eerily empty Friday, except near hospitals. The city has been largely shut down: Departures are mostly barred, and subways, buses and ferries within Wuhan are suspended. Many residents lined up at hospitals to check for the illness or stayed indoors rather than reuniting with family.

At the entrance to the hospital where Chen waited, cars and bicycles arrived with frail older people to be checked. Residents said it had become nearly impossible to find taxis following the ban on public transportation. Doctors and medical workers struggled to cope with the surge of people worried that they had symptoms of the virus.

At another hospital taking in possible cases of infection, an old man sat in a wheelchair outside the building. It was too crowded and unhealthy inside, he said. Another patient shuffled across the street holding a drip in his arm and its stand so he could stay away from the crowd inside the hospital.

"We won’t have a New Year celebration tonight. There’s no mood for it," said Wu Qiang, a middle-aged Wuhan resident waiting outside a hospital for word about his son, who had a fever. "I think he’s OK, but now even an ordinary sneeze makes you worry. You start to think every cough or sneeze might be the virus."

For many families in Wuhan, the Lunar New Year holiday now promises to be a week of anxious waiting — for medical resources and clarity about when they will be free of the virus and able to travel.

"The government announced there were thousands of beds, but everywhere is crammed with people," said Xiao Hongxia, a Wuhan resident who said that her father, Xiao Shibing, was not getting full care for what might be illness from the virus. At one hospital, she said, "the doctors were crying that they were helpless to do anything."

Twenty-nine of China’s 31 provinces and regions have confirmed cases, and two deaths have occurred far from the outbreak’s epicentre, one of them nearly 1,500 miles away. Cases have also been detected in Thailand, Vietnam, Singapore, Japan, South Korea, Nepal and Taiwan.

Officials at Shanghai Disneyland, one of the biggest tourist attractions in China, and at the Badaling section of the Great Wall of China, a popular tourist destination north of Beijing, said they would temporarily close beginning Saturday.

Beijing cancelled public events, including two popular temple fairs, and closed the Forbidden City, the capital’s most famous tourist attraction, until further notice. Many cities shuttered movie theaters, bars and cafes in an effort to limit the spread of the virus.

Gauden Galea, the representative of the World Health Organization in Beijing, said Friday that thousands of people would likely be infected and that the outbreak could be long.

"My own office is gearing up for a number of months," Dr Galea said. "We do not expect it to disappear in a number of days." 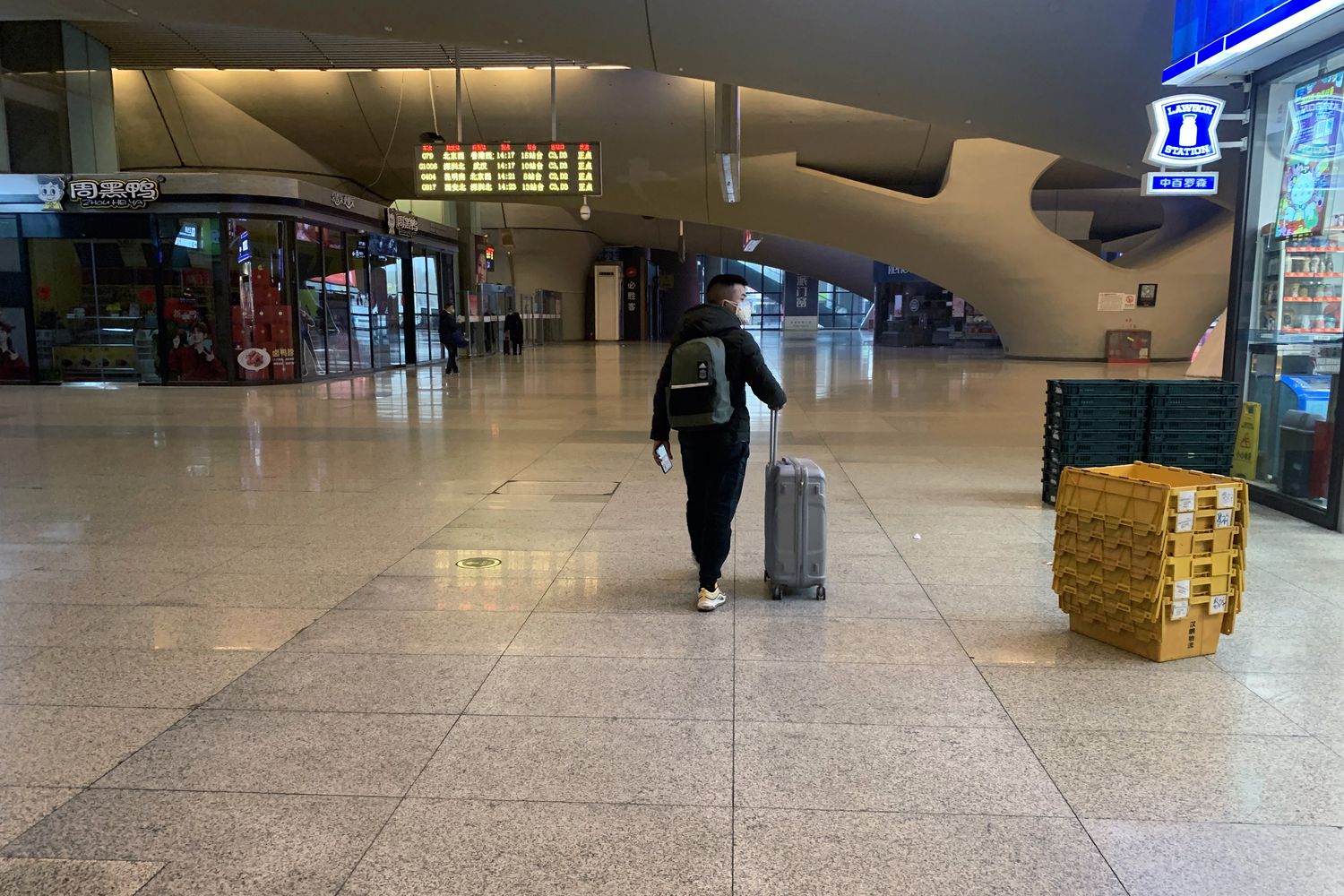 A passenger walks on Thursday through the railway station in Wuhan, China, where only a few passengers were debarking trains and residents were told that they could not board any. (Chris Buckley/The New York Times)

Here in Wuhan, supermarkets seemed well stocked, but some residents said that prices had gone up or that fresh vegetables and fruit had become harder to buy because so many local markets had closed.

More pressing are shortages of protective gowns, masks, gloves and other equipment to keep medical workers as safe as possible. Supplies have grown scarce in Wuhan under the weight of the epidemic, hospital employees in Wuhan said.

Outside the No.4 Hospital in Wuhan, two medical workers taking boxes of protective gowns from a truck said the gowns did not give maximum protection from the virus but would have to do because better supplies were lacking. Some doctors and medical workers have bought their own maximum-protection masks because hospitals were running short, one of them said.

The Wuhan government Friday ordered that a new hospital be constructed in a matter of days to treat victims.

The hospital, modelled on one constructed in Beijing for the Sars epidemic in 2003, will have room for 1,000 beds and is expected to be finished by Feb. 3, according to a local media report posted to the Wuhan government’s website.

Dr Galea, who visited Wuhan this week before the lockdown, defended how Chinese officials had handled the outbreak, saying they had been transparent in sharing data.

"With the number of cases," he said, "one would expect health systems to be stretched."

But online and in interviews, people around China have been unusually critical of their government, arguing that officials are reluctant to disclose bad news that might sully the Communist Party’s image of triumphant progress.

In posts on Chinese social media platforms, some users called for Wuhan leaders to be dismissed. Others mocked the failure of the Communist Party’s flagship media to treat the epidemic with front-page urgency. Most of those posts were quickly removed.

In a sign of how far the outbreak has scrambled the Communist Party’s messages, the annual Lunar New Year variety show on the main national broadcaster — which usually gives a cheerful face to the party’s themes — made nods to the crisis.

The show broadcast images of doctors and nurses treating patients, of trucks of supplies festooned with banners that said, roughly translated, "Go Wuhan!" The presenters declared that the fight against the coronavirus was open, transparent and a testament to the abilities of the Chinese government.

"For Wuhan people, tonight the table should be filled with dishes of fish and meat," said Chen. "But with my father sick, we’ll have a few simple dishes."

Mobile users may face higher charges based on combined additional expenses of 1.7-13.6 billion baht per month, depending on the degree of market dominance once the merger of True and DTAC takes place.