EU expected to bar US travellers

The European Union is expected to welcome travellers from Thailand but bar those from the United States and other high-risk countries after the bloc’s external borders reopen on July 1, diplomatic sources say.

The list of 15 countries from which travel will be allowed because they have a low coronavirus risk is subject to approval later on Saturday. It is expected that the EU will want travel agreements with any of the countries it approves to be reciprocal. Many details remain to be negotiated, so no one is expected to be booking flights anytime soon.

In addition to the US, other high-risk countries from which non-essential travel will be banned include Russia and Brazil.

The EU decision comes as America’s top infectious diseases expert warned that his country is facing a “serious problem” from a resurgent coronavirus, where officials of two of the country’s most populous states were forced to scale back economic reopening.

The contagion also continued its march through Latin America, where Brazil recorded another 1,140 deaths and Argentina toughened a lockdown in the capital Buenos Aires.

In Europe, countries are wrangling over plans to partially reopen the EU border, with officials fretting over the reliability of virus data from abroad, notably China, where Covid-19 first emerged late last year.

But the European Union is moving closer to recommending that travellers from the US be stopped from entering the bloc even after July 1, according to a draft decision being considered by member governments.

Diplomats who met on Friday agreed on a provisional list of 15 approved countries, according to a draft seen by Bloomberg.

Chinese residents would be allowed in, as long as Beijing confirms that it will also let citizens of EU states travel to China, according to the document.

A decision to extend a ban on visits from the United States, while allowing travel from China, could have geopolitical implications.

The bloc’s governments have been asked to indicate by Saturday afternoon whether they agree on the proposed text, so that a formal decision can be taken.

With nations around the world at different stages on the outbreak curve, agreeing on travel corridors or “bubbles” has proved tricky.

Britain said it will lift its two-week quarantine rule for visitors arriving from some “low-risk” countries after pressure from airlines.

Sweden lashed out at the World Health Organization for listing it among countries deemed to be at risk. The country has made headlines for its high death toll after opting not to introduce a strict lockdown.

“We have an increase in cases because we have begun testing much more in Sweden the past week,” said Swedish state epidemiologist Anders Tegnell.

Much of the Western world is continuing to press ahead with lifting restrictions on daily life despite warnings from health officials that haste could cost more lives.

“We are facing a serious problem in certain areas,” top US immunologist Anthony Fauci said at the first briefing in two months by the White House’s Coronavirus Task Force.

“The only way we’re going to end it is by ending it together,” the director of the National Institute of Allergy and Infectious Diseases said of the outbreak.

Fauci said government health officials had issued guidance to follow but often “the citizenry did not feel” they wanted to do that.

“You have an individual responsibility to yourself but you have a societal responsibility, because if we want to end this outbreak, we’ve got to realise that we are part of the process,” he said.

The US is recording more than 30,000 cases daily. With nearly 125,000 lives lost, it has by far the highest confirmed death toll in the world.

Texas had been among the most aggressive states in easing curbs but its strategy has backfired with the country’s second most populous state seeing several daily records in the number of new infections.

“It is clear that the rise in cases is largely driven by certain types of activities, including Texans congregating in bars,” Governor Greg Abbott said.

While the number of cases has been rising, daily death rates are falling as many of the new cases involve healthy younger people under 40. Still, authorities are anxious that they could end up infecting older people or other at-risk Americans.

In Texas, Governor Greg Abbott issued a sweeping order to close taverns and force restaurants to limit occupancy to 50%, among other measures. The steps were applauded by Democratic city and county leaders who have been at loggerheads with the Republican governor for weeks over his decision to reopen the state’s economy.

Bars and nightclubs “were just out of control. Not all of them but some of them”, Houston Mayor Sylvester Turner said. Closing them “is a very positive step in the right direction”.

Coronavirus cases in the US rose by 41,925 on Friday to 2.45 million, according to data collected by Johns Hopkins University. The 1.7% increase was above the average daily rise of 1.5% over the past week.

The Coronavirus Task Force is focused on 16 states where new cases are rising, Pence said in Washington, with the remaining states “reopening safely and responsibly and seeing low and steady cases and not seeing a rise”.

“We believe we’ve made progress but as we are reminded as we see cases rising across the South, that we still have work to do,” he said.

Pence noted about half the new cases were in Americans under the age of 35. 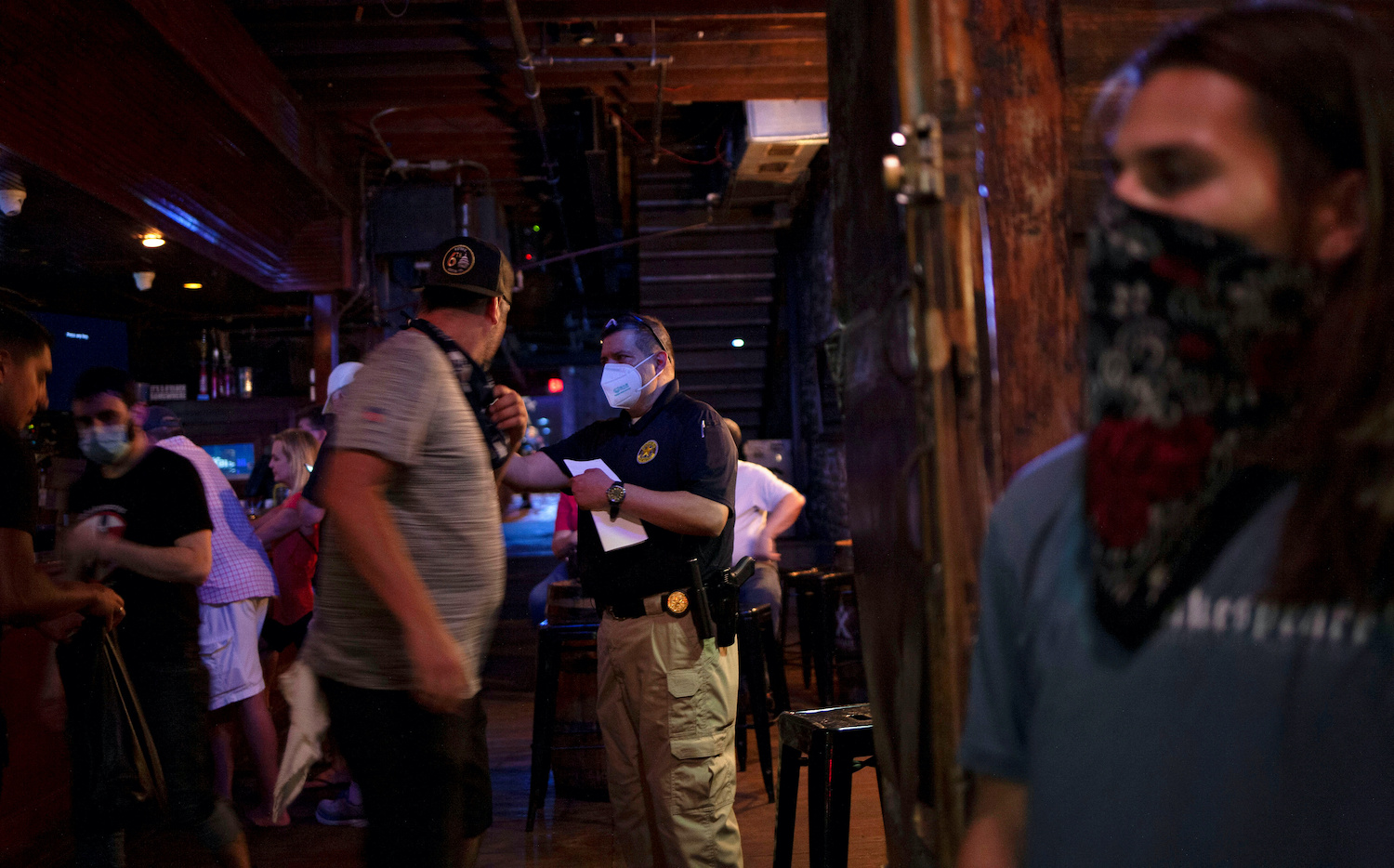 Agents from the Texas Alcoholic Beverage Commission visit a nightspot in Austin to check on social distancing protocols in May. The state has been forced to close its bars again as Covid-19 cases have picked up. (Reuters Photo)