Chasing the virus: How India's largest slum beat back a pandemic
World

Chasing the virus: How India's largest slum beat back a pandemic

Mumbai's Dharavi slum offers a rare glimmer of hope, as new infections shrink thanks to an aggressive strategy of 'chasing' the virus.

MUMBAI: When coronavirus claimed its first victim in India's largest slum in April, many feared the disease would turn its narrow, congested streets into a graveyard, with social distancing or contact tracing all but impossible.

But three months on, Mumbai's Dharavi offers a rare glimmer of hope with new infections shrinking, thanks to an aggressive strategy that focused on "chasing the virus, instead of waiting for disaster", according to city official Kiran Dighavkar.

The sprawling slum has long been a byword for the financial capital's bitter income disparities -- with Dharavi's estimated one million people scraping a living as factory workers or maids and chauffeurs to Mumbai's well-heeled residents.

With a dozen people typically sleeping in a single room, and hundreds using the same public toilet, authorities realised early that standard practices would be of little use.

"Social distancing was never a possibility, home isolation was never an option, and contact tracing was a huge problem with so many people using the same toilet," Dighavkar told AFP.

An initial plan to conduct door-to-door screenings was abandoned after Mumbai's searing heat and humidity left medical workers feeling suffocated under layers of protective equipment as they combed the area's cramped alleys for cases.

But, with infections rising fast and fewer than 50,000 people checked for symptoms, officials needed to move quickly and get creative.

What they came up with was coined "Mission Dharavi".

Each day, medical workers set up a "fever camp" in a different part of the slum, so residents could be screened for symptoms and tested for coronavirus if needed.

Strict containment measures were deployed in virus hotspots that were home to 125,000 people, including the use of drones to monitor their movements and alert police, while a huge army of volunteers swung into action, distributing rations so they did not go hungry. 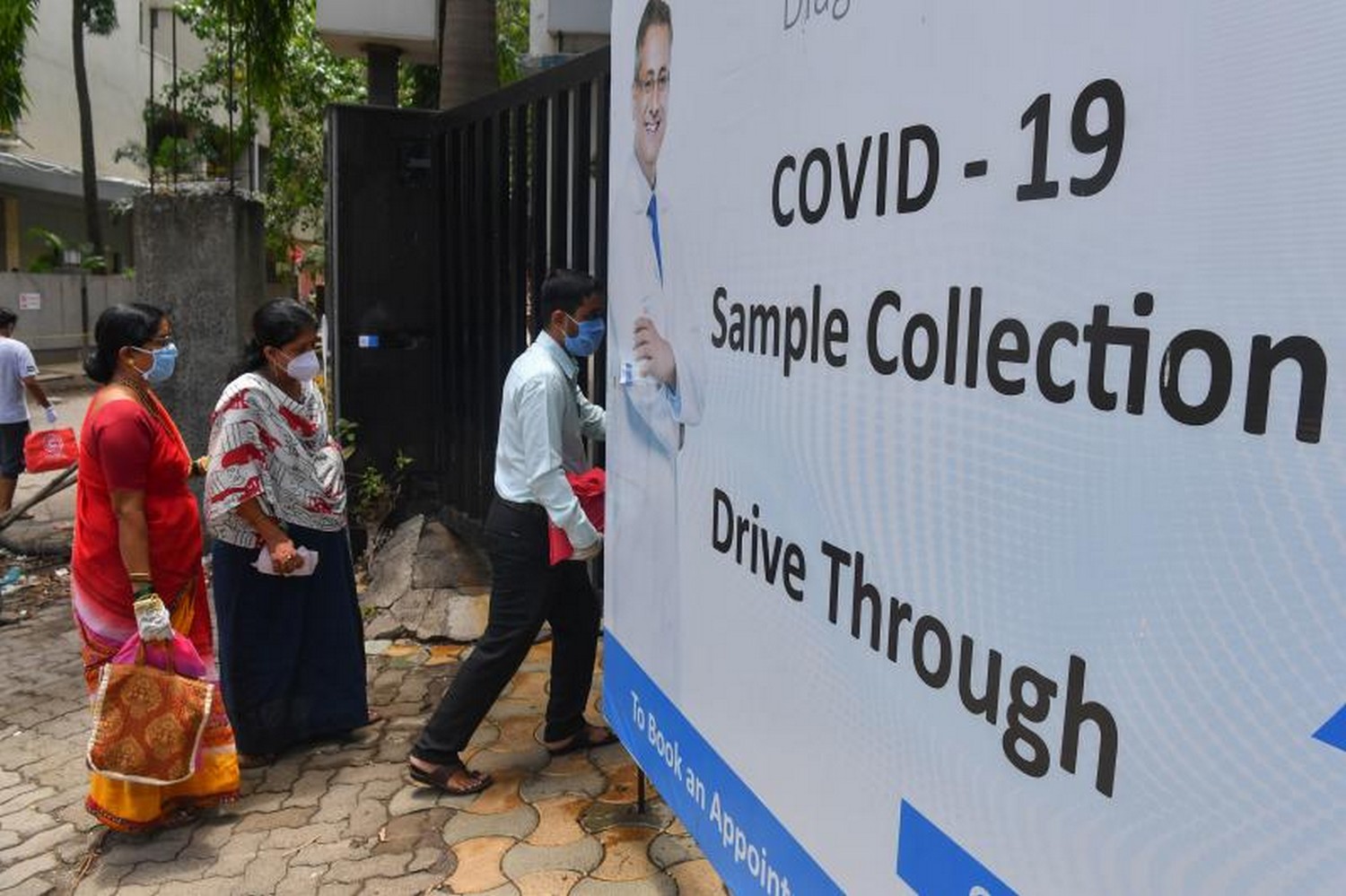 A pregnant woman, centre, is assisted by relatives as they walk into a Covid-19 coronavirus private testing centre in Mumbai on Tuesday. (Photo: AFP)

Bollywood stars and business tycoons paid for medical equipment as construction workers built a 200-bed field hospital at breakneck speed in a park inside Dharavi.

By late June, more than half the slum's population had been screened for symptoms and around 12,000 tested for coronavirus.

So far Dharavi has reported just 82 deaths -- a fraction of Mumbai's more than 4,500 fatalities.

"We are on the brink of victory, I feel very proud," said Abhay Taware, a doctor who saw around 100 patients daily in his tiny clinic at the height of the crisis.

The 44-year-old father-of-two also had to fight his own battle against coronavirus when he contracted the disease in April, but told AFP he had "no doubts" about returning to work.

"I thought I could show my patients that a positive diagnosis does not mean the end," he said.

Although doctors like Taware worked to reassure worried residents, the stigma persists.

After an isolating 25-day spell in hospital and a fortnight in quarantine, Sushil -- not his real name -- said he now feared discrimination if people found out about his diagnosis.

The 24-year-old also struck a note of caution, warning of a potential resurgence in infections.

"People need to take as many precautions as possible. The numbers might have come down but they can swiftly rise again", he told AFP.

With Mumbai and Delhi struggling to accommodate coronavirus patients as India's cases surge past half a million officials are also wary of celebrating too soon.

"It's a war. Everything is dynamic," said Dighavkar.

"Right now, we feel like we are on top of the situation," he said.

"The challenge will be when factories reopen," he added, referring to the billion-dollar leather and recycling industries run out of Dharavi's cramped tenements.

And some in the slum fear their community might not be as lucky next time.

On a blazing morning, as car salesman Vinod Kamble lined up to have his temperature taken, he recalled his terror when the virus landed in Mumbai.

"I felt like Dharavi would be destroyed, and nothing would be left," he told AFP, describing the near impossibility of avoiding infection in the slum.

"Otherwise the next time a disease like this emerges, I don't think Dharavi will be able to escape."