Trump's Proud Boys: US chauvinists who refuse to apologise
World

Members of the alt-right group, the Proud Boys, pray during a rally in Portland, Oregon, on Sept. 26 (Photo: New York Times)

If the Republican activists ever needed security for an event, said the man, Flip Todd, the Proud Boys were available. They had sworn loyalty to the country and the president, he said. “We’ll continue to fight for you.”

It took only a few hours to demonstrate what that might entail. As some in the rally caravaned by car to Salem, the state capital, the Proud Boys joined a group of right-wing demonstrators who rushed across a street and began attacking people who had set up a counterprotest. At one point, a large man in a bulletproof vest knocked a much smaller counterprotester to the ground, an event the Proud Boys celebrated later when they posted video of the attack. “Hulk smash!” it said.

The far-right band of brothers who have turned street thuggery into political theater had not quite become a household name before President Donald Trump was asked about the Proud Boys during Tuesday night’s presidential debate, and whether he would condemn white supremacists: “Proud Boys,” he said, “stand back and stand by.”

Within minutes of hearing the president’s remark, Enrique Tarrio, the Proud Boys’ chairman, called down to the T-shirt business he owns in Miami with an order to get the presses rolling. “PROUD BOYS STANDING BY,” the new shirts said.

To Gavin McInnes, founder and former chairman of the Proud Boys, the president’s request was a call to action against antifa, the loose collective of antifascist activists who have mounted raucous street demonstrations against police violence, corporate dominance and inequality in cities across America this summer.

The Proud Boys describe themselves as “Western chauvinists” who “refuse to apologise for creating the modern world.” By reputation, the Proud Boys are a far-right group of brawlers where punches are part of membership initiation. Its participants have espoused misogynistic, Islamophobic, anti-Semitic and anti-immigrant views while making allies with white supremacists whom group leaders claim to disavow.

Over the past four years, the group has engaged in clashes in cities like Portland, Oregon, and Berkeley, California, as well as at the notorious neo-Nazi march in Charlottesville, Virginia, in 2017 that was organized by a Proud Boys member.

Trump sought to quell a backlash from fellow Republicans over his remarks Wednesday, denying any knowledge of the Proud Boys. And some in the Proud Boys sought to create distance as well.

< “I don’t see it, and the organization doesn’t see it, as a direct endorsement,” said Tarrio, the current chairman, contradicting his predecessor. Trump’s remarks about “standing by” were “a small slip,” he said, intended to suggest that the group should “stand by and let the cops do their job.”

< But the president’s remark, which came after Joe Biden, the Democratic candidate, mentioned the group, also attracted attention and approval among avowed white supremacists. “I got shivers. I still have shivers,” wrote Andrew Anglin, the founder of the Daily Stormer, a neo-Nazi website. “He is telling the people to stand by. As in: get ready for war.” (continues below) 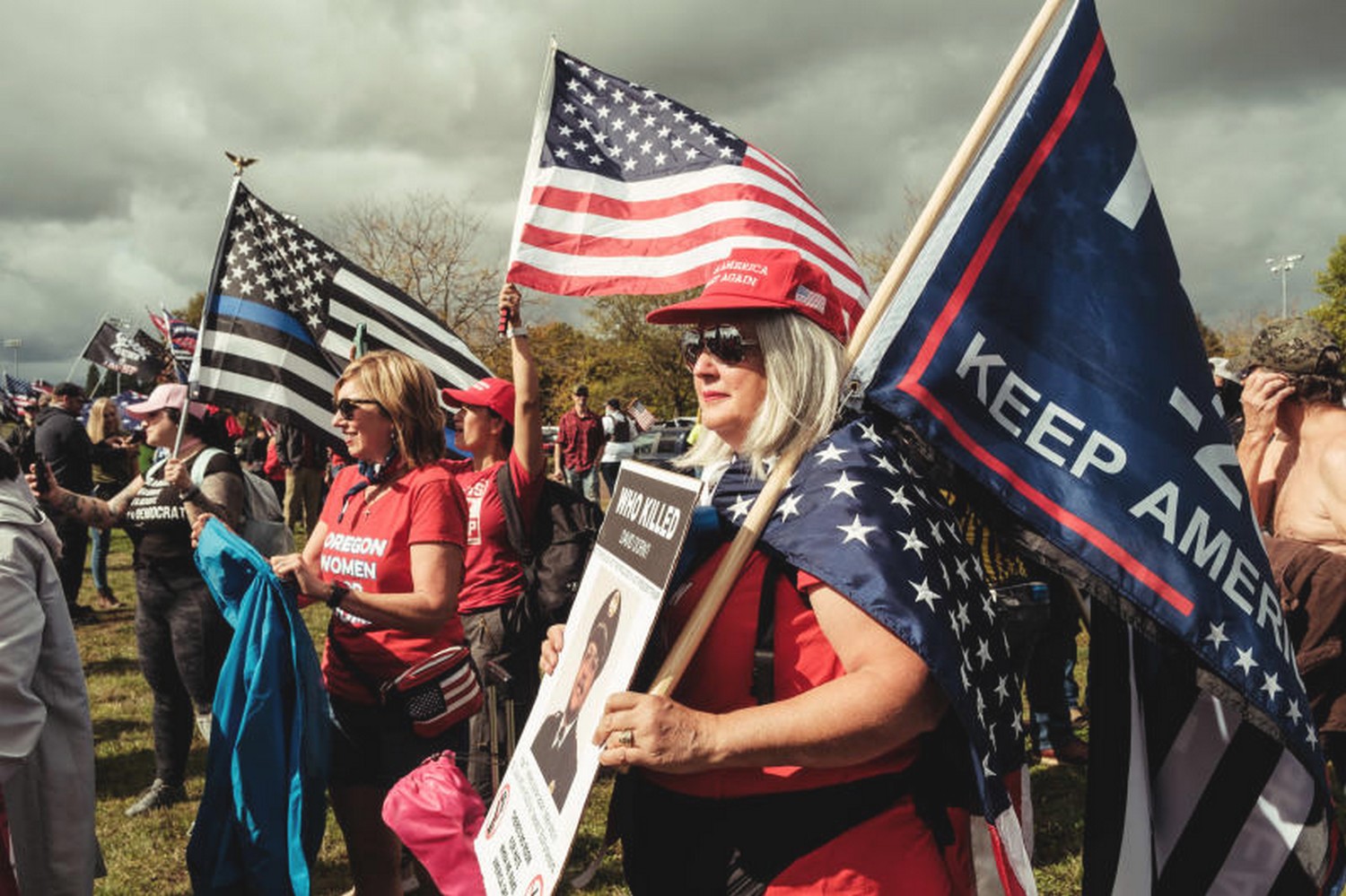 Members and supporters of the Proud Boys gather for a rally in Portland, Oregen, on Sept 26 ((Photo: New York Times)

While the Proud Boys claim to be antiestablishment, they also court members of the Republican elite and count Roger Stone, the conservative political consultant and ally of Trump, among their most high-profile supporters. Stone recorded a voice mail message for Tarrio, who dropped out of the Republican primary for a congressional seat in Florida this year after failing to attract much interest or financial support.

The Proud Boys have been able to make inroads with mainstream conservatives in part because its members wrap themselves in libertarian values, said Samantha Kutner of the Khalifa Ihler Institute, an academic collective that maps far-right groups globally. “It is hard for people to understand the kind of extremism that comes wrapped in the American flag,” she said.

McInnes, a co-founder of Vice, the provocative hipster magazine, established the Proud Boys in 2016 in New York.

He initially conceived of the group as a Knights of Columbus-like drinking club where men could come together in a kind of right-wing safe space. But after Trump took office, he and the group began to serve as bodyguards for ultraconservative speakers like Ann Coulter and Milo Yiannopoulos whose events were protested and occasionally shut down by left-wing activists.

“I love being white and I think it’s something to be very proud of,” he told The New York Times in a 2003 interview. “I don’t want our culture diluted. We need to close the borders now and let everyone assimilate to a Western, white, English-speaking way of life.”

One of the group’s most notorious acts was a motorcade in 2017 through Islamberg, a hamlet in upstate New York, where a number of Muslim families had moved to escape racism and violence in New York City; the Proud Boys falsely accused the Muslims there of training Islamist extremists.

On another occasion, the group crashed a fundraising event for the victims of sexual violence at a bar in Vancouver, British Columbia.

After Kyle Rittenhouse, 17, was arrested in August in the shooting deaths of two protesters in Kenosha, Wisconsin, “Rittenhouse Did Nothing Wrong” was the kind of T-shirt that popped up at Proud Boy rallies.

Much of what the group does “is intended to provoke and trigger people, get them upset to the point that they want to engage in some kind of physical altercation,” Kutner said. Their tactics and ideology have led to accusations that they are the modern face of fascism.

Last year, in sentencing two Proud Boys members to lengthy jail sentences after a brawl in Manhattan, Justice Mark Dwyer of New York State Supreme Court said such acts were particularly dangerous “at this time in the country when people are so divided.”

“I know enough about history to know what happened in Europe in the ’30s when political street brawls were allowed to go ahead,” he said.

Social media platforms such as Facebook and Twitter have at times cracked down on the Proud Boys. Members have migrated to other organizing tools, such as their own website and the instant messaging platform Telegram.

Less than 24 hours after Trump made his comments, two of the largest Proud Boy groups on Telegram added hundreds of new members.

McInnes has claimed the Proud Boys have 5,000 members, with chapters in almost every state as well as about a half-dozen countries. Experts put the number much lower, at anywhere between 1,000 and 3,000. (continues below) 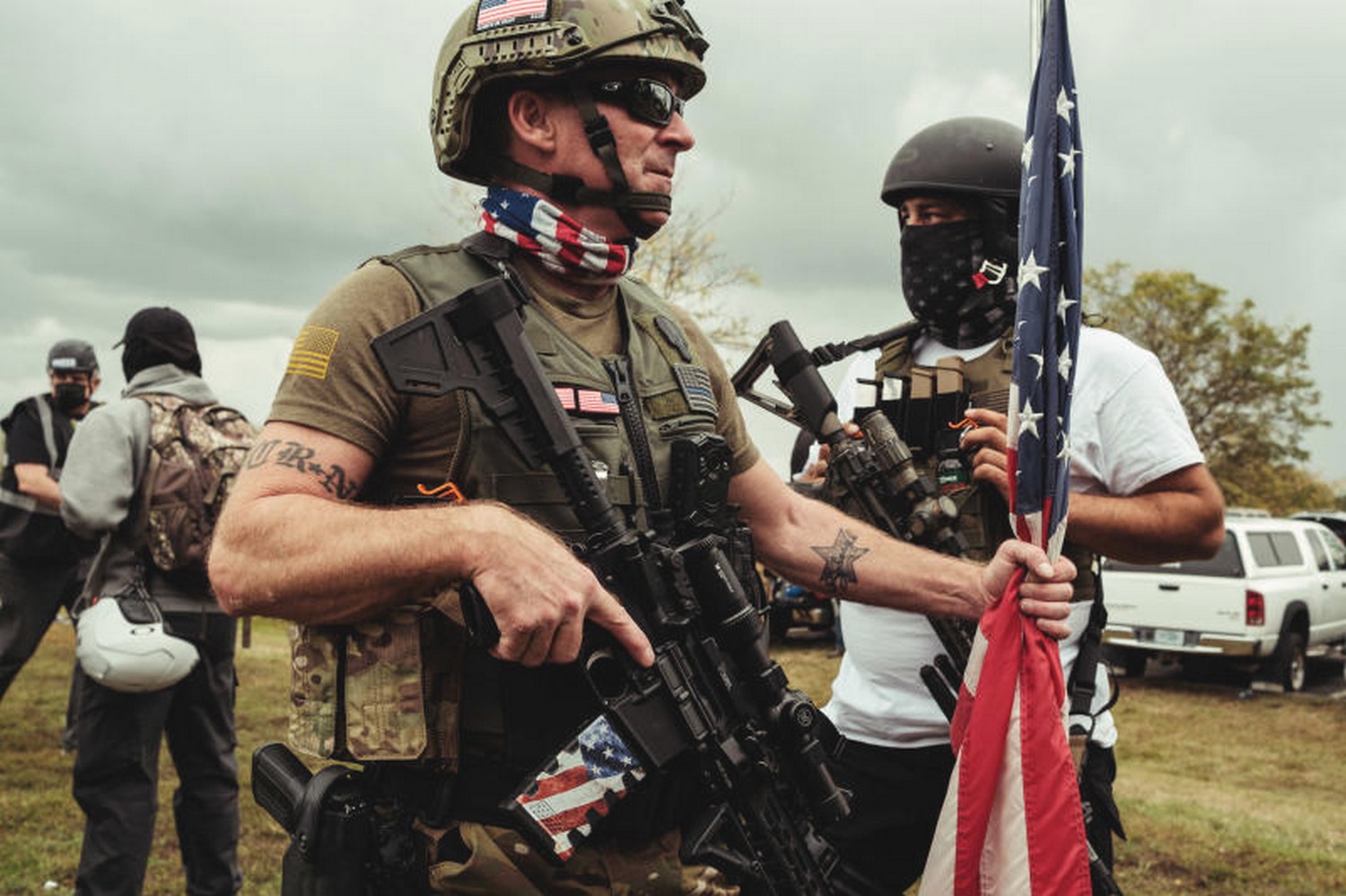 Violence is built into the group’s very DNA. There are four levels of membership, starting with saying the pro-Western creed aloud, then moving higher to a Proud Boys tattoo. The highest level was once reserved for those who engage in violence on the group’s behalf.

The group’s flag, featuring a rooster weather vane pointing west, sports the words “The West is the Best,” and its annual convention, held recently in Las Vegas, is called WestFest. The group’s name was reportedly inspired by a song, “Proud of Your Boy,” written for the Disney film “Aladdin.”

McInnes insisted on Wednesday that there was not “some sort of secret standing army” of Proud Boys and militia men awaiting orders from the president to engage in street fighting. But if violent protests continue around the country, he said, “ordinary Americans are finally going to say, ‘We’re sick of you burning down our cities,’ and they’re going to start fighting back.”

The sources of the group’s funding remain murky. At one point, members seemed to be paying $20 a month in dues, said Megan Squire, a professor at Elon University in North Carolina who tracks extremist groups online. There is considerable overlap in their membership with neo-Nazi groups, she said.

Covid patients infect half of household, says US study