Huge ICBMs rolled out as thousands of troops march maskless

SEOUL: North Korea showed off a gigantic new intercontinental ballistic missile on Saturday that analysts described as the largest of its kind in the world, as the country defied the coronavirus threat with thousands of maskless troops taking part in a military parade.

The ICBM, carried on a transporter-erector-launcher with no fewer than 11 axles, rolled through Kim Il Sung square as leader Kim Jong Un watched from a rostrum, footage from the state broadcaster KCTV showed.

It was the “largest road-mobile liquid-fuelled missile anywhere” Ankit Panda of the Federation of American Scientists said in a Twitter post.

Nuclear negotiations between Pyongyang and Washington have been deadlocked since the collapse of the Hanoi summit early last year and the North is widely believed to have continued to develop its arsenal throughout the diplomatic process.

North Korea already launched missiles with the range to reach anywhere in the continental US in 2017, but analysts suggested the new weapon could have multiple re-entry vehicle capabilities, helping it evade US defence systems.

The missile could see its first test around the time of the inauguration of the next US presidential term, as a signal to either Donald Trump or Joe Biden.

The ICBM was preceded earlier by the Pukguksong-4a, a new submarine-launched missile that would add another dimension to Pyongyang’s arsenal, which it says it needs to deter a US invasion.

Kim — wearing a grey suit — told the crowd that Pyongyang “will continue to strengthen our military for self-defence and deterrence”.

“If you don’t have the strength, you’ll have to wipe away the tears and blood that flow with your two clenched fists,” he added.

Women in the crowd wiped tears from their eyes as he spoke, the footage showed.

The widely anticipated display was part of commemorations of the 75th anniversary of the North’s ruling Workers’ Party, and according to Seoul’s joint chiefs of staff took place early on Saturday, several hours before it was broadcast.

South Korean and US intelligence agencies were “closely tracking the event”, they added.

At the end of December, Kim threatened to demonstrate a “new strategic weapon”, but analysts say Pyongyang will still tread carefully to avoid jeopardising its chances with Washington ahead of next month’s presidential election.

Leif-Eric Easley, a professor at Ewha University in Seoul, cautioned that it was not yet clear how much of the equipment on show “really works”.

But he added: “Politics of deception notwithstanding, the weapons featured in Pyongyang’s processions are a sobering reminder that North Korea will not be ignored.”

During the parade, unit after unit of soldiers from different specialisms marched through the square, with Kim at times smiling and joking with his generals.

Squadrons of warplanes flew overhead dropping flares before a series of armoured vehicles and missiles rolled through streets, and none of the participants or the audience in the stands were wearing masks.

The ruling party anniversary comes during a difficult year for North Korea as the coronavirus pandemic and recent storms add pressure to the heavily sanctioned country.

The North has a ramshackle health system that would struggle to cope with a major outbreak and Kim closed its borders in January to try to prevent contamination from the disease that first emerged in neighbouring China.

Despite it since sweeping the world, with more than 36 million cases, he said the North had not seen a single infection, and he repeatedly thanked his citizens for their efforts.

“Kim could even be seen choking and tearing up as he was reading his speech,” said former US government North Korea analyst Rachel Lee, describing the address as a departure from “the boilerplate we have seen for years”.

Kim’s summit counterpart Trump was recently hospitalised with the illness and while did not mention the US president or his country directly, he wished “good health to all the people around the world who are fighting the ills of the evil virus”.

But Harry Kazianis of the Center for the National Interest warned that no one at the event was social distancing or wearing facemasks.

“While some would argue this is a show of strength, such grandstanding is sheer folly,” he said, adding: “The Kim regime is playing with the lives of his own people.”

Unlike on many previous occasions, no international media were allowed in to watch the parade.

And the few foreigners remaining in Pyongyang were not welcome at the commemorations, according to the Russian embassy, which posted a message from the authorities on its Facebook page urging diplomats and other international representatives not to “approach or take photos” of the venues.

Kim is the third member of his family to lead the country. But in a possible signal of changing emphasis, the large-scale portraits of his grandfather, the North’s founder Kim Il Sung, and father Kim Jong Il appeared to have been removed from their positions on the rostrum in the square.

Instead other images were installed farther back and higher up on another building, the Grand People’s Study House. 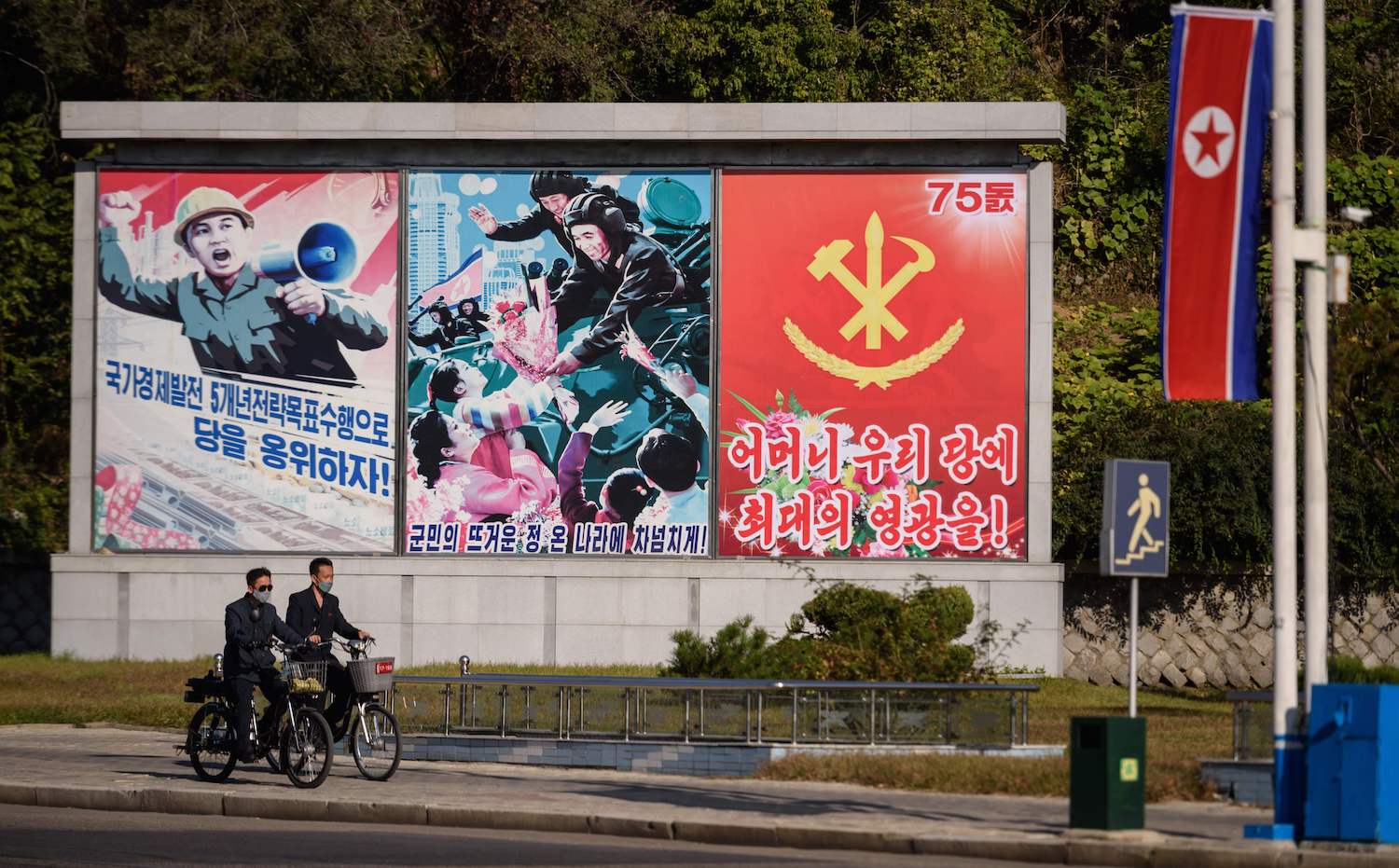 Two cyclists pass posters marking the 75th anniversary of the founding of the Workers’ Party of Korea in Pyongyang on Saturday. From left to right, they read: “Let’s defend the party by fulfilling the five-year strategic goal of national economic development”, “The passion of the military overflows with the whole country!”, and “Mother, the greatest glory to our party!” (Photo: Kim Won Jin/AFP)