British Prime Minister Boris Johnson addresses a news conference about the spread of the coronavirus disease at Downing Street in London. Reports say he might announce an England-wide lockdown on Monday. (Reuters Photo)

England is considering a one-month stay-at-home order, with exemptions for schools and universities, the BBC reported, as cases rise by record rates.

Germany will begin a partial shutdown on Monday, with bars, restaurants, leisure facilities and cultural venues shut, while schools and most shops remain open.

France started its version of “lockdown lite” on Friday, as governments rush to try to stem the outbreak in Europe, where more than 215,000 people have died from the disease and nearly 7 million have been infected. Worldwide, infections now exceed 45 million with deaths approaching 1.2 million.

With protests multiplying and political unity fraying, officials are hoping they can bring the disease back under control as Europe heads into the winter, allowing them to avoid the sweeping restrictions that plunged the continent into recession in the spring. Here is the latest in Britain, Germany, France, Italy and Spain:

Prime Minister Boris Johnson is considering imposing a new month-long national lockdown for England after scientists warned the virus was spreading faster than their worst predictions.

The pandemic is spreading in most parts of Britain, where the official death toll of 46,299 is the highest in Europe. Italy, France and Spain each have more than 35,000 deaths

Johnson is expected to hold a news conference on Monday to announce the new measures, which would allow only essential shops and schools, nurseries and universities in England to remain open, The Times newspaper said.

The new measures were still under discussion, and no final decision had been made, the paper said, citing a senior government source.

The prime minister’s office did not immediately respond to a request for comment from Reuters.

Currently, the government has a three-tier system of restrictions for local areas in England, with Level 3 the highest. Scotland, Wales and Northern Ireland have their own policies for fighting the pandemic.

A member of the government’s Scientific Advisory Group for Emergencies (Sage) warned on Saturday that the virus was spreading far more widely than before.

“And unlike the first wave, where we had a national lockdown which protected huge swathes of society, this outbreak is now running riot across all age groups,” Calum Semple, a professor of outbreak medicine at the University of Liverpool, told the BBC.

Johnson may have been swayed by new data seen by the BBC showing that the daily death toll could go as high as 4,000 if stricter policies aren’t brought in to slow the spread. That’s about four times the daily rate at the first peak of the virus. (Story continues below) 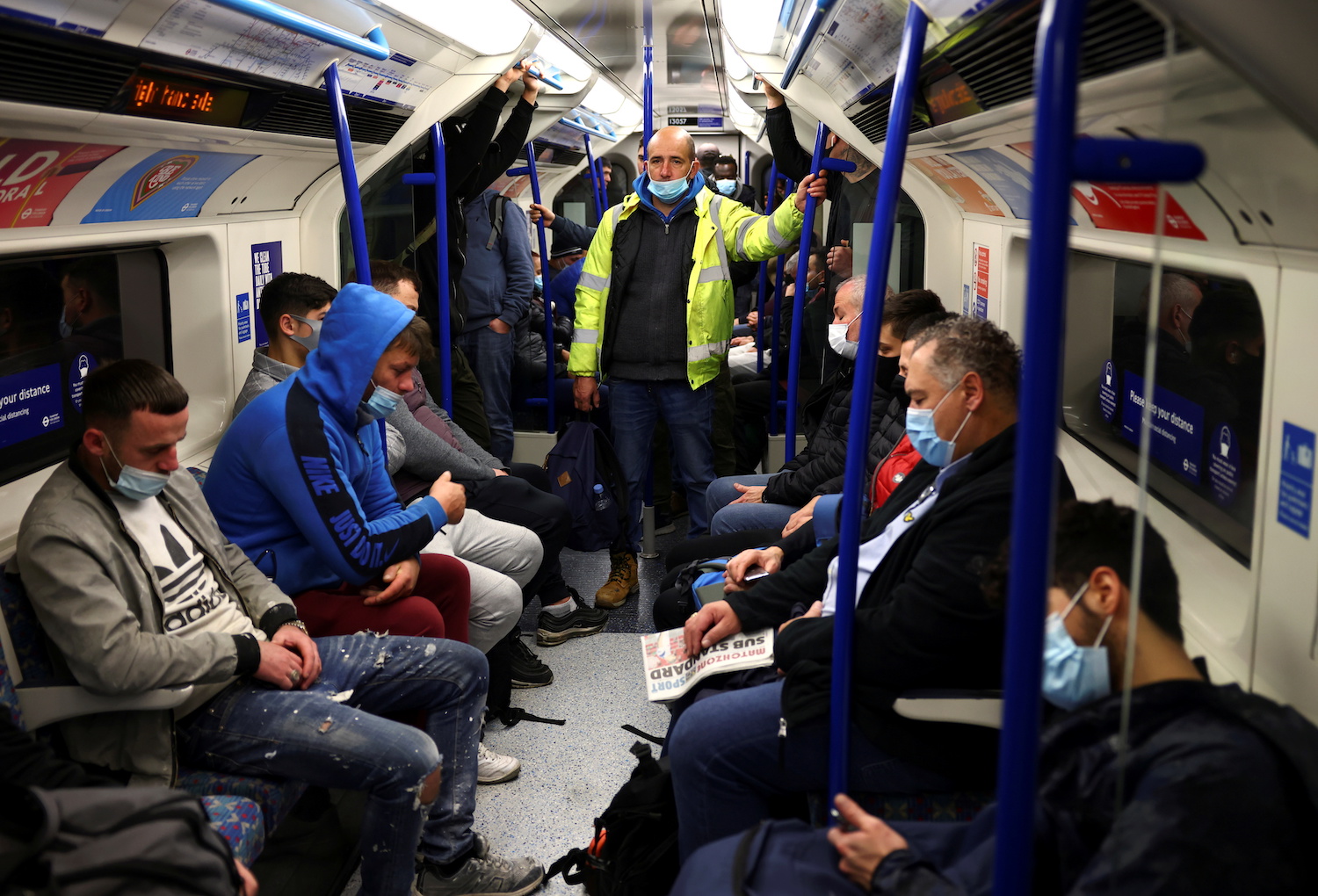 Commuters travel on the Underground in London on Friday. (Reuters Photo)

After talks on Wednesday with 16 regional premiers, Chancellor Angela Merkel announced measures to severely limit movement, while keeping schools open and the economy ticking over.

Merkel said that the country is in a “dramatic situation”, with healthcare services stretched close to the limit and authorities no longer able to track infections back to their source.

If Germany waits until intensive care units are full, it will be too late, she said, warning of “four long and difficult winter months” ahead.

More than 19,000 new cases were reported on Friday, the second-highest daily number yet.

France’s goal is to limit the economic contraction to 15% during the latest lockdown, about half of the 30% decline during the one that started in March, according to Finance Minister Bruno Le Maire.

That was caused in particular by a halt to construction work, while this time building sites and stores selling building materials will remain open, as well as government services handling permits.

The announcement of the new curbs came less than a week after France expanded a curfew to about two-thirds of the population. “The virus is circulating in France at a speed that even the most pessimistic forecast didn’t foresee,” President Emmanuel Macron said Wednesday.

On Friday, France reported the most new deaths since April 20, the same day the first lockdown went into effect.

Italy, which has been under a partial lockdown for the last week, could also add measures including a ban on travel between regions “in the coming hours”, Corriere della Sera newspaper reported on Saturday.

Milan, Naples, Bologna, Turin and Rome are among cities that could face lockdowns of at least some sections of their metropolitan areas, according to the newspaper.

Prime Minister Giuseppe Conte would prefer to wait a few days before adding new restrictions, but he is under pressure from factions in his coalition favouring more action as the virus threatens to overwhelm the health system, it said.

A next round of restrictions could involve targeted shutdowns of entire urban areas, possibly including hard-hit Milan and Naples, local media have reported. The country could still go into a near-full lockdown as soon as Nov 9 if infection figures continue spiking, according to the newspaper Il Messaggero.

Italy has already set an 11pm curfew, curtailed operating hours for restaurants and bars, and shut down gyms, swimming pools and entertainment venues.

Reported new cases exceeded 30,000 on Friday for the first time since the pandemic began.

A majority of Spain’s 17 regions have already closed their domestic borders or will do so this week, preventing non-essential travel.

Targeted regional lockdowns will remain in force until after Nov 9, and cover consecutive bank-holiday weekends, which would typically lead to massive flows of travelers moving across the country.

Regional authorities have extraordinary powers to declare curbs on movement after Prime Minister Pedro Sanchez announced a state of emergency on Oct 25. Spain this week reported more than 9,000 daily coronavirus infections on two consecutive days, the most since tracking started.

City of centenarians points the way for China's ageing future