Anti-coup demonstrators, many with signs showing support for a civilian-formed federal army, hold candles and sing protest songs as they sit in the streets of Yangon, Myanmar, on April 3, 2021. (New York Times photos)

Late last month, foreign officials in army regalia toasted their hosts in Naypyitaw, the bunkered capital built by Myanmar’s military. Ice clinked in frosted glasses. A lavish spread had been laid out for the foreign dignitaries in honor of Myanmar’s Armed Forces Day.

That very day, the military, which had seized power Feb 1, gunned down more than 100 of its own citizens. Far from publicly condemning the brutality, the military representatives from neighbouring countries — India, China, Thailand and Vietnam among them — posed grinning with the generals, legitimizing their putsch.

The coup in Myanmar feels like a relic of a Southeast Asian past, when men in uniform roamed a vast dictators’ playground. But it also brings home how a region once celebrated for its transformative “people power” revolutions — against Suharto of Indonesia and Ferdinand Marcos of the Philippines — has been sliding back into autocracy.

From Cambodia and the Philippines to Malaysia and Thailand, democracy is languishing. Electoral politics and civil liberties have eroded. Obedient judiciaries have hobbled opposition forces. Entire political classes are in exile or in prison. Independent media are being silenced by leaders who want only one voice heard: their own.

At the same time, external bulwarks against dictatorship have eroded. The Americans — inconsistent crusaders for human rights, who backed Southeast Asian dictators during the Cold War — have turned inward in recent years, though President Joe Biden recently urged an “alliance of democracies”. With China and Russia involved, the UN Security Council has done nothing to punish Myanmar’s generals.

“It’s a perfect storm against freedom and pluralism sweeping across Asia,” said Richard Javad Heydarian, a regional political scientist based in the Philippines. “The upshot is democracy fatigue and authoritarian nostalgia across Indonesia and the Philippines, while authoritarian consolidation has taken place elsewhere, most dramatically in Cambodia and Thailand and now even more violently in Myanmar.”

The era of regional strongmen — they are all men — has returned. And the new configuration could make it easier for China to exert its influence, though many consider the region more noteworthy for its impressive economic growth than as a proxy battleground for superpowers.

The likelihood of renewed refugee outflows from Myanmar, in the heart of Asia, could destabilise Southeast Asia. Already, thousands are crowding the border with Thailand, provoking fears that they will bring Covid-19 with them.

A scheduled special meeting on Myanmar by the Association of Southeast Asian Nations offers little hope of action. That consensus-driven group avoids delving into members’ internal affairs. Earlier negotiations among regional foreign ministers did not result in a single policy that would deter Myanmar’s coup-makers.

Besides, many of the region’s leaders have no wish to uphold democratic ideals. They have used the courts to silence their critics and met protest movements with force. 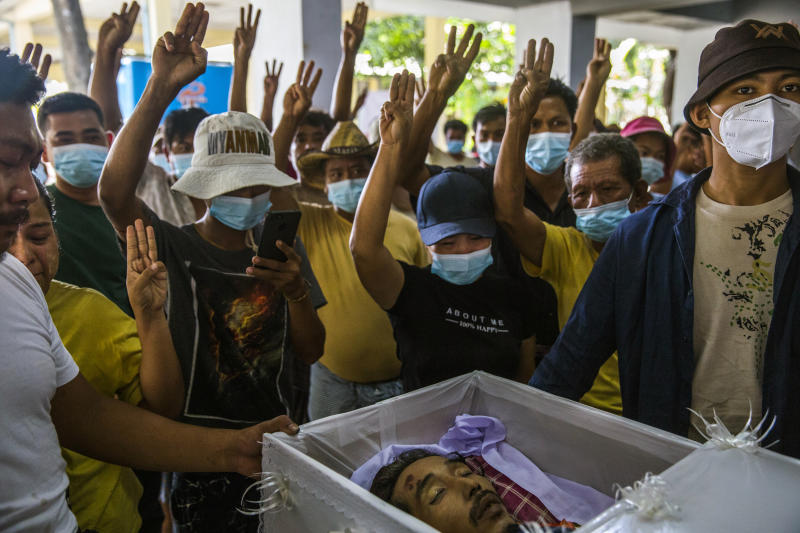 Mourners grieve on March 16, 2021, for Ko Chan Myae Lwin, 35, an engineer who was killed while protesting in Yangon, Myanmar.

But if authoritarians are looking out for one another, so, too, are protesters. In Thailand, students have stood up to a government born of a coup, using a three-fingered salute from the “Hunger Games” films to express defiance. The same gesture was adopted after the putsch in Myanmar, the leitmotif of a protest movement millions strong.

“Democratisation is taking a beating around the world,” said Thitinan Pongsudhirak, director of the Institute of Security and International Studies at Chulalongkorn University in Bangkok. “The resurgence of authoritarianism in Southeast Asia is part of that overall retreat and rollback.”

A decade ago, the region appeared to be on a different trajectory. Indonesia would soon elect its first commoner president, and Malaysia would shunt aside a governing party bloated by decades of graft and patronage. Thailand’s generals had managed to go years without a coup. Even in Vietnam, the Communist leadership was pushing forward with liberalization.

The most significant transformation seemed to be in Myanmar. The military had led the country since a 1962 coup, driving it into penury. In 2015, the generals struck a power-sharing agreement with a civilian leadership fronted by Aung San Suu Kyi, the Nobel laureate who spent 15 years under house arrest. Then-President Barack Obama went to Myanmar to sanctify the start of a peaceful political transition.

Now Suu Kyi is again locked in her villa, facing possible life imprisonment. Her supporters have been arrested and tormented. Soldiers picked up one of Suu Kyi’s followers and burned a tattoo of her face off his arm.

Much of the rest of Southeast Asia is in full-fledged democratic retreat. The leader of Thailand’s last coup, Prayut Chan-o-cha, is still the prime minister. His government has charged dozens of student protesters, some in their teens, with obscure crimes that can carry long sentences. Thai dissidents in exile have turned up dead.

After a brief interlude out of government, Malaysia’s old establishment is back in power, including people associated with one of the largest heists of state funds the world has seen in a generation. Vietnam’s crackdown on dissent is in high gear. In Cambodia, Hun Sen, Asia’s longest-ruling leader, has dismantled all opposition and set in place the makings of a family political dynasty.

President Rodrigo Duterte of the Philippines may enjoy enduring popularity, but he has presided over thousands of extrajudicial killings. He has also cozied up to China, presenting it as a more constant friend than the United States, which once colonised the Philippines.

China’s growing economic footprint in the region, coinciding with diminished US. moral leadership, has given local authoritarians cover for their repression. Beijing has readily invested in countries with poor human rights records, weakening the power of Western financial sanctions.

That Chinese aid allows countries like Cambodia to ignore Washington’s threats to tie its assistance to political reforms. And Myanmar’s neighbours, China and India included, have supplied the military with its weapons of war.

“Over the past few years, who was there to say that democracy was in free-fall in Southeast Asia, to oppose authoritarians and military coups?” said Bridget Welsh, a regional political analyst at the University of Nottingham Asia Research Institute Malaysia.

But in some places, at least, the rising oppression has hardened dissidents’ resolve. Protesters in Thailand, who gathered by the hundreds of thousands last year, have resumed their rallies, even though most of their young leaders are now in prison. 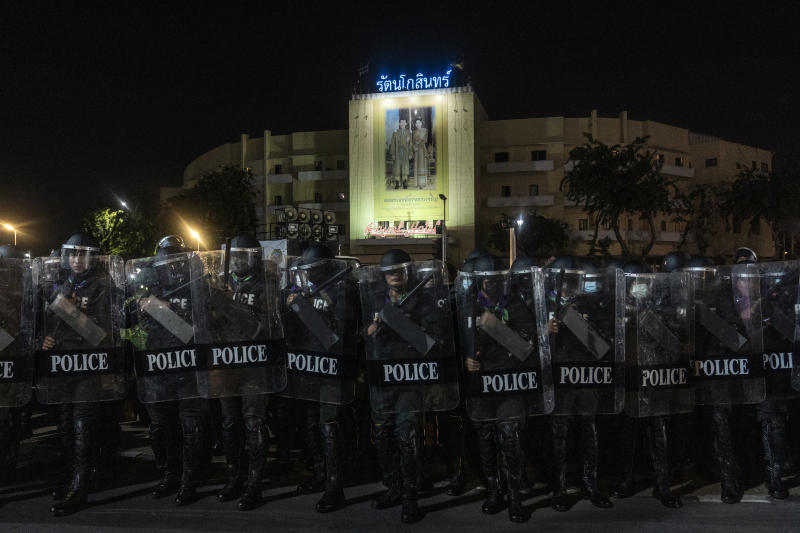 As the riot police fired rubber bullets near the Grand Palace in Bangkok last month, Thip Tarranitikul said she wanted to erase the military from politics.

Power from the barrel of the gun cannot buy popularity. In Myanmar, Senior Gen. Min Aung Hlaing, the army chief, appears to have underestimated the people’s commitment to democratic change. Millions have marched against him. Millions have also joined nationwide strikes meant to stop his government from functioning.

There is little reason to believe the military will back down, given its decades in power. Over the past two months, it has killed more than 700 civilians, according to a monitoring group. Thousands have been arrested, including medics, reporters, a model, a comedian and a beauty blogger.

But the resistance has demographics on its side.

Southeast Asia may be ruled by old men, but more than half its population is under 30. Myanmar’s reforms over the past decade benefited young people who eagerly connected to the world. In Thailand, this same cohort is confronting the old hierarchies of military and monarchy.

Regional defenders of democracy, including the besieged dissidents of nearby Hong Kong, have formed what they call the Milk Tea Alliance online, referring to a shared affinity for the sweet brew. (Twitter recently gave the movement its own emoji.) On encrypted apps, they trade tips for protecting themselves from tear gas and bullets. They have also bonded over the disproportionate impact the pandemic has had on young workers, in countries where income inequality is growing wider.

“The youth of Southeast Asia, these young digital natives, they inherently despise authoritarianism because it doesn’t jibe with their democratic lifestyle. They aren’t going to give up fighting back,” Mr Thitinan said. “That’s why, as bad as things may seem now, authoritarianism in the region is not a permanent condition.”

In Yangon, the largest city in Myanmar, protesters have faced the military’s rifles with a sense of an existential mission.

“I’m not afraid to die,” said Nay Myo Htet, a high school student manning one of the barricades built to defend neighborhoods. “I want a better life for the future generation.” 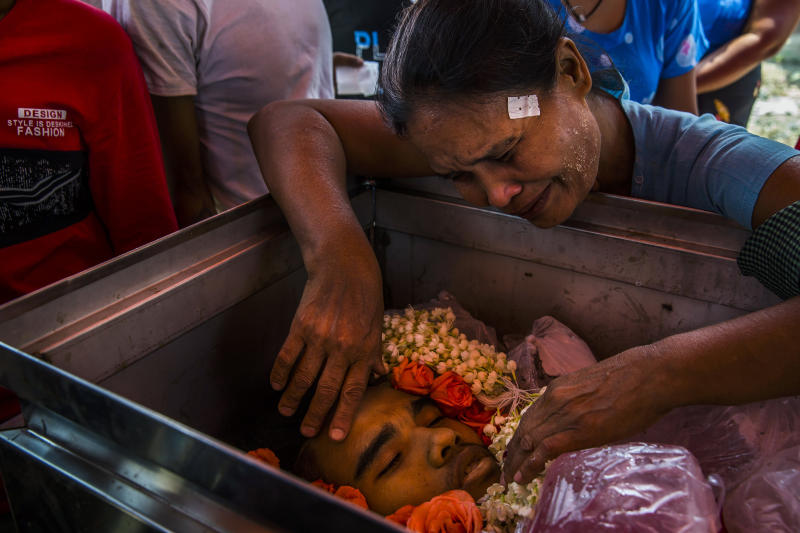 The mother of Aung Zin Myint, 20, mourns over the body of her son, a student shot by security forces earlier in the morning in Dala, Myanmar, on March 27, 2021.

Boom or bust as Spain, Italy get biggest slice of EU fund