Police officers stand guard during an anti-lockdown and anti-vaccine protest outside Downing Street in London on June 14. (Reuters Photo)

LONDON: At the start of the coronavirus pandemic in March last year, Boris Johnson stood gravely in front of television cameras and told Britain the harsh reality. “Many more families are going to lose loved ones before their time,” he said.

If that was the moment that brought home the gravity of the unfolding crisis, next month’s planned lifting of coronavirus restrictions will require the UK prime minister to level with the public again.

More loss of life is inevitable, and the issue is just how many more deaths will ensue as collateral damage to rescue the economy.

After inoculating a larger proportion of people than any other major economy, Britain is emerging as a test case in Europe as it attempts to draw a line under Covid-19. Levels of infections are now back to their highest since February and the pound is taking a hit on concern a recovery may be slipping further into the future.

Johnson described unlocking the economy on July 19 as a “terminus” after he announced a four-week delay because of the surge in cases. That involves the next pivotal risk calculation as ministers and officials pore over data for evidence that the vaccines are overwhelmingly breaking the link between the virus and serious illness.

But they know infections will not disappear, and nor will the reticence among portions of the public to return to offices, pubs and nightlife.

Health Secretary Matt Hancock told Parliament on Wednesday that the aim is now to live with the virus like influenza, as the hospitality industry and some members of the governing Conservatives call for a return to normality two weeks sooner.

“The question is what level of infections and hospitalisations are we prepared to tolerate?” said Lawrence Young, a virologist at Warwick Medical School.

The government says waiting another four weeks will prevent adding thousands to what is already Europe’s highest death toll by allowing more people to get their second vaccine dose.

Data show that is crucial in protecting against the Delta variant that was first detected in India and now accounts for 99% of British cases. Two-thirds of UK adults will be fully vaccinated by July 19, according to the government.

While Public Health England figures reported on Thursday showed infections were increasing in all age groups, case rates were highest in people aged 20 to 29, many of whom haven’t yet been vaccinated. All people over age 18 are now beginning to be offered shots. (story continues below) 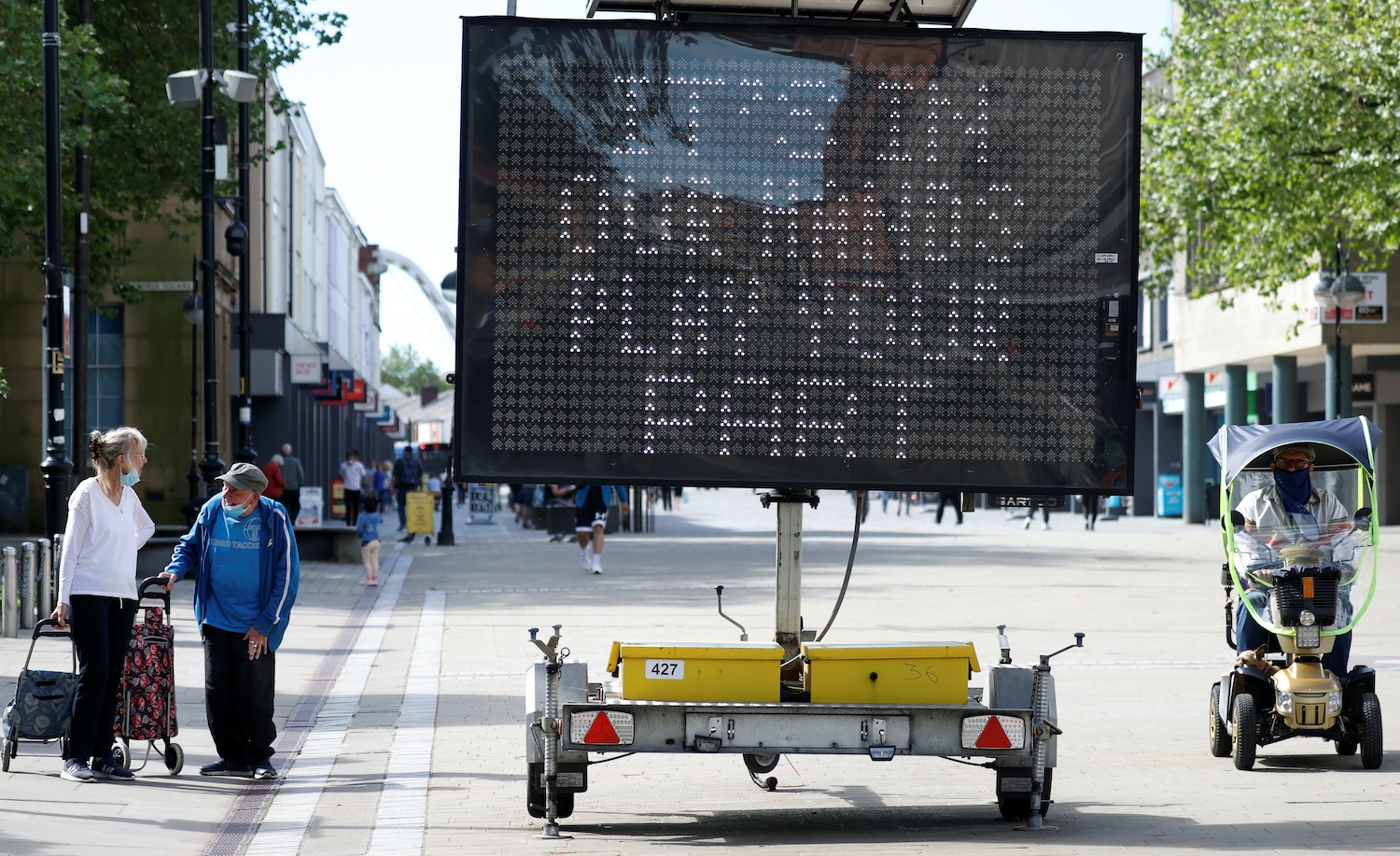 People walk past an information board in Bolton, England on June 16. (Reuters Photo)

The UK economy is about 5% smaller than it was pre-Covid and some pandemic wounds could turn into scars. Nightclubs remain closed, restaurants and pubs struggle to break even with limits on capacity, and airlines are suffering from more restrictions on overseas travel than the rest of Europe.

The delay to reopening could cost the hospitality sector £3 billion (US$4.1 billion) in sales and have an impact on bookings throughout the summer and beyond, according to Kate Nicholls, chief executive of the industry’s main trade association.

Luke Johnson, chairman of Risk Capital Partners, accused the government of “neurotic risk aversion”. The private equity firm has invested in a number of restaurant chains.

“So many of the public remain irrationally frightened — and investors and business owners suffer more losses and uncertainty,” he said. “A culture of safetyism means jobs will go and companies fail.”

Indeed, Britain looks more out of sync with other European nations. The Delta variant is “poised to take hold” across the continent, World Health Organization senior official Hans Kluge warned last week. Yet Germany and France are easing their Covid rules this summer, and on Friday the European Union lifted travel restrictions for US residents.

The travel industry has hit out at British government measures to force passengers returning from most countries to quarantine regardless of vaccination status. On Friday, Italy introduced a five-day isolation for travellers coming to the country from Britain because of the jump in cases.

What Johnson has to balance is the future death toll from coronavirus and the harm caused by 15 months of restrictions including undetected cancers, deteriorating mental health, business closures and job losses.

Many people are now too “scared” to do the things they used to do, according to Jamie Jenkins, a former health analyst at the Office for National Statistics. The government should instigate a national debate about the risks before July 19 so the public are prepared, he said.

“We’re going to have accept a certain level of risk and we should be having that debate now,” said Jenkins. “We’re never going to get to zero deaths.”

A poll by JL Partners for the Daily Mail newspaper in April found that 65% of respondents would back mostly lifting restrictions if the number of Covid deaths was the same as those from influenza.

There were just under 4,000 fatalities in England in the 2018-19 flu season, according to official data. Covid also is both more infectious and more deadly.

There are also concerns over vaccine supplies. Nadhim Zahawi, the minister responsible for the rollout, warned on June 11 that Pfizer-BioNTech shots would be “tight” over the next few weeks. Under-40s have been advised against taking AstraZeneca vaccine due to concerns about very rare blood clots.

Some members of the governing Conservatives are pushing the government to move faster, regardless of how far the vaccination programme has managed to get a grip on the virus.

Former minister Steve Baker warned that Britain would be “a hollow and haunted country after all the affected businesses have collapsed”.

As House of Commons leader Jacob Rees-Mogg put it in a ConservativeHome podcast: “You can’t run society just to stop the hospitals being full.”

A woman holds a placard during an anti-lockdown and anti-vaccine protest near the Houses of Parliament in London on June 14. (Reuters Photo)

HONG KONG: A Hong Kong court will lay down a marker on the city's future legal landscape Tuesday when it delivers its verdict in the first trial using a national security law imposed by China to stamp out dissent.

US, China leave room to talk after contentious meetings