An eruption occurs at the underwater volcano off Tonga on Jan 14, 2022, in this screen grab obtained from a social media video.

New satellite images released after the dramatic eruption of the Hunga Tonga-Hunga Ha’apai volcano on Saturday evening have revealed early indications of the damage inflicted on the nearby islands and the Tongan capital of Nukuʻalofa.

In photos published by Maxar on Tuesday, taken first in April 2021 and then again after the eruption, Nukuʻalofa is shown covered in a carpet of dark brown ash, while images from the capital’s port appear to show tsunami damage. The volcano is located about 64 kilometres (40 miles) north of the capital.

Meanwhile the island at the heart of the eruption has been almost entirely submerged, according to the satellite images, with just small spits of land remaining above water. The ash cloud from the seismic event rose up to 63,000 feet (19,000 metres) high, while the shockwave could be felt as far as Alaska, according to AP.

At least two people, including a British national, are believed to have died in eruption, according to the New Zealand Foreign Ministry. However the true extent of the damage is still unknown, with communications to the island disrupted as a result of damage to an undersea Internet cable.

Efforts were underway in Nukuʻalofa on Tuesday to clear the airport runways, allowing additional humanitarian supplies to be flown in, Australian Foreign Minister Marise Payne said.

Payne told local radio that both Australia and New Zealand were providing emergency drinking water and water purification equipment to Tonga due to contamination of the island’s drinking supply by the ash cloud. 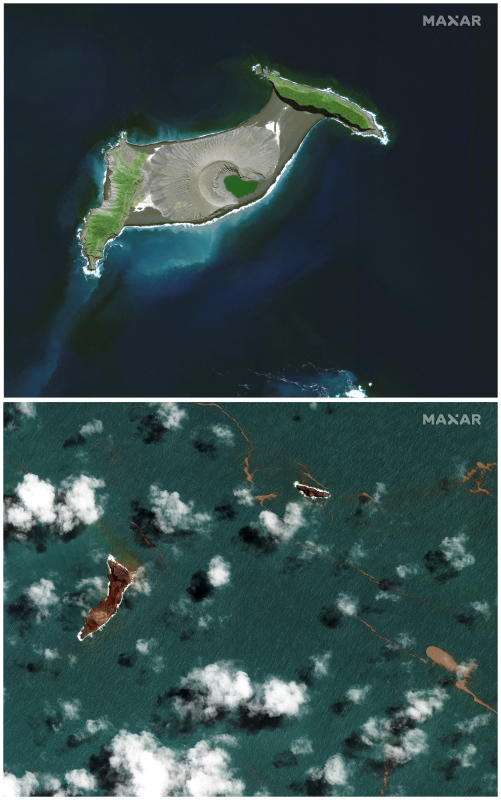 A combination of satellite images shows the Hunga Tonga-Hunga Ha'apai volcano before its main eruption on April 10 last year (top) and the same area on Tuesday in Hunga-Tonga-Hunga-Ha'apai, Tonga.