Xi presides over lavish ceremony in Beijing stadium, US broadcaster pulls no punches

Flag bearers Karen Chanloung and Nicola Zanon lead Team Thailand athletes and coaches into the stadium during the opening ceremony for the Beijing Winter Olympics on Friday evening. (Reuters Photo)

BEIJING: President Xi Jinping declared the Beijing Winter Olympics open on Friday as China tried to turn the page on a build-up overshadowed by human rights concerns, Covid and a US-led diplomatic boycott.

Fireworks exploded over the "Bird's Nest" as the lattice-shaped stadium took centre stage, just as it did at the 2008 Games, as Beijing became the first city to host both a Summer and Winter Olympics.

Xi, under whose rule China has adopted a more muscular attitude internationally compared to 14 years ago, was given a rapturous welcome by the socially distanced crowd wearing face masks, for what his ruling Communist Party hopes will be a soft-power triumph.

The snowflake-themed ceremony got off to a solemn start when eight soldiers slow-marched with the Chinese flag, before the national anthem rang out into the cold night air.

"I declare the 24th Beijing Winter Olympics open," said Xi, who was joined by world leaders including Russian counterpart Vladimir Putin, with whom he held talks earlier in the day.

The United States, Britain, Canada and Australia are among countries staging a diplomatic boycott of the Games over China’s rights record, particularly the fate of the Muslim Uyghur minority in Xinjiang.

Their athletes will still compete at the Games, which run until Feb 20 and are taking place inside a vast “closed loop” designed to thwart the coronavirus. So far there have been more than 300 Covid cases in the bubble, among them an unknown number of athletes.

Some spectators were present at the opening ceremony at the 90,000-capacity “Bird’s Nest” but, like sports events at the Games, tickets were not sold to the general public because of the pandemic. The stadium was about one-third full.

The show was the mastermind of acclaimed Chinese film director Zhang Yimou, who was also behind the 2008 extravaganza.

Zhang promised a “totally innovative” ceremony but conceded that the pandemic and freezing weather would limit its scale compared to the Summer Games, which featured 15,000 performers.

The extravaganza in the Beijing National Stadium showcased the Chinese lunar calendar’s seasons and celebrated the new year with a cast consisting of ordinary citizens. The entire show was staged on top of a giant LED-screen floor.

But China’s assertion that these will be a “green Games” has been challenged by some experts because they are taking place in one of the driest places in the country and on almost entirely man-made snow.

There are other concerns, including warnings from some Western nations about surveillance of their athletes and what will happen to them if they make anti-China comments or other displays of protest against local authorities.

The US television network NBC, which has paid $7.65 billion to extend its exclusive US broadcasting rights for the Summer and Winter Olympics through 2032, began its coverage on Friday with hosts and experts on air pointedly discussing China’s alleged rights violations.

NBC featured China experts — speaking from the broadcast site in the stadium in Beijing — who described in stark terms the status of Uyghurs and other Muslim minority groups in China’s northwestern region of Xinjiang, among other controversies.

The narrator of a pre-recorded NBC video segment on Thursday detailed “other concerns that have also contributed to this latest flashpoint between the US and China,” including the escalation of crackdowns on pro-democracy sentiment in Hong Kong.

In a presentation to reporters last month, NBC responded to critics who expressed concern that it would present a sanitised version of events. It said its broadcast coverage of the Games would include the “geopolitical context” of China as the host nation.

Athletes from many countries have been advised by their governments to be careful about what they say while in China, but that has not stopped some from expressing their views.

Gus Kenworthy, a British freestyle skier, said he would not be silenced and called China “not well suited” to be hosts.

“In my opinion I don’t think any country should be allowed to host the Games if they have appalling human rights stances,” he told the BBC.

Unlike the huge celebrations and outpouring of national pride that greeted the 2008 opening ceremony, enthusiasm for the 2022 Games has been noticeably more sober this time among the locals.

Covid restrictions mean that most will watch the show from home.

Those lucky enough to be there in person were told to wear a mask at all times and sit several seats apart.

Speaking on the streets of the capital, Yin Rui, 31, said she was eager to get settled in front of her television.

“Even if they are at home people will cheer for the Olympics,” she told AFP, adding that “enthusiasm in everyone’s hearts remain” for the Games — even though they will take place behind high fences and with the public mostly shut out.

Thailand has four athletes who qualified to compete in Beijing: Nicola Zanon and Mida Jaiman in Alpine skiing and Mark Chanloung and Karen Chanloung in cross-country skiing. 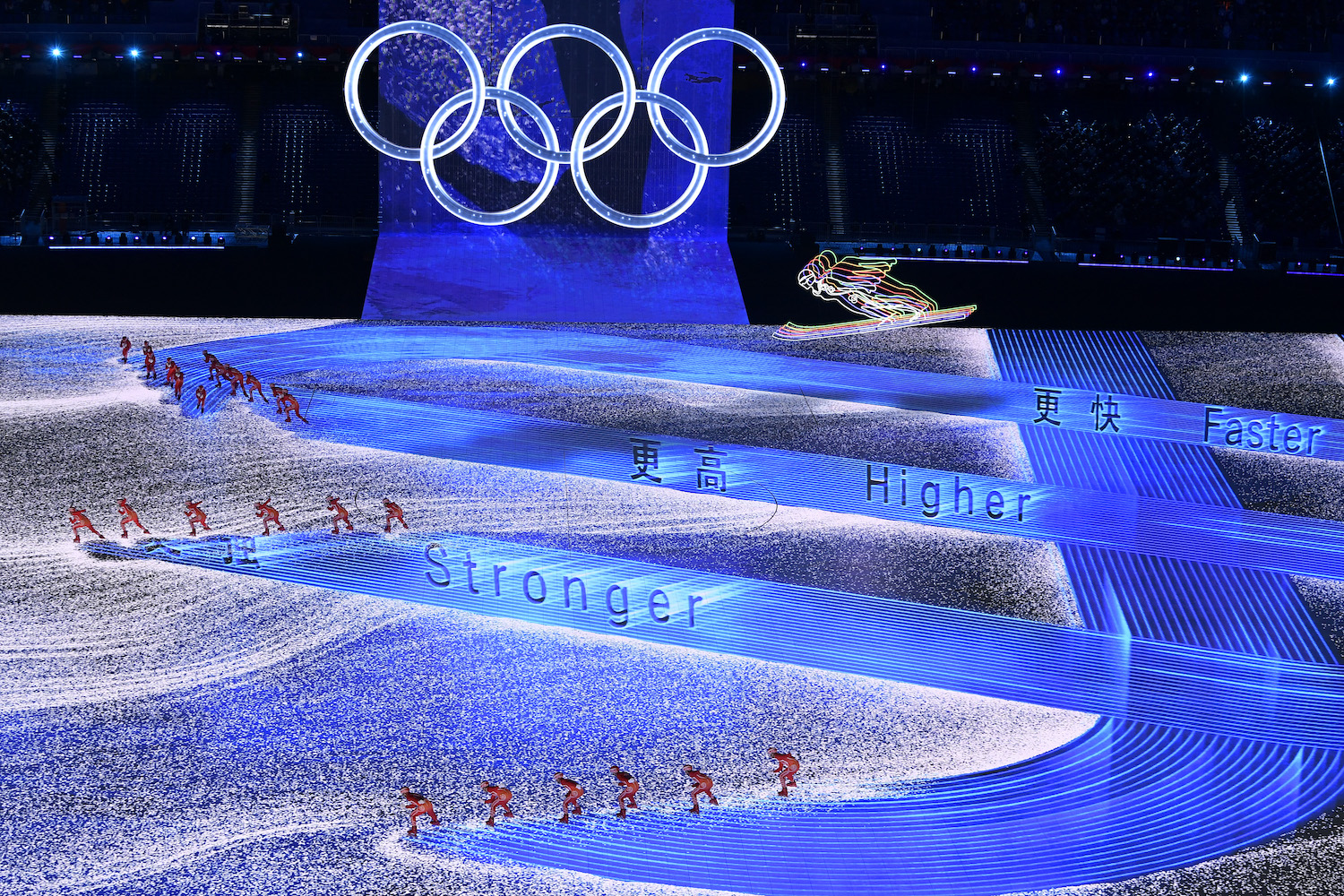 Performers are pictured beneath the Olympic Rings during the opening ceremony at the “Bird’s Nest” stadium in Beijing. (Reuters Photo)