The Ambassador Bridge, North America’s busiest land border crossing, had no traffic flowing for the fifth straight day on Saturday morning. About 15 trucks, cars and pickup vans blocked traffic in both directions, choking the supply chain for Detroit’s carmakers.

“We urge all demonstrators to act lawfully & peacefully,” Windsor Police said in a tweet, asking commuters to avoid the area.

Police in black uniforms with yellow vests were seen moving behind the protesters’ cars on the bridge. Protesters have thinned from about 200 blocking the bridge on Friday night.

Canada has been rocked by protests against the government’s strict pandemic measures, including vaccine mandates, which have entered a third week.

The days-long blockade of the bridge has paralysed a key North American trade route, with Trudeau looking to resolve a crisis that has threatened to morph into a populist movement.

The protests began 16 days ago in the national capital Ottawa — where the streets have been clogged with hundreds of big rigs for a fortnight — and copycat demonstrations as far away as France and New Zealand have now arisen.

Windsor Mayor Drew Dilkens said the court order required the truckers to clear roads by 7pm Friday local time (7am Saturday Thailand time) but their numbers continued to swell as the deadline came and went.

Two other border crossings are also blocked: the first, at Emerson, connects the province of Manitoba to North Dakota, while the second is farther west in Coutts, Alberta, bordering Montana.

Upping the stakes, US President Joe Biden on Friday reiterated his “concern” to Trudeau, telling him the blockades were having serious effects on US businesses.

The actions have already had significant economic impact, with automakers forced to cut production on both sides of the border, triggering fears it could undermine Canada’s recovery from the coronavirus pandemic.

The Ambassador Bridge is used daily by more than 40,000 people, along with trucks carrying $323 million worth of goods on average — about one-quarter of all Canada-US trade.

Authorities are under increasing pressure to crack down on the demonstrations that have paralysed Ottawa.

Trudeau said all options were “on the table” for ending the protests. But speaking to reporters in the capital, he reiterated that calling in the military was a distant final resort, and “something to avoid having to do at all costs”.

“This unlawful activity has to end and it will end,” the prime minister said, adding that it was up to police to “enforce the law and protect public order.”

Ottawa police have said they are “not in a position” to end the demonstration without reinforcements.

Doug Ford, the premier of Ontario province — which includes both Ottawa and Windsor — announced a state of emergency on Friday, threatening steep fines of up to C$100,000 (US$80,000) and jail unless protesters end their “illegal occupation”.

Ford said he understood “frustrations have reached a boiling point for many Canadians” but warned “this is no longer a protest”.

He has accused the truckers of “targeting our lifeline for food, fuel and goods across our borders” while “trying to force a political agenda through disruption, intimidation, and chaos”.

The self-styled “Freedom Convoy” began in the country’s west in anger at requirements that truckers either be vaccinated or test and isolate when crossing the US-Canada border — but has morphed into a broader protest against pandemic health rules and Trudeau’s government. (Story continues below) 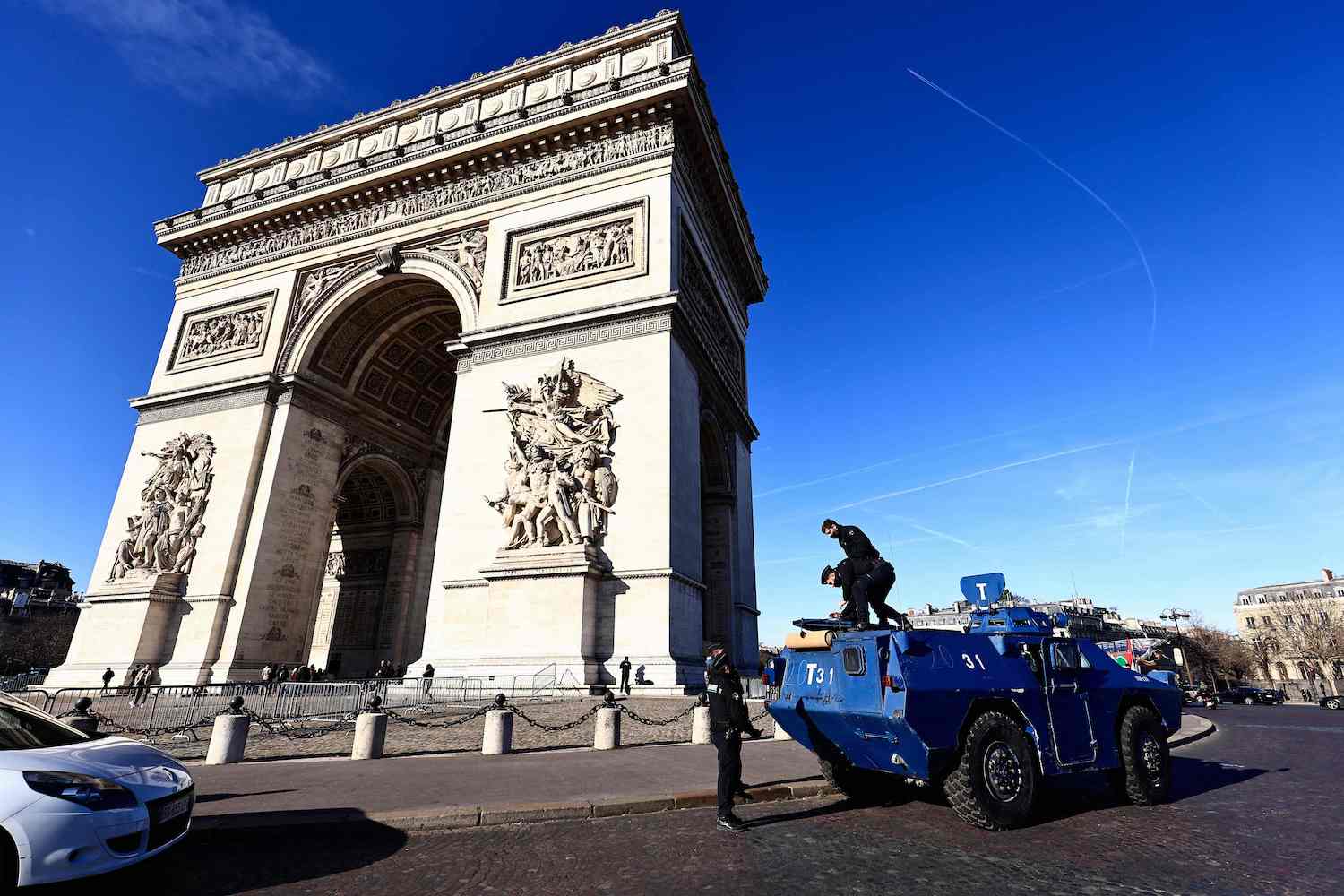 French gendarmes stand next to an armoured vehicle parked at the Arc de Triomphe in Paris, where authorities are trying to prevent protesters from the "Convoi des Libertes" from entering the capital on Saturday. (AFP Photo)

Inspired by the Canadian truckers, thousands of protesters encamped on the outskirts of Paris early Saturday resumed their way to the French capital in convoys of vehicles, defying a ban by authorities who are determined to prevent a blockade of the city.

But the police acted quickly, issuing 283 fines for “participation in an unauthorised protest” by mid-morning.

The demonstrators included opponents of Covid-19 vaccinations as well as people angry at fast-rising energy prices — in an echo of the “yellow vest” grievances that sparked widespread protests in 2018 and 2019.

Nearly 7,200 police and gendarmes “are being deployed over the next three days to enforce the ban on vehicle convoys”, Paris police headquarters said.

Just two months ahead of presidential elections and with the government desperate to avoid a repeat of the “yellow vest” riots that shook the capital, President Emmanuel Macron said Friday he understood the “fatigue” linked to the Covid-19 pandemic.

“This fatigue also leads to anger. I understand it and I respect it. But I call for the utmost calm,” he told the newspaper Ouest-France.

In New Zealand, meanwhile, a makeshift protest camp has sprung up in Wellington outside New Zealand’s parliament, the scene of violent clashes earlier this week as police sought to clear anti-vaccine demonstrators.

Ottawa was bracing for another influx of protesters on Saturday, with a stage set up in front of parliament and crowds growing larger than they have been in recent days, an AFP journalist said.

On Thursday evening, Ford’s government separately obtained a court order barring anyone from tapping the millions of dollars raised by the convoy through the platform GiveSendGo after their fundraising efforts on GoFundMe were terminated. The site said the campaign violated its terms of service.

But sitting across from Ottawa’s Gothic revival parliament buildings, Matt Lehner said he was “not worried”.

“We are standing up for what we believe in, we are not breaking any laws,” he told AFP, a Canadian flag hanging from the end of his hockey stick as he waited for the “thousands” of Canadians who will join the protests over the weekend. 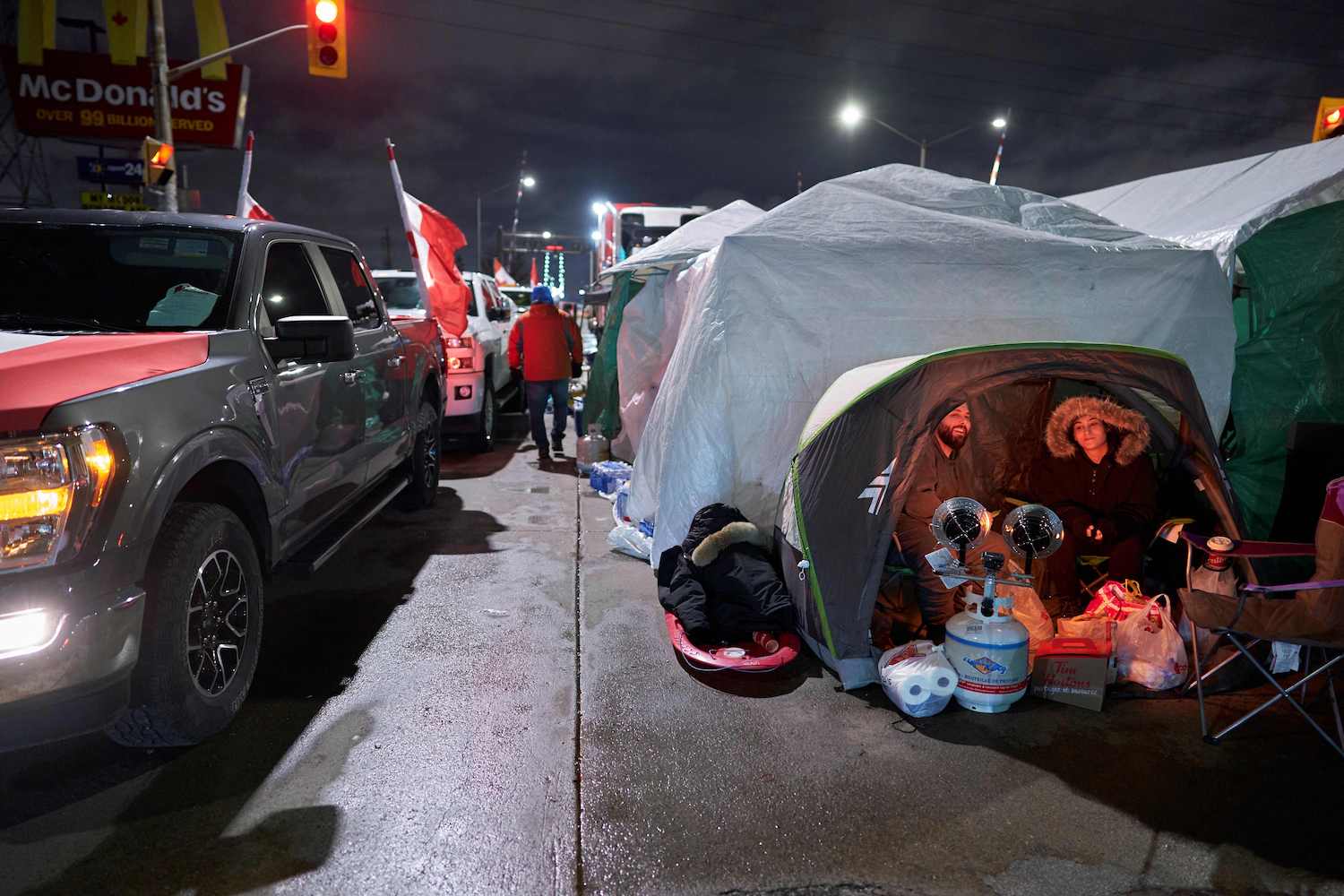 Protesters keep warm with a heater in a tent in front of the Ambassador Bridge border crossing in Windsor, Ontario on Friday night. (AFP Photo)

Hadis, Minoo and Ghazaleh: the women victims of Iran's crackdown