This undated photo provided by the National Oceanic and Atmospheric Administration (NOAA) in May 2018 shows aurora australis near the South Pole Atmospheric Research Observatory in Antarctica. (Photo: NOAA)

A heat wave in Antarctica earlier this month was so extreme that it may be the largest temperature increase above normal ever recorded, according to Robert Rohde, lead scientist at the non-profit Berkeley Earth, who analysed global records.

The temperature at Concordia research station, a European outpost in East Antarctica, measured almost 70 degrees Fahrenheit (38.5 degrees Celsius) hotter than normal on March 18, reaching a high of 11C. (As warm as that is for the region, it is still below freezing.) Though this is not a category weather services track, Rohde said it may be the biggest margin ever.

Temperature record-keeping in Antarctica by satellite goes back only to the early 1980s — not a huge amount of time, with sparse data, compared with warmer and more populous regions to the north. This short record, combined with strong natural variability normal for the area, makes it premature to characterise the role global warming may have played in the event.

“It's difficult to say anything other than I'd be surprised if there wasn't a climate change signal,” said Friederike Otto, senior lecturer in climate science at Imperial College London, and head of World Weather Attribution, which scrutinizes extreme events for human influence. “But I also don't expect it to be as clear-cut and overwhelming as in the Canada case last year.”

In June, an unprecedented heat wave over the western temperate United States-Canada border pushed temperatures into the triple digits and held them there for days. Lytton, British Columbia, broke Canada's 84-year-old heat record three days in a row, before it was consumed by wildfire. The heat wave in Antarctica was at least as competitive in shock value.

“It gives the June 2021 Pacific Northwest heat wave a run for its money,” said Peter Neff, assistant research professor in glaciology at the University of Minnesota. “I don't think the penguins minded too much about a little heat like this,” he said, but if such a jump occurred in places where people live, “that would have been super dangerous.'

Jonathan Wille, an Antarctic meteorologist and climatologist at Grenoble Alpes University, also likened the enormity of the heat wave to the June 2021 event in that it 'was completely unprecedented and redefined what we thought was possible from the climate system,' he said. He said he agreed with the Rohde’s analysis.

The heat rode in on an atmospheric river, a jet of wet, warm air that glides through the sky between high and low pressure systems. The phenomenon dropped an enormous amount of snow, which can help protect the area against future heat waves.

The heat likely triggered the collapse of the Conger ice shelf, which had not been a top-line worry for many scientists but caught their attention when it disintegrated in two weeks. Scientists closely follow events in West Antarctica, where fragile ice shelves are holding back glaciers that could over time raise sea levels by catastrophic levels. The Conger, by contrast, sat at the end of relatively flat bedrock, with little opportunity for massive amounts of ice behind it to slide toward the sea.

“I don't want people to get scared too much about this event. This ice shelf was in rough shape,” Neff said, adding it had been there for thousands of years. “Very few people really even gave the Conger ice shelf the time of day until it collapsed.” 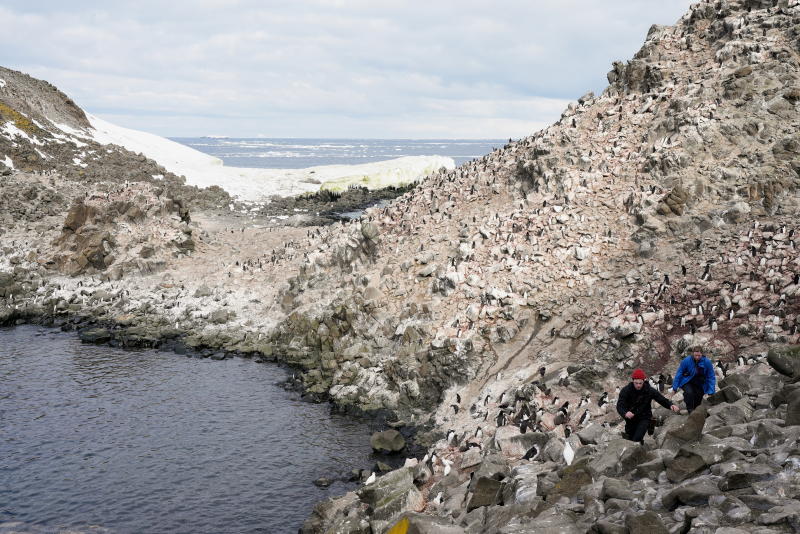 Scientists walk among a colony of Adelie penguins while investigating the impact of climate change on Antarctica's penguin populations, on the eastern side of the Antarctic Peninsula, Antarctica, Jan 16, 2022. (Photo: Reuters)