President Vladimir Putin on Thursday ordered the Russian military to cancel plans to storm the Azovstal plant in the Ukrainian port city of Mariupol and said he wanted it to continue to be hermetically blockaded instead.

Putin gave the order to Defence Minister Sergei Shoigu, who had previously told Putin that more than 2,000 Ukrainian fighters were still holed up in the vast plant, which has a large underground component to it.

"I consider the proposed storming of the industrial zone unnecessary," Putin told Shoigu in a televised meeting at the Kremlin. "I order you to cancel it."

Putin said his decision not to storm the Azovstal plant was motivated by the desire to safeguard the lives of Russian soldiers.

"There is no need to climb into these catacombs and crawl underground through these industrial facilities," he said. "Block off this industrial area so that a fly cannot not pass through."

Putin also called on the remaining Ukrainian fighters in Azovstal who had not yet surrendered, saying Russia would treat them with respect and would provide medical assistance to those injured.

Russia sent tens of thousands of troops into Ukraine on Feb 24 in what it called a special operation to degrade its southern neighbour's military capabilities and root out people it called dangerous nationalists.

Ukrainian forces have mounted stiff resistance and the West has imposed sweeping sanctions on Russia in an effort to force it to withdraw its forces.

The Russian president hailed Russia's "liberation" of Mariupol after Shoigu told him Moscow controlled the Ukrainian port city apart from the steel plant.

"Block off this industrial area so that not even a fly can escape," Putin said in the televised meeting, adding it would be "impractical" to storm the huge industrial area, where more than 2,000 Ukrainian servicemen remain according to Shoigu. 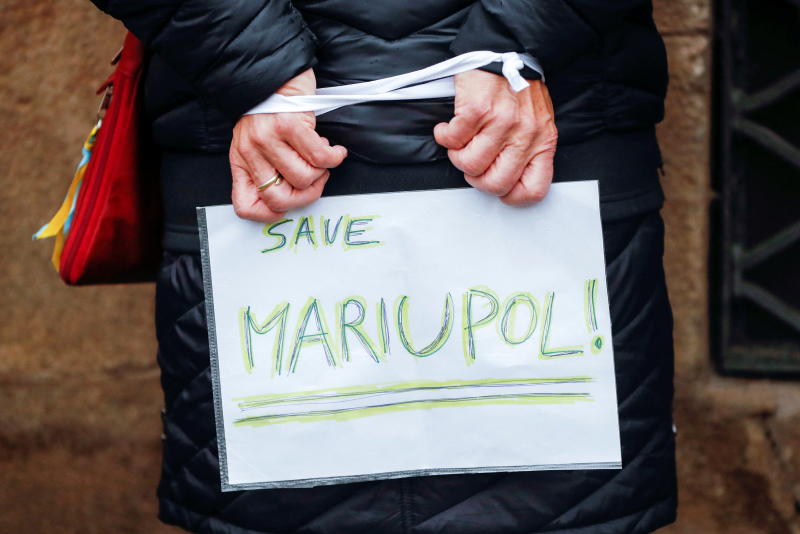 A woman with a sign reading "Save Mariupol" and her hands tied on her back attends a rally against Russia's invasion of Ukraine, in Prague, Czech Republic, on Wednesday. (Photo: Reuters)