These handout photos taken on Sunday shows a police cordon around the carcasses of two out of three critically endangered Sumatran tigers found dead in snares in two nearby locations near Sri Mulya village in Peunaron, Indonesia's easternmost Aceh province. (Photo by Handout / INDONESIAN POLICE / AFP)

Three critically endangered Sumatran tigers were found dead in western Indonesia on Sunday after being ensnared by traps, police said, dealing another blow to the species' rapidly declining population.

Rampant deforestation has reduced the tigers' natural habitat and increasing conflict with humans has left only several hundred of the endangered species remaining in the wild, according to estimates.

Two of the dead tigers were first found by local conservationists in Aceh -- which sits on the the northern tip of Sumatra island -- before police were alerted, conservation officials said.

Authorities found the two intact tiger carcasses next to each other with their feet ensnared by steel slings at a palm oil plantation in East Aceh district, a police statement said.

A few hours later, police found a third dead tiger about 500 metres (1,600 feet) away from where the other two tigers were discovered. Its feet were also ensnared by a sling and the body had started to rot.

"Our initial suspicion is that the tigers died after being caught by a boar trap, because when we found them their feet were ensnared by thick steel sling," local police chief Hendra Sukmana said in a statement late on Sunday. 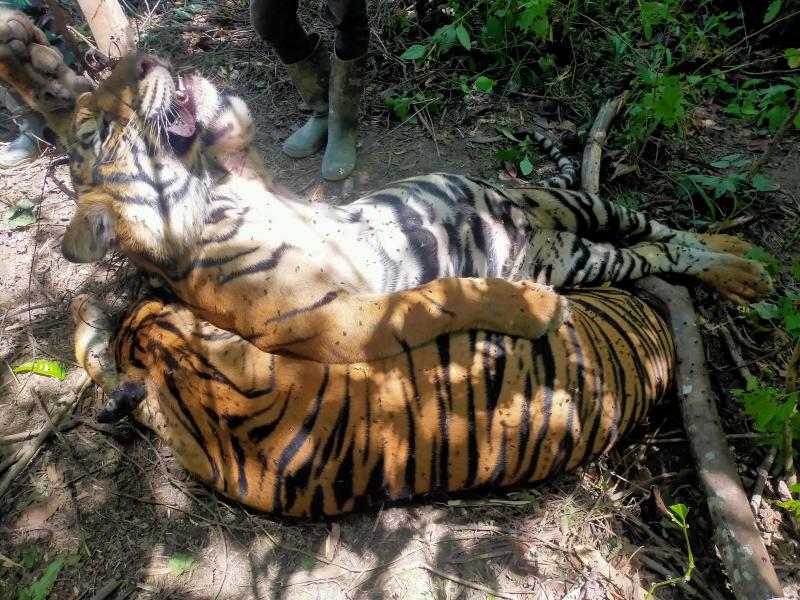 Officials will conduct autopsies to determine the causes of the tigers' deaths.

"We strongly condemn this incident... if the tests reveal there's intentional action that caused the deaths of these protected species, we will take strict action," head of Aceh conservation agency Agus Arianto told AFP on Monday.

Sumatran tigers are considered critically endangered by the International Union for Conservation of Nature, with fewer than 400 believed to remain in the wild.

Up to 10 tigers are killed yearly, according to the Indonesian forestry ministry.

Tigers are also targeted by poachers for their body parts that are widely used in traditional medicine -- particularly in China -- despite overwhelming scientific evidence that they have no beneficial value.