A vial containing bear bile for sale is displayed in Thai Nguyen province. Vietnamese police arrested a bear owner for the first time after netting a record haul of hundreds of bile bottles in Hanoi, a wildlife protection organisation said June 3. (Photo: AFP)

HANOI: Vietnamese police have arrested a bear owner for the first time after netting a record haul of hundreds of bottles of bear bile, a wildlife protection organisation said on Friday.

The communist country is a major hub for the illegal trade in wild animals and bears are kept to drain the bile from their gallbladders for use in traditional medicine.

Authorities outlawed bile extraction in Vietnam in 2005, but bear farms were allowed to keep the animals they already had. Those convicted of extracting the bile can face prison sentences of up to five years.

Hanoi police arrested a man from suburban Phuc Tho district, a prime location for bear farms, while he was carrying 350 bottles of bile fluid late last week. It's believed to be Vietnam's biggest ever seizure of bear bile, the Education for Nature from Hanoi said.

"This is the first time a bear owner in Hanoi has been arrested and examined for criminal responsibility for the illegal transport and trade of bear bile," Education for Nature deputy head Bui Thi Ha said in a statement.

The organisation said there were close to 150 caged bears kept at properties in Hanoi which represented half the total nationwide.

The arrested man owned seven bears and was caught transporting the bottles in his car but it is not clear where the bear bile was destined. Vietnamese and Chinese believe bear bile can be used as a cure for bruises, cancer or prolonging longevity.

Most farmed bears are kept in tiny cages, sometimes so small that the bears are unable to turn around or stand on all fours, according to AnimalsAsia, a group  "devoted to ending bear bile farming and improving the welfare of animals across Asia". (continues below) 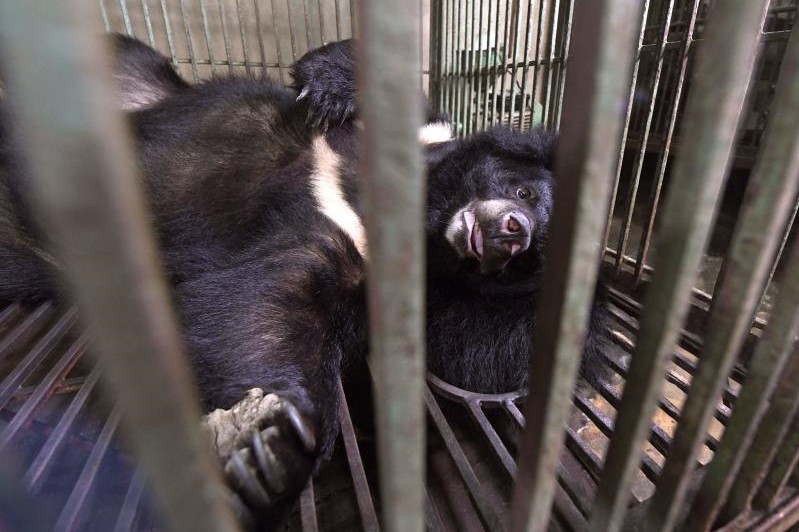 A caged bear is seen during a rescue operation from a facility where bear bile is extracted in Thai Nguyen province in April 2018. (Photo: AFP)

Bear's bile is extracted using various invasive techniques, all of which cause severe suffering, pain and infection.

"The method claimed to be the most 'humane' by bile farmers, is 'free-drip' method, where bears undergo surgery to create a permanent open passage from their gallbladder through their abdomen. The surgery is crude, unhygienic... and results in many of the bears dying from infections or other complications, and agony for those that do survive," according to a report on the website.