Asean: No Myanmar junta at summits unless peace progress
World

Asean: No Myanmar junta at summits unless peace progress

Discussions among Asean ministers over Taiwan tensions were 'lively'

PHNOM PENH: Cambodia's foreign minister on Saturday said the Southeast Asian regional bloc had decided that Myanmar's ruling generals would remain barred from any of its meetings until they show progress on a peace plan.

Prak Sokhonn, a special envoy on Myanmar and chair of this week's Association of Southeast Asian Nations (Asean) meetings, told a news conference the junta "must act in a way that shows progress is made then we will be able to act on a decision to show progress."

If more executions happen in Myanmar, things will have to be reconsidered, and the bloc agrees on that, he said.

On Friday, Southeast Asian ministers condemned the lack of progress on a crisis resolution plan for coup-hit Myanmar, demanding the junta act before a regional summit later this year. 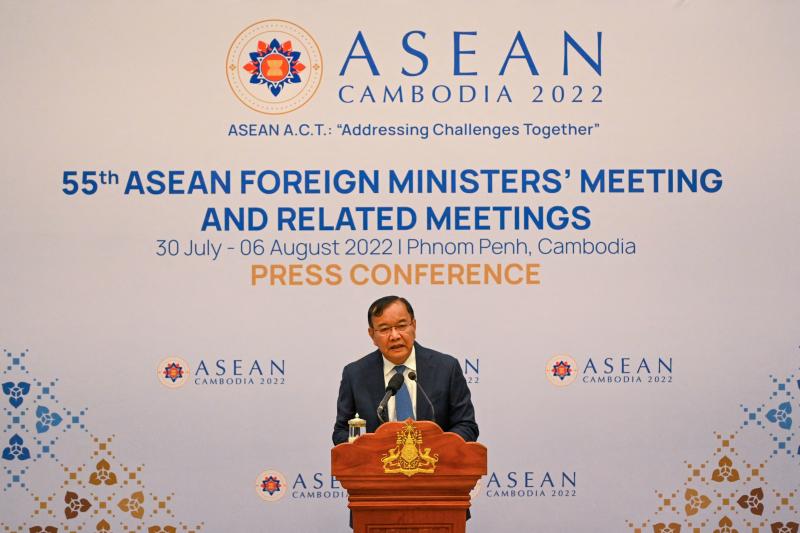 Myanmar has been in chaos since a putsch in February last year, and the death toll from the military's brutal crackdown on dissent has passed 2,100, according to a local monitoring group.

Anger is growing among some Asean members at the generals' stonewalling, particularly after the execution last month of four prisoners -- including two prominent pro-democracy figures.

The 10-member bloc -- spearheading so far fruitless efforts to resolve the turmoil -- issued a joint statement after foreign minister talks in Phnom Penh.

The ministers said they were "deeply disappointed by the limited progress in and lack of commitment of the Naypyidaw authorities to the timely and complete implementation of the five-point consensus".

And in a veiled warning to Myanmar's junta, the statement -- referencing Article 20 of the Asean charter -- noted the leaders' meeting later this year could still take action over "non-compliance".

Asean decisions are usually taken by consensus, but Article 20 allows a summit to override this principle.

Myanmar's top diplomat, Wunna Maung Lwin, was not invited to Phnom Penh and was also left out of a foreign ministers' retreat in February, while junta leader Min Aung Hlaing was snubbed at a leaders summit last year.

Earlier in the week, Malaysia -- which has led calls for tougher action -- indicated that Myanmar could face suspension from the bloc, should members not see concrete progress ahead of the leaders’ summit.

On Saturday, Cambodian Foreign Minister Prak Sokhonn, the chair of this week's Asean meetings, said discussions among foreign ministers over Taiwan tensions were lively and included some strong arguments, but it was better disputes were handled with words.

He told a meeting of foreign ministers they must have calm, dignified, polite, and civilised discussions.

"The most important thing is that we continue to talk to each other," he told a news conference.