Earlier this month, Russian Foreign Minister Sergey Lavrov visited Myanmar and met military leaders to discuss security and economic issues, according to Russian news agency Tass. Describing Myanmar as a “friendly and long-standing partner”, Lavrov said the two nations had cooperated in a wide range of areas on the basis of a partnership which was “not affected by any opportunistic processes”.

Russia is a key supporter and arms supplier to Myanmar’s military, which seized power in February last year from the elected government of Aung San Suu Kyi. Some of the weapons are said to have been used to fight against insurgents and rebels that oppose its rule.

Artyom Lukin, an associate international relations professor at Russia’s Far Eastern Federal University, said sanctions imposed on the country since it invaded Ukraine in February had made the Kremlin “even more accommodating” towards Myanmar’s junta as both were ostracised by the West.

Since the coup, rounds of sanctions have been imposed on Myanmar’s top generals, arms brokers and several state-owned companies linked to the military.

Russia has also faced sanctions ranging from the removal of its banks from the international financial messaging system Swift to import and export restrictions.

“As long as Moscow sees the Myanmar military junta strong and stable enough, it will continue to invest in the relationship with the junta,” Lukin said.

Myanmar’s ruling generals have become increasingly isolated internationally since the coup and their violent crackdown on opponents and civilian protesters.

According to the Assistance Association for Political Prisoners NGO, 2,148 people have been killed in the crackdown, while thousands have been arrested. Last month, the military government sentenced four activists to death despite pleas from the international community not to do so.

Danil Bochkov, a fellow at the Russian International Affairs Council, said Myanmar’s poor ties with the West and the region have given Russia the opportunity to strengthen its own interests.

“Feeling regionally isolated, Myanmar naturally seeks supporters,” Bochkov said, adding that it was useful for Moscow and Beijing to gain “a local sympathiser” in the region who was dependent on Russia militarily and China economically. “Russia is also seeking to foster its diplomatic heft in the Indo-Pacific where the US is growing more active.”

In recent months, the United States has often stated it would stand united with its allies and partners in Southeast Asia in defence of a free and open Indo-Pacific. Washington in February unveiled its Indo-Pacific strategy aimed at building a free and open region, bolstering security and building resilience, with an eye on China as a threat.

Myanmar has positioned itself as Russia’s “most uncritical post-invasion partner in Asia and both countries are now gearing up for tighter economic and trade ties”, according to a report by the International Crisis Group earlier this month. 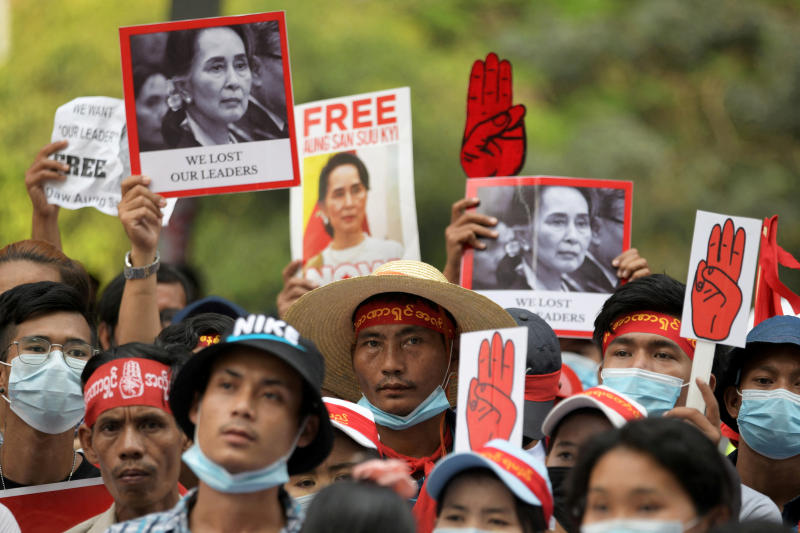 Demonstrators hold placards with pictures of Aung San Suu Kyi as they protest against the military coup in Yangon, Myanmar, on Feb 22, 2021. (Photo: Reuters)

“Russia has thrown Naypyidaw a lifeline as it struggles to quash domestic resistance and secure international legitimacy, thus further antagonising countries pushing for Myanmar’s return to democracy,” it said.

Moscow also understands that China is a “bigger and indispensable stakeholder in Myanmar and will always sync its Myanmar policy with China”, said Soe Myint Aung, founder of the Yangon Centre for Independent Research, referring to Chinese vast economic interests and strategic considerations in maintaining border stability with Naypyidaw.

Nyi Nyi Kyaw, a fellow in Germany’s Institute for Advanced Study in the Humanities, said Russia might not be gaining much materially from arms sales to Myanmar.

“Russia is just courting the Myanmar military to show the international community … that birds of the same feather flock together and the enemy of my enemy is my friend,” he said, adding it was unlikely Moscow would be concerned about the use of its weapons by the Myanmar military on its own civilian population.

According to Myanmar Witness, a London-based group, the Myanmar military has been accused of using Russian-made Yak-130 aircraft with ground attack capability against civilians, as well as cannons and unguided rockets as it seeks to stamp out opposition to its rule.

There was no reason why Russia or China should be “ashamed” of dealing with the junta in Myanmar, Lukin said.

“Is Washington ashamed when dealing with the brutal Saudi monarchy?” he asked, referring to United States interactions with Saudi Arabia, which allegedly has a poor human rights record, including President Joe Biden’s visit there last month.

Lukin also cited the example of Thailand, whose Prime Minister Prayuth Chan-ocha seized power in a coup in 2014, “but no one calls for isolating Thailand”.

Noting that Myanmar had been governed by military dictatorships for much of its postcolonial history, Lukin said Russia and China see military autocracy as an “absolutely normal” state for Myanmar, adding that a new civilian government could lean towards the West and be “less amenable to Russian interests”.

Moscow is also likely to pay “lip service” to the Five-Point Consensus drawn up by the Asean, which calls for an immediate cessation of violence and inclusive dialogue involving all parties.

“If Asean is collectively powerless to impose their demands on Myanmar, why would Russia care to join this failing effort?” Lukin said.