Photos taken on Saturday show a destroyed school in a village in the Mykolaiv region amid the Russian invasion of Ukraine. (AFP)

Small desks are topped with a layer of rubble and dust, while the front of the building, facing enemy lines, has been gutted from repeated shelling.

At the back, a collapsed roof and wall expose the school gymnasium to the elements. Charred car wrecks squat beside the battered, abandoned playground.

The Russian army has passed through the village twice since the war began and left the school intact both times, Sergiy, head of the village municipality, told AFP.

But once Ukrainian troops took up position there "the Russians realised their mistake and bombed everything," the 51-year-old said by telephone from Mykolaiv city where he now lives.

In the heavily-shelled village most roofs have now been blown off.

Only 25 residents still live there out of a population of some 1,700, he said.

By day, the streets are deserted -- the silence broken only by the nearby roar of artillery.

Ukraine launched a counter-offensive three weeks ago, but its results are still difficult to assess in the region.

On Thursday, the village received a missile strike that gouged a five-metre-deep crater in a vacant plot -- a "Russian gift", according to Lieutenant Andriy Grushelsky.

"The bomb must have weighed at least a ton. Thank God, it fell 20 metres from our camp, otherwise I wouldn't be talking to you today," he told AFP.

But the "quite beautiful" village school was less fortunate, he said.

According to Unesco, citing Ukrainian Ministry of Education figures, almost 300 schools have been destroyed since the invasion began, and over 2,550 damaged.

Sergiy fondly remembers the building where 190 children studied from kindergarten to high-school.

His wife ran its computer lab, while his eldest child was a graduate, and his youngest a pupil -- until Russia invaded seven months ago.

"We invested so much time and effort to make the school the best it could be. The classes were magnificent. Even our canteen was better than elsewhere," he said. 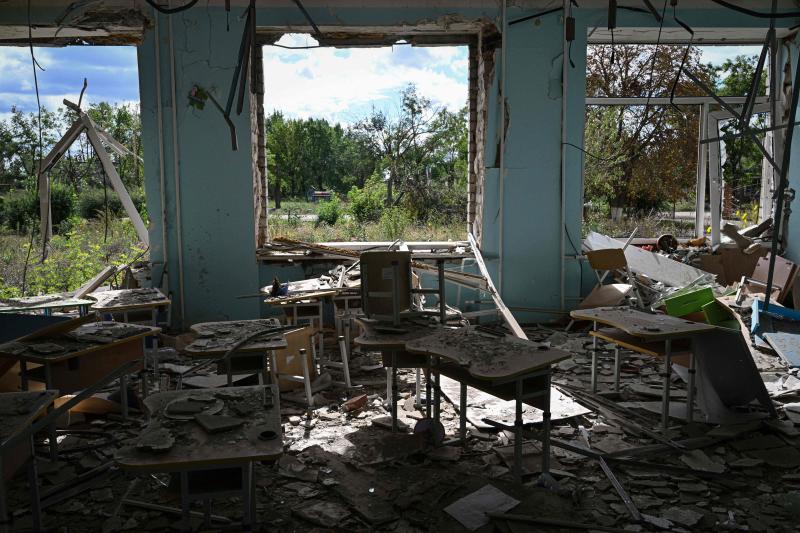 Inside what's left of the premises, letters painted beside drawings on remnants of a classroom wall look down on upturned broken furniture and books thrown across the floor.

"The Russians deliberately targeted the school. I hate them," said Sergiy.

Unesco Director General Audrey Azoulay has regularly called for "the cessation of attacks against places of education, teachers and students".

But on the ground, schools often cannot provide enough shelter, or are in disputed territory, or parents are too afraid to send their children there.

Amid all the fighting, Ukraine authorities say that some 40% of Ukrainian pupils have only started back for their school year online.

In a nearby village also visited by AFP on Saturday, a mortar shell exploded in front of a pretty brick schoolhouse, blowing out most of the windows.

"My soul is wrenched from my body when I see this destruction," said Alla Kovalenko, parent of a former pupil.

A photo on Kovalenko's phone shows her son waltzing his girlfriend at a school-leaving ceremony last year.

Now the staircase where it took place is covered in scars from bomb shrapnel.

"If I could, I would take the Russian soldiers and I would cut them millimetre by millimetre," she said bitterly.

"They not only deprive us of our schools, but also of our children's future."