Supporters of Aung San Suu Kyi, mostly Myanmar nationals, rally outside the Myanmar embassy on Sathon Road in Bangkok on July 26, 2022, to condemn the military coup and demand her release. (Photo: Nutthawat Wicheanbut)

A Myanmar junta court sentenced the country's ousted leader Aung San Suu Kyi to a further three years in prison on Thursday while also jailing an Australian economist, according to a source with knowledge of the case.

Detained since a coup in February 2021, Suu Kyi has already been convicted of corruption and a clutch of other charges by a closed court.

She and Sean Turnell received a three-year sentence under the state secrets act on Thursday.

Both had been detained since the coup in which the military ousted Suu Kyi's government, for which Turnell was an adviser.

The source added that a separate case against Turnell, under the country's immigration act, was ongoing.

The 76-year-old was in the middle of a phone interview with the BBC when he was detained after the 2021 coup.

"I've just been detained at the moment, and perhaps charged with something, I don't know what that would be, could be anything at all of course," Turnell told the broadcaster at the time.

In August of this year, he pleaded not guilty to breaching the colonial-era official secrets act during his trial in a secretive junta court — inaccessible to journalists — in the capital Nay Pyi Daw.

The exact details of Turnell's alleged offence have not been made public, though state television has said he had access to "secret state financial information" and had tried to flee the country. 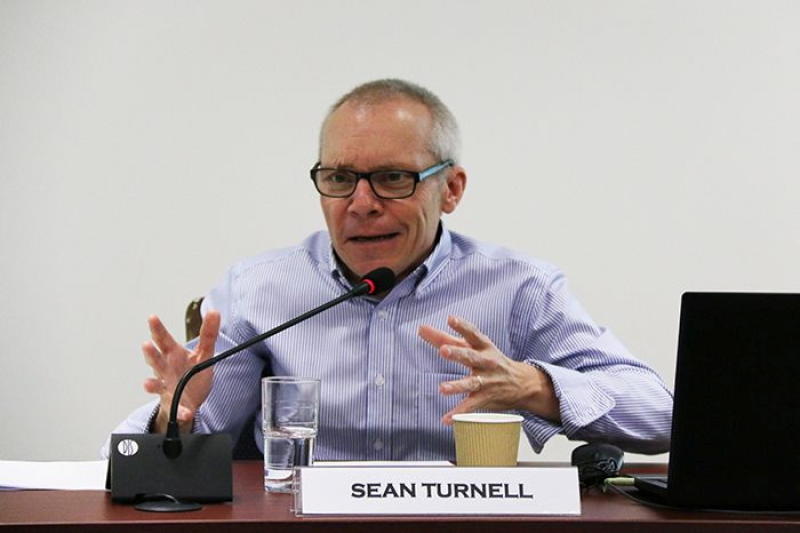 Sean Turnell discusses economic reforms by Myanmar's National League for Democracy (NLD) government at a seminar in Singapore in May 2018. (Photo: Reuters)

Myanmar has been in turmoil since the military seized power last year and ousted Suu Kyi's elected government.

Last month, the junta extended a state of emergency by six months, saying elections could only take place when the conflict-wracked country was “stable and peaceful”.

It has previously said that elections would be held and the state of emergency lifted by August 2023 — extending the initial one-year timeline it announced days after the coup.

Last year, it cancelled the results of the 2020 polls, saying it had uncovered more than 11 million instances of alleged voter fraud.

Suu Kyi has been detained since the coup and faces numerous charges that could result in her being jailed for more than 150 years.

Since the putsch last year, more than 2,200 people have been killed and 15,000 arrested in a military crackdown on dissent, according to a local monitoring group.