The defence chiefs of the United States and South Korea on Thursday warned North Korea that any nuclear attack against them by Pyongyang would "result in the end" of leader Kim Jong-un's regime as concerns grow over the isolated country's unprecedented pace of weapons tests this year.

There is also a concern that North Korea may conduct its seventh nuclear test and first since September 2017 in the run-up to the US midterm elections on Tuesday.

Lee said through an interpreter that he and Austin affirmed that any nuclear attack by North Korea, including the use of tactical nuclear weapons, is "unacceptable" and would result in the "end of the Kim Jong-un regime by the overwhelming and decisive response of the alliance."

"This is a strong warning against the DPRK," the South Korean minister said, referring to the acronym of North Korea's official name, the Democratic People's Republic of Korea.

Lee and Austin also agreed to further strengthen the bilateral alliance's capabilities and information sharing as well as its joint planning and execution to deter and respond to North Korean threats. 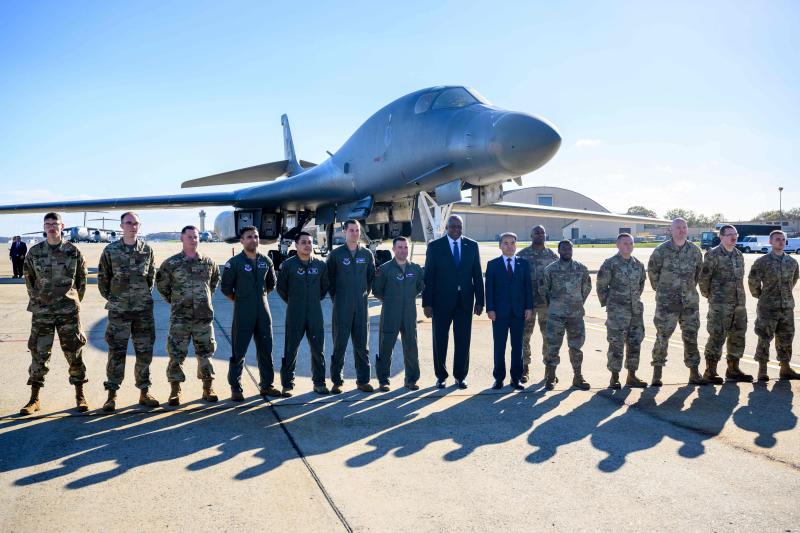 US Secretary of Defence Lloyd Austin and South Korea's Minister of National Defence Lee Jong-sup pose for a photo in front of a B-1 bomber during a visit to Andrews Air Force Base in Maryland on Thursday. (Photo: AFP)

Austin reaffirmed the US commitment to providing extended deterrence to South Korea, including through the American nuclear arsenal, and to maintain the current level of US military troops to defend its key Asian ally.

North Korea's latest missile launches appeared to be in retaliation for the first large-scale joint air exercise by the US and South Korea in five years, which began in late October.

Condemning North Korea's ICBM launch as "destabilising," Austin said the two countries have decided to extend the period of the drill known as Vigilant Storm.

On the dispatch of strategic assets such as an aircraft carrier, Austin said the Pentagon is not planning any new deployment on the Korean peninsula on a permanent basis, but said assets are expected to "move in and out on a routine basis."