The Chinese national flag flies at half-mast for the passing of Jiang Zemin, at Tiananmen Square in Beijing on Thursday. (AFP Photo)

A memorial service for Jiang will be held starting at 10am local time on Tuesday in the Great Hall of the People in Beijing and broadcast live, China Central Television (CCTV) said on Thursday.

A special flight carrying Jiang’s remains from Shanghai, where he died on Wednesday of leukaemia and multiple organ failure at age 96, was met at the airport in Beijing by President Xi Jinping.

In matching black armbands with a white flower pinned to their jackets, Xi and other top leaders bowed in coordination as Jiang was brought down the plane steps, his trademark heavy-rimmed glasses clearly visible through a glass coffin.

After being loaded into a ribbon-bedecked bus by goose-stepping soldiers, the body was taken to a hall in Beijing where it was draped with a Communist flag and surrounded by a vast flower arrangement, a CCTV broadcast showed.

The death of Jiang poses yet another challenge for President Xi, providing a potential rallying point for people disillusioned by stringent zero-Covid measures and a flagging economy. Comparisons of the two men could cast Xi in an unflattering light, observers said.

Jiang’s passing comes days after people took to the streets of numerous cities to challenge virus curbs in China’s most widespread protests in decades. While the demonstrations have since subsided, efforts to mourn the fallen leader who took steps to open the country to the world could provide a fresh impetus for gatherings that turn into a platform to criticise Xi.

“After the death of such a big figure in Chinese politics, some people may write articles, people may have gatherings, and this would be totally legal and allowed,” said Chen Gang, an assistant director and senior research fellow the East Asian Institute at the National University of Singapore.

“If such activities continue, people can make the contrast between the previous leader and the current situation. That may have a kind of backlash effect upon the current administration.”

A similar episode in April 1989 — the death of ousted Communist Party official Hu Yaobang — prompted an outpouring of public grief that morphed into extended pro-democracy protests in Tiananmen Square. By June, paramount leader Deng Xiaoping had decided to send the military into the square to quash the movement.

Deng anointed Jiang as leader in the immediate aftermath of the crackdown, as the wider world suspended ties with Beijing as punishment for the incident. Despite his association with the turmoil, Jiang went on to lead China’s return to the world stage, overseeing a period of rapid development and relative openness.

Floral tributes were laid in Jiang’s hometown of Yangzhou and nearby Shanghai, where police were deployed in force on Thursday morning around the intersections near the hospital where he was believed to have died, AFP reporters saw.

They saw a convoy of vehicles coming from the direction of the hospital at around 12.45pm, led by a car bearing what appeared to be a wreath of yellow flowers on its bonnet. The convoy then headed toward Hongqiao airport.

Police ordered pedestrians to leave the intersection an hour earlier as bussed-in bystanders gathered around the crossroads wearing drab-coloured clothing and face masks.

Pictures sent to AFP by someone living along one of the major roads nearby showed people lining the pavement holding white chrysanthemums, a traditional Chinese funeral flower.

Some held a banner saying “May you have safe travels, old classmate”.

Officials in yellow vests lined the road, with some perched on high buildings overlooking the highway.

Jiang’s legacy is mixed. Many welcomed his sunny public persona as a breath of fresh air after decades of staid communist leadership, while critics accused him of allowing rampant corruption, inequality and the repression of political activists.

In retirement, he became the subject of light-hearted memes among millennial and Gen Z Chinese fans, who called themselves “toad worshippers” in thrall to his frog-like countenance and quirky mannerisms.

More than half a million commenters flooded a post by the state broadcaster CCTV on Weibo within an hour of his death being announced, many referring to him as “Grandpa Jiang”.

Pictures on social media on Thursday showed the walls of Jiang’s old residence in Yangzhou lined with bouquets of flowers, with some people bowing as they placed them there.

The owner of a nearby flower shop told AFP she received more than 100 orders from people who wished to pay tribute, some coming from people outside Yangzhou using delivery apps.

“We are not the one with the most orders, some shops nearer got several hundred delivery orders,” she said.

One student in his 20s told AFP he had ordered flowers using the Meituan delivery app to pay tribute to “a humorous and highly educated elder”.

CCTV said Wednesday that flags would be flown at half-mast at some government buildings until the funeral.

The websites of state media and government-owned businesses turned black-and-white, as did apps including Alipay, Taobao and even McDonald’s China. (Story continues below) 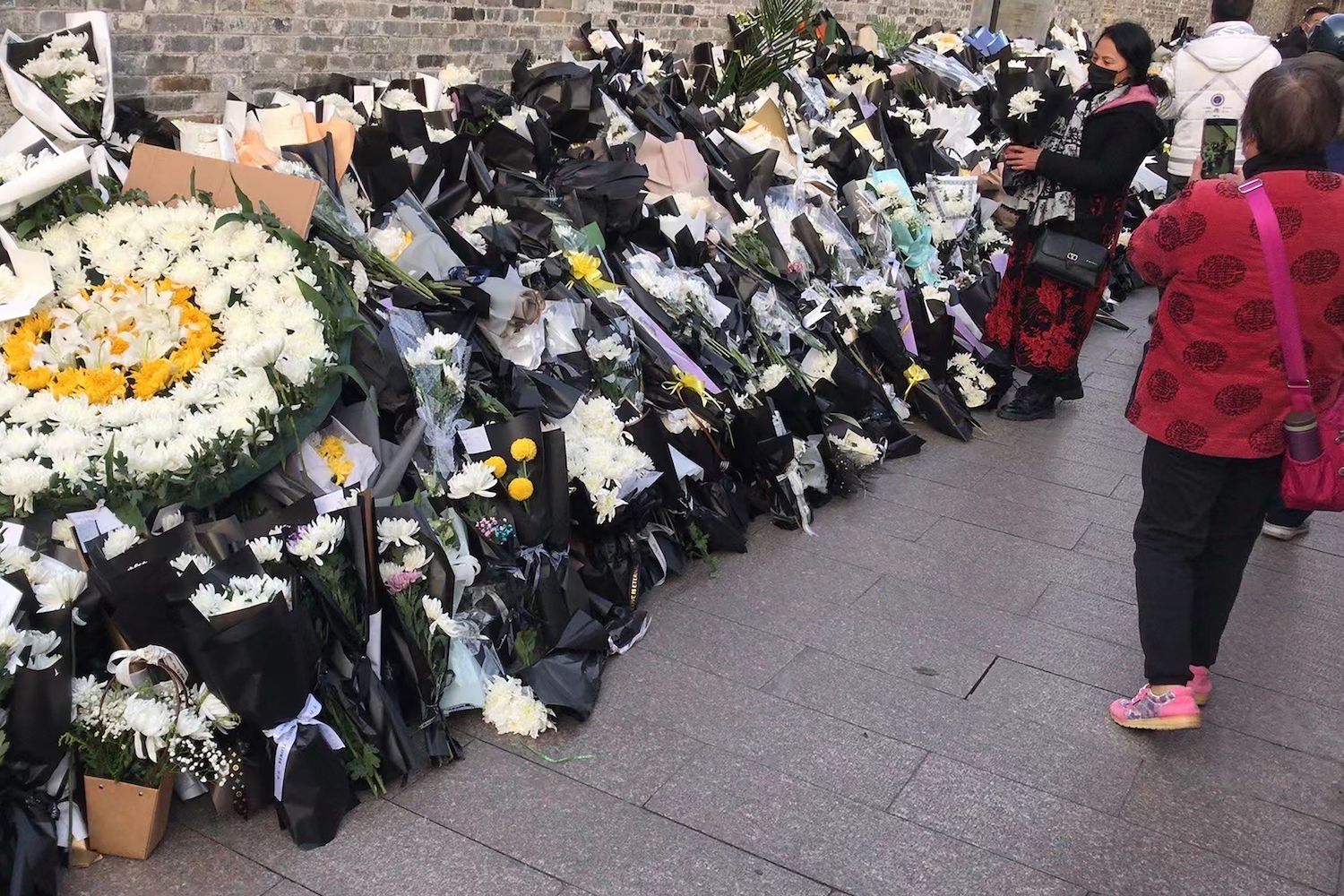 A mourner places a bouquet outside the old home of former Chinese leader Jiang Zemin, who died on Wednesday, in Yangzhou, China. (AFP Photo)

In Hong Kong, mourners who turned up early on Thursday at Beijing’s Liaison Office hoping to pay tribute were turned away because the office wasn’t ready.

After waiting nearly two hours, more than a dozen people — mostly students and professionals from mainland China — were told to come back in the afternoon.

A Hong Kong woman surnamed Chan, 50, told AFP she decided to go because she found Jiang “very easygoing and humorous”.

A mainland Chinese student queuing behind Chan was surprised.

“I didn’t expect any local Hong Kongers to commemorate him,” he said, without giving his name.

Edward, 26, a mainland Chinese student in Hong Kong, said Jiang was “the most open and educated leader”.

“He made the market economy part of the mainstream in China … without that there would be no hope for democracy,” he said.

Hundreds of people also queued to lay chrysanthemums outside the Liaison Office later on Thursday, one of the city’s coldest days this year.

An AFP reporter saw more than a dozen people distributing flowers, some of which arrived in a van, to crowds waiting a few blocks from the office.

Some of them held name lists and directed groups of people to join the queue.

IOC rejects Russian demand that its athletes compete without restrictions