SINGAPORE: Since the start of the Covid-19 pandemic, drug traffickers are increasingly attempting new ways to smuggle drugs into Singapore, the Central Narcotics Bureau (CNB) said.

These were in part to work around the coronavirus situation and restrictions, as well as to evade detection, Sng Chern Hong, CNB's deputy director of policy and administration, told CNA on Monday.

Syndicates have used drones, concealed drugs in fire extinguishers, encased them in coconuts and other fruits, and infused them into food products as they tried to bring the controlled substance across the border, he said.

"In recent years, we have come across drugs that are found in different forms. For example, cannabis infused in cakes and gummies, as well as ice [crystal methamphetamine] infused in packets of powdered drinks," he said.

The amount of cannabis seized this year has already topped last year's, and consumption of the drug is creeping back to pre-Covid levels, Sng said.

The bureau warned that regardless of the forms that controlled drugs take - in their raw format or infused into food products - they are still an offence under the Misuse of Drugs Act.

With the borders opening up following the pandemic, authorities said they are also facing more challenges in overseas drug consumption as travel resumes.

Between January and November 2022, 69 Singaporeans and permanent residents were arrested at various border checkpoints for drug offences, including cannabis abusers.

Over the past few years, cannabis laws have been relaxed in several countries - most recently, in Thailand.

Some eateries in Thailand use cannabis as ingredients, for instance in pizzas and hotpots, and several tourists have reportedly realised that their dishes contained cannabis only after consuming them.

Such cases could become more common as travelling picks up around the region, and the CNB is advising travellers to be vigilant of the food they consume, as the same penalties apply to controlled substances taken overseas.

It also cautioned travellers to be aware of ingredients in the products that they bring into Singapore.

"If you are to travel overseas … if you're going to countries where cannabis is legalised, just be careful with what you are consuming. If you're buying certain products, make sure you know what they contain," said Sng.

"And if you want to bring certain products back to Singapore, again, make sure they don't contain controlled drugs. If you are not sure, upon arrival in Singapore, you can always declare to the authorities - I think that's a safer way to go about it."

Offenders could face up to 10 years in prison, a S$20,000 fine (US$14,800), or both, for possessing or consuming cannabis. Depending on the amount, traffickers could face the death penalty. 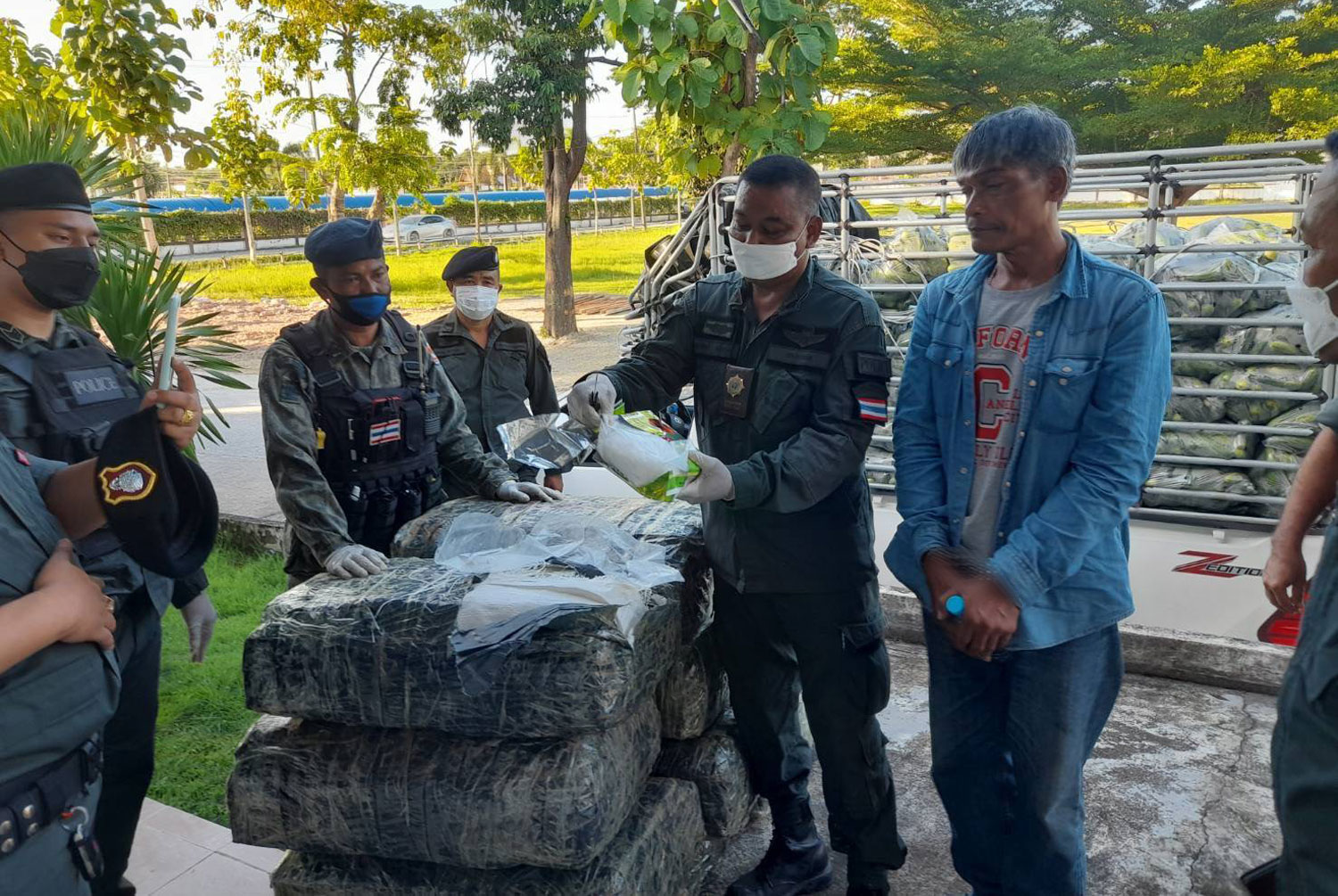 Officers inspect 390 kilogrammes of crystal methamphetamine, also known as ice, found hidden under bags of cucumbers in the bed of the pickup truck at a checkpoint in Chana district, Songkhla province, in June 2022. The investigators believed the seized drugs were destined for Malaysia and a third country. (Photo: Assawin Pakkawan)

- Drug abuse a concern among youths -

Last year, 2,724 drug abusers were arrested, including those who consumed cannabis, according to figures released by the CNB.

Of concern is the number of youth offenders - about 60% of these new abusers were aged below 30.

Authorities said that with social media and misinformation, there are worries that attitudes and mindsets are becoming more liberal towards cannabis use.

"Definitely, we are concerned about the youth situation and them turning to drugs … and we are also concerned that they are getting more liberal towards cannabis," said Mr Sng, adding that CNB is prioritising education to deter drug use.

"[This is why] a lot of effort has been put into preventive drug education - it's our first line of defence," he said.

"The harms of cannabis are very real, well documented and widely researched. The WHO (World Health Organization) and the International Narcotics Control Board have the research and statements," he said.

"For example, if a child was to consume cannabis, there would be serious health impacts - they may have respiratory depression or even a coma. For others, long-term use of cannabis can lead to mental health disorders, from anxiety to depression to schizophrenia … and abuse can lead to addiction," he added.

CNB said it is working with partners, including educators, parents and communities, to amplify the drug-free message.

"If parents can engage their children early in conversation about the harms of drugs, they stand a better chance to build up resilience against drugs," Mr Sng said.