Deputies of Vietnam's National Assembly attend the opening ceremony of the Autumn session in Hanoi, Vietnam, on Oct 22, 2018. (Photo: Reuters)

HANOI: Over the past few years, Vietnamese Communist Party Chief Nguyen Phu Trong has won praise from investors for removing corrupt officials. Now as some big names fall, it is becoming clear his campaign serves another purpose: strengthening his hand in choosing a successor.

This week Nguyen Xuan Phuc was ousted as president after assuming “political responsibility” for the “violations and shortcomings” involving two graft cases related to a manufacturer of Covid-19 test kits and repatriation flights.

Phuc — a familiar face to foreign investors who oversaw a booming economy as prime minister — was once seen as a strong contender to take over from Trong, who has been in the role since 2011.

But at a party reshuffle two years ago, Phuc lost out and was put in the largely ceremonial role as president. Trong, 78, kept his job for an unprecedented third term but failed to position his preferred conservative candidate as successor, all but assuring a leader from a rival faction seen as more reformist would one day take power.

Phuc’s ouster now opens the door for Trong to line up a successor to run Vietnam, which has recently attracted investment from companies leaving China and improved relations with the United States. The battle will take place in the run-up to a mid-term plenum in April, when a new Politburo member will be announced and there is a chance the president may be revealed then. Usually, the president is named in May after the National Assembly votes. 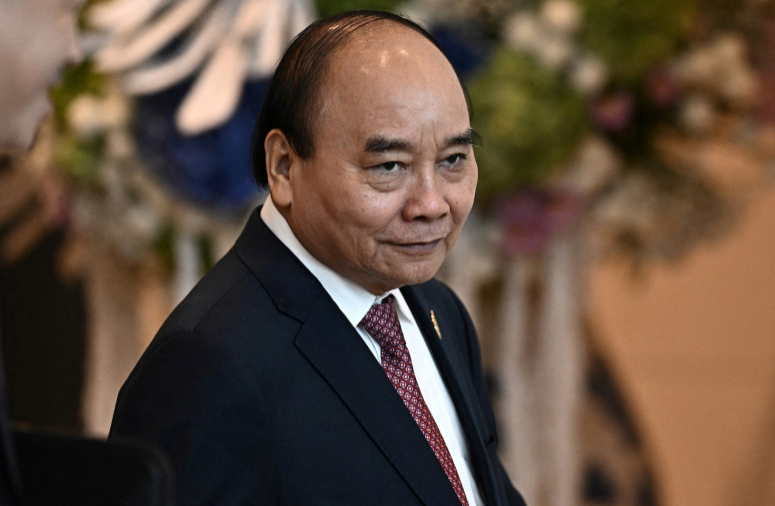 Nguyen Xuan Phuc, seen here attending the Apec summit in Bangkok in November 2022, has stepped down as president of Vietnam. (Photo: Reuters)

“There’s definitely an element of conservatism in Trong because he sees the threat from those in government who are more directly involved in business,” said Linh Nguyen, lead analyst for Vietnam at Control Risks. “He has felt the need to reorganise the party to strengthen party ideology and not let those who make decisions in business policies hold important party positions.”

Like China, which is also one-party communist state, much of what happens in Vietnam is opaque. Without formal elections, corruption purges are frequently used to oust rivals and clear the way for allies to take key positions.

Vietnam’s anti-graft push is starting to look like one by Chinese President Xi Jinping that ensnared some 4.7 million officials, including a potential successor. While Xi vowed to catch “tigers” and “flies” as part of his crackdown, Trong has likened his to a “blazing furnace.” More than 530 party members were punished in 2022 alone.

“It is a fairly murky situation,” said Peter Mumford, head of Southeast Asia at risk consultancy Eurasia Group. “There is an ideological bent to Trong’s purges, along with desire to influence succession process, but he also views corruption as a major threat to the party’s legitimacy and one that needs to be tackled, even if somewhat selectively.”

There are a handful of candidates for president, which is one of Vietnam’s four most powerful positions along with party secretary general, prime minister and head of the legislature. According to party rules, candidates for party chief must have served on the Politburo for at least one term.

One top contender is Public Security Minister To Lam, who has been carrying out Trong’s crackdowns. Lam was also the subject of social media outrage in Vietnam when a TikTok video emerged of him getting served a gold-leaf encrusted steak in London during the corruption crackdown in 2021.

It is unclear to what extent the political shakeup may impact domestic and foreign policy. Vietnam has leaned closer to the US in recent years, particularly on defence issues as China has become more assertive over disputed territory in the South China Sea.

Trong, who was the only Vietnam Communist party chief to meet a US president at the White House, last year became the first foreign leader to pay an official visit to China after Xi secured a precedent-breaking third term in office, and he has since conveyed a desire bring the relationship to “new heights.” Phuc had overseen a push to improve relations with the US and frequently met top executives and advocated for free trade during regular addresses to the World Economic Forum in Davos, Switzerland.

Asked about Phuc’s resignation this week, a senior US defence official who asked not to be identified said the outlook for ties with Vietnam remained positive. Meanwhile, the American Chamber of Commerce in Hanoi does not see drastic policy changes coming.

“The main issue for the business community is that things — licenses, permissions, etc. — have been moving very slowly as there is a lot of paranoia throughout the government these days,” said Adam Sitkoff, Amcham executive director.

Investors so far have shrugged off the news. A day after Phuc’s resignation, the stock benchmark entered a bull market, though that was largely on expectations of easing monetary policy and China’s reopening. Foreign investment last year rose 13.5% last year to US$22.4 billion.

Some investors, including Vietnam’s largest fund manager Dragon Capital, see the crackdown as burnishing the Vietnam’s investment outlook. “As evidenced by the President’s resignation, we can see that responsibility is taken at all levels of government,” the fund said in a commentary posted online. “We believe the height of the anti-corruption campaign is behind us.”

Others see more fireworks ahead. It remains likely more officials will fall in the lead up to the next party congress in 2026 as political jockeying continues, said Le Hong Hiep of ISEAS-Yusof Ishak Institute in Singapore.

“Corruption still happens and it’s likely more officials may be implicated and removed,” he said. “There are also still cases under investigation and decisions on those will be made in the coming months, so the campaign is still ongoing. They will not stop.”

Philippines to expand US access to military bases: official